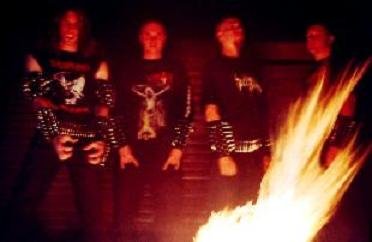 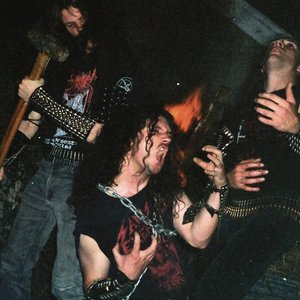 Melbourne, Victoria war metal in the raw, brutal Aussie tradition initiated by Slaughter Lord. Formed when Chris Volcano (who had already recorded a couple of rehearsal tracks with the help of fellow Deströyer 666 member Keith) and Andrew Undertaker met in November 1994 They recorded their debut demo, Barbarian War Worship, in May 1995. Gary Gestapo and Deathsaw Dave joined late the same year on bass and guitar respectively, the latter sharing live vocal duties with Andrew. By the time of their second demo, The Conqueror Possessed (recorded March 1997), Damon Bloodstom had taken over both vocal and bass duties. Dave left in 1997/98 and the remaining lineup recorded the debut album, Damnation's Prophecy (1999), after which Damon decided to concentrate on vocals. Although both Steve Undinism and Mick Warmonger did session bass spells, it was Andrew who recorded bass for the second album, Subversives for Lucifer (2001), after which Damon quit. Max Krieg replaced him in time for the filming of the promo clip for 'Renegades at Hells Command' (featured on A Collection of Noisy Motions, Osmose DVD). Valak Exhumer joined on bass mid-2002, and the third album, Nuctemeron Descent (2003), was recorded. Max quit in July 2004 due to drug-related and emotional problems. Chris took over vocal duties again and the remaining trio recorded the fourth album, The Eternal Conflagration (1996). At present, the band is in hiatus while members concentrate on other projects. Meanwhile, their demos were re-released on vinyl in May 2010 by NWN.