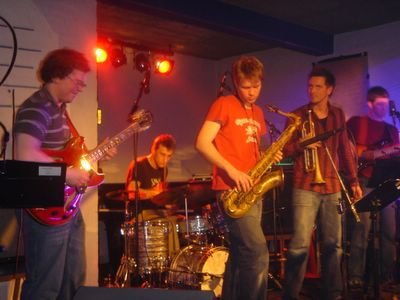 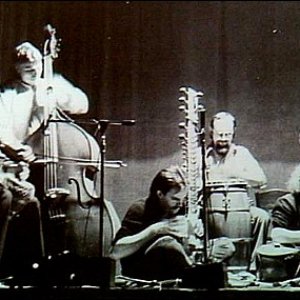 1). Amalgam (60s-80s free jazz) was a British avant garde and free jazz group that was active in the years between 1967 and 1981. The band's core member was Trevor Watts, but notable musicians such as Barry Guy, Paul Rutherford, Jon Stevens, and Jeff Clyne all played for the group. In 1969, Amalgam relesead Prayer for Peace, which is generally regarded as their master piece.

2). Amalgam (jazz quintet), was founded in Aarhus Denmark in October 2003, where the members where studying music at the Royal Conservatory of Music. Similar interest in music and approach to improvisation soon led them together and their debut concert took place in November 2003.
Three of the members (Morten Bruun, Søren Mehlsen, and Hans Christian Erbs) are Danish and two (Sigurdór Guðmundsson and Sigurður Þór Rögnvaldsson) are Icelandic.

Despite busy schedules and living in three different countries, Amalgam has managed to do tours around Iceland (2004) and Denmark (2005) as well as doing some recordings.

The music of Amalgam has no boundaries or limitations so it might be hard to label the band in one category, but creativity energy and improvisation is their forte. Elements of rock, jazz and free improvisation are obvious when one listens to their music, Latin music and funk has also its place in their spectrum of influences.

3) Amalgam (Rock) is an Australian rock band which formed in essence around 2002 they disbanded in 2004.
The group started to reform in 2006 with a change around with the line-up and started working on new material during 2006. The band was formed by Tim Organ (Guitar), Adam Hudson (Drums) and Tim Morrison (Bass). In 2007 they recruited Justin Nichol (Vocals) and started recording some demos. By the start of 2008 the band started gigging and writing more material and things were looking up.
The band released a demo EP "Entanglement" in 2007 and a Live EP "Live @ The Basement" in 2008. 2008 was the bands best year but they lost their Bass player at the end of 2008 and finally recruited Nathan Triffit in 2009 to fill the void. Unfortunately they split up at the beginning of 2010 just as things were coming together.
Home page: http://www.myspace.com/purplemunkeydishwasher
Again they reformed in 2012 and headed to the studio in November 2012 to record they're first proper EP "Better Days" the first 2 EP's being home demos and live tracks.

4) Amalgam (experimental) are a collective of composers and musicians, based in Wellington, New Zealand. In addition to presenting concerts of contemporary music, they developed collaborative approaches to music-making, and incorporated elements of theatrical presentation, creating performance pieces such as Meatworks (2000), and Simia ex machina (2003). Some of their works were also site-specific, such as the 2001 series, which included performances in a pinball arcade, and a disused military bunker complex. Much of their work incorporated electroacoustic sound with live performance, and improvisation also played an important role in their productions. No published recordings; currently inactive, but not (yet) permanently disbanded. Membership varied, including Daniel Beban, Jonny Marks, Treefrog, Philip Brownlee, Miriama Young, Craig Taylor, and others.

Hans Christian Erbs (trumpet & flugelhorn)
H.C. is a very active sideman in jazz as well as pop and rock. He recently (2006) finished his studies at the Royal Academy of Music in Aarhus. H.C. has for the past couple of years been working extensively as an ensemble player as well as a soloist with his own bands. A very accomplished player and whose playing has a strong lyrical side to it.

Morten Bruun (tenor and soprano saxophones, clarinet)
Morten is a member of the award winning group "Paven". Finds his inspiration from modern tenor players like; Joe Lovano, Chris Speed.
Morten has despite his young age already worked and played alongside notable musicians as: Alex Riel, Hugo Rasmussen and Jakob Dinesen to mention a few. Morten is studying music at The Royal Academy of Music
in Aarhus.

Sigurdor Guðmundsson, (electric bass)
Sigurdor graduated spring 2004, from The FIH (Icelandic Musicians Union) School of Music. He also graduated from the music teacher line at the same school spring 2003. Been a music teacher since 2001 Exchange student at The Royal Academy of Music, Aarhus, autumn 2003. Sigurdor has played in various cover bands through the years, playing pop, rock, funk and jazz. He played fusion/funk and jazz at the Reykjavík Jazz Festival in 1995 and 2001. Sigurdor is currently active on the jazz/improvisation scene in Reykjavík, along with playing in various pop and jazz projects. He finds inspiration and influences from e.g. Jaco Pastorius / Weather Report, Skuli Sverrisson, AlasNoAxis, and various jazz, rock, soul and funk music.

Sigurdur Thor Rognvaldsson (electric guitar)
Sigurdur (Siggi) graduated from "FIH School of Music" spring 2004. He graduated as a music teacher, from the same school in spring 2003. Siggi has been a music teacher for few years. Siggi played with the Icelandic jazz quartet "Auto Reverse" at the "Young Nordic Jazz Comets 2004" in Stockholm. A member of Icelandic post-rock band Kuai, which has released one CD, they have been active on the music scene in Reykjavik. Warm up band at "Reykjavik Mini-festival" for the American post-rock band "Blonde Redhead" in Laugardalshall (Reykjavik Sports Arena). Siggi has also played in various jazz and rock projects. Siggi is currently studying music at the Academy of Music in Gothenburg, where is also busy playing in various bands.

Søren Mehlsen (drums)
Søren is a versatile all styles drummer. He is currently studying at the Royal Academy of Music in Aarhus. Søren is a member of the Danish jazz group Paven, which won the Danish youth jazz award "Ung Jazz 2003". Søren plays with a wide variety of smaller and larger groups in Aarhus and is known for his amazing energy and playfulness. He'll be going on tour around Denmark with alto and baritone saxophonist, composer, and bandleader Tim Berne, which will take place in the fall of 2006.