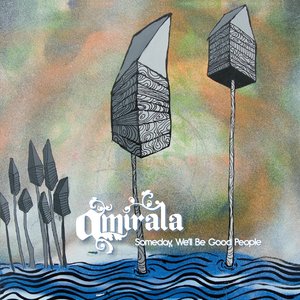 One time, Amirala (Am-ur-rah-lah) rocked out so hard, the universe collapsed in on itself to a singularity, which simultaneously destroyed and created all matter that exists today. In 2007, the continuum of time allowed the members to meet up and form (again). Some time in the next 10,000 years, the universe will again collapse in on itself, and Amirala will be to blame.

Amirala traveled the ancient silk roads in the times of Marco Polo. ACDC later used this travel story as inspiration for their “Long Way to the Top” video.

Amirala were the last men standing at Thermopylae. The Verve later used this event as inspiration for their “Bittersweet Symphony” video.

Amirala were involved in a complex diamond heist in the late 90's, involving Antwerp, London and New York. Guy Ritchie later used this story as inspiration for his movie “Snatch”.

Knowing all too well they are creators and destroyers of the universe, Amirala have titled their new EP "Someday, we'll be good people", in an attempt to gain favour of philosophers, physicists and music fans alike. Despite this blatant lie, purchase of this album is the only way the universe has a chance of continuing.

For more news, gigs and information, go to: http://www.facebook.com/amiralaband