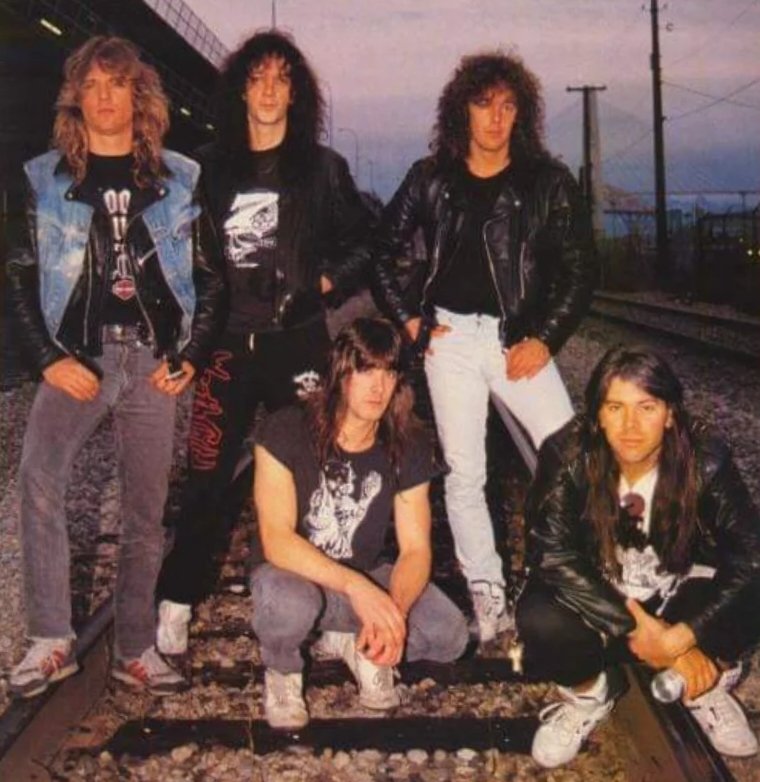 Annihilator is a Canadian thrash metal band founded in 1984 by vocalist, guitarist, bassist, songwriter, engineer, producer, mixer, mastering engineer Jeff Waters and former vocalist John Bates. They are the highest-selling heavy metal group from Canada in Canadian history, having sold more than 3 million albums worldwide, although most of their sales have been generated outside of the band's home country. Their first two studio albums, Alice in Hell and Never, Neverland, are considered to be influential Canadian heavy metal records.

Since its inception, Annihilator has released fifteen studio albums and has undergone many line-up changes. Waters is the only remaining original member of the band, and sometimes assembles touring musicians to perform with him. Their latest studio album, Suicide Society, was released in 2015.

History
Early career (1984–1988)
Annihilator was formed in Ottawa, Ontario, Canada by Jeff Waters in 1984. Waters later wrote on his Facebook page that he named the band after the tank that Eddie Murphy's character rode on in the 1984 film Best Defense. Waters wrote and recorded the song Annihilator (not to be confused with the song of the same name released on the 1994 album, King of the Kill) with singer John Bates. This original version of "Annihilator" was released on the special edition of the 2005 album Schizo Deluxe.

Waters and Bates then recruited drummer Paul Malek and bassist Dave Scott. This lineup lasted a year, producing a demo titled "Welcome to Your Death" during their time together. The demo received worldwide recognition and became highly sought after. After John Bates and Dave Scott left the band before its release, citing "artistic differences" and "personality conflicts", Jeff Waters and drummer Paul Malek recorded another successful demo titled Phantasmagoria in 1986. This was said to be the third most-traded metal cassette tape in the 1980s, behind Metallica and Megadeth's demo tapes. Some songs written at this time, by Jeff Waters and John Bates, ended up on Annihilator's first two official studio albums (Alice in Hell and Never, Neverland).

A third demo was recorded by Waters and Malek in 1987 and was sent only to labels. It included more songs that would end up on the first two Annihilator studio albums. Waters relocated to Vancouver in 1987, where he assembled an entire line-up, including drummer Ray Hartmann and former D.O.A. bassist, Randy Rampage, on vocals. In 1988 and 1989, Waters was in and out of a recording studio recording guitar and bass tracks and producing what would become the band's debut album. Once the album was finished, he hired bassist Wayne Darley and guitarist Anthony Greenham.

Rise to fame (1989–1993)
The band gained more recognition within the metal community after releasing their debut album Alice in Hell, in 1989. Annihilator embarked on their first world tour, opening up for Testament along with Onslaught in the US and Canada, after which singer Randy Rampage quit the band to retain his seniority at a job on the shipping docks in North Vancouver.

Without a singer, Jeff Waters found ex-Omen singer Coburn Pharr and the band released their second album, Never, Neverland, in 1990. The album's sales surpassed Alice in Hell, becoming the band's only album to chart in the UK at No. 48. After opening up for Judas Priest, and then little-known Pantera and headline tours around the world, Hartmann and Pharr left the band and were replaced by Mike Mangini (though the band would find a more permanent replacement in Randy Black) and Aaron Randall, respectively. The band was signed to Sony USA by this point.

The band's third studio album, Set the World on Fire, distributed by Epic Records, was released in 1993 and was successful in Europe and Asia, but did poorly in the US. Bassist Wayne Darley had to leave the band in August 1993 as he was unable to enter Japan, where the band was touring in support of the album. Annihilator was among the many metal bands dropped by Roadrunner Records (and most other labels) that year.

Brief hiatus and later years (1994–1998)
The line-up then dissolved, but Jeff Waters kept the band name going when he, along with drummer Randy Black recorded and released King of the Kill in 1994. This album was more of a solo album for Waters, as it featured himself performing all instruments and writing most of the album's material apart from playing the drum tracks, which were recorded by Randy Black. Bassist Cam Dixon later joined the band followed by Lou Bujdoso from Meatwagon who went on to tour and perform during the King of the Kill and Refresh the Demon tours. Jeff Waters continued performing lead vocals until 1997. The band released Refresh the Demon, which was, for the most part, a return to the speed and technicality of the band's earlier days, in 1996 and Remains, a more industrial metal-oriented album which turned out to be the biggest flop of the band's career, in 1997.

By the time Remains was being recorded, Waters was the sole remaining band member. The album featured an electric drum machine (programmed by Jeff Waters, of course) and there was no tour in support of it.

Continued career (1999–present)
Annihilator did not play again until 1999, when Waters decided to reunite the Alice in Hell line-up to record another album. All members apart from Wayne Darley, who had health problems, agreed to reunite. Bassist Russ Bergquist joined the band in Darley's place. This lineup released Criteria for a Black Widow and toured successfully. However, Rampage was fired following the tour for his erratic and often drunken behaviour. Former Overkill guitarist and Liege Lord frontman Joe Comeau replaced him on vocals, while Curran Murphy replaced Davis on guitar and Randy Black rejoined on drums.

During the early 2000s, Annihilator released the albums Carnival Diablos (2001) and Waking the Fury (2002), both triumphant thrash metal masterpieces. After considerable success, the band's lineup once again dissolved. Following years of line-up changes, Jeff Waters decided to work with a touring-only lineup so he recruited Dave Padden as a permanent vocalist/rhythm guitarist, while Waters recruited touring bassists and drummers. Annihilator's first two albums in this three-man band format as Waters played both bass and guitar, with Padden on vocals and a hired drummer were All for You (2004) and Schizo Deluxe (2005). Mike Mangini rejoined for the former album in 2004 and Tony Chappelle was hired for the latter's recording in 2005.

In 2007, Annihilator released their twelfth album Metal. It features several guest performers, such as Corey Beaulieu (Trivium), Willie Adler (Lamb of God) and Jeff Loomis (Nevermore). The band's self-titled thirteenth album was released in 2010, coming to be in a more modern thrash metal-styled sound.

Annihilator returned to Canada for two live shows; the first time the band has played live in North America since 1993. On July 10, 2011, Annihilator headlined the Quebec City Imperial Theatre to a sold-out crowd. Annihilator played the main stage (along with KISS and Motörhead) on July 24, 2011 at Montreal's Heavy MTL Festival.

In the summer of 2014, Oscar Rangel replaced Al Campuzano, their bassist since 2010. Jeff Waters said on his Facebook that he had actually contacted Wayne Darley, the bands bassist from the classic early 90's lineup, about having him rejoin, although once again he declined, in Jeff's words "Wayne wanted to do it but couldn't … personal reasons." The band has continued their touring cycle since then.

Dave Padden left the band sometime in December of 2014, telling Jeff Waters over a telephone call that he was sick of constant touring and the lifestyle he was living in Annihilator and citing the biggest contributing factors were that he was away from his family too much and he had not been happy being in the band over the past five years, despite Waters' offers of more money after the next record was done. Waters then had to refrain from booking Padden's flight from Vancouver to Ottawa, admitting in a German radio interview he was emotionally shaken as well. After taking a couple of weeks' time and looking at various singers, Waters decided that he would handle vocals himself in addition to doing everything but play drums in the studio. The information was not made public until six months later, in June 2015, when Waters made the post on Annihilator's Facebook page, but attaching a YouTube link directly below of audio snippets from various songs on the band's then-upcoming album, Suicide Society.

Never, Neverland singer, Coburn Pharr surprised audiences when he returned for a short time on 70000 Tons of Metal concert in January 2015. Coburn will only sing, Reduced to Ash, The Fun Palace, I Am in Command, Road to Ruin and Stonewall.

By April 2015, Annihilator had begun work on their fifteenth studio album. Waters stated that the album's musical direction would be "something quite different." The album, titled Suicide Society, was released on September 18, 2015.