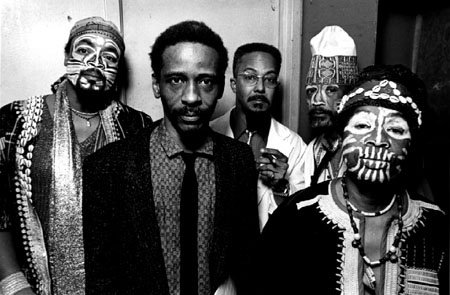 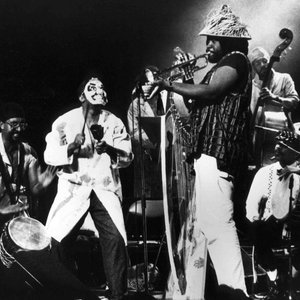 The Art Ensemble of Chicago is an avant-garde jazz ensemble closely identified with the Association for the Advancement of Creative Musicians (AACM) since the mid 1960s. The group continues to tour and record, despite the deaths of two of the founding members. The original lineup was founder Roscoe Mitchell and Joseph Jarman on reeds, Lester Bowie on trumpet, and Malachi Favors on bass. They worked with a succession of drummers recruited from Chicago and St. Louis, until Famadou Don Moye joined as the permanent drummer upon their return from their three year residency in Paris, 1969-1971.

The Art Ensemble embodied the AACM motto "Great Black Music, Ancient to the Future" with their use of costumes and face paint in performance plus the adventurous improvisation, the use of folk music and instruments, swing, and a variety of musical expression that made them hard to pin down to a specific genre.
The listener is engaged by the Ensemble's multi-instrumentalism, especially the use of what they term "little instruments" in addition to the traditional jazz lineup; "little instruments" can include bicycle horns, bells, birthday party noisemakers, wind chimes, and a vast array of percussion instruments (including found objects). These two characteristics combine to make the ensemble's performances as much a visual spectacle as an aural one, with each musician playing from behind a large array of drums, bells and other instruments.

The newest additions to the Art Ensemble are Corey Wilkes on trumpet and Jaribu Shahid on bass. The group is clear in saying that the two are in no way meant to replace the late Lester Bowie or Malachi Favors, but that they felt that the sounds, voices, timbres and rhythms of these two are consonant with the overall inegrity of the Art Ensemble.