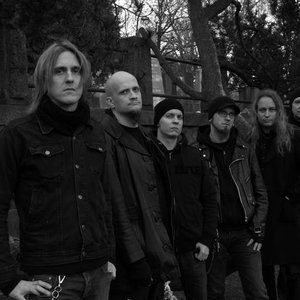 Barren Earth was formed in Helsinki, Finland in the autumn of 2007. This new ambitious, progressive death metal band was originally conceived in late 2006. With a head full of new, brutal, yet melodic songs, Olli-Pekka Laine (ex-Amorphis, Mannhai) asked drummer Marko Tarvonen (Moonsorrow), to form a new progressive death metal group with him. Around 2005 Tarvonen, keyboardist Kasper Mårtenson (ex-Amorphis, Ben Granfelt Band) and Laine played in a prog-rock project called The Camel Gang (influenced by The James Gang and English prog-rock band Camel), so they knew they already had the chemistry. Tarvonen agreed to go for it, Mårtenson and guitarist Janne Perttilä joined the band as well, and little by little things started snowballing towards the first incarnation of Barren Earth.

At the end of 2007 Tarvonen, Laine, Mårtenson and Perttilä gathered together, and laid down the final plans. Still lacking a lead guitarist, the guys called their old friend Sami Yli-Sirniö (Kreator, Waltari), as they knew his playing style to be a perfect match. Rehearsals began immediately, and by the summer of 2008, Barren Earth found themselves in the studio, recording the four first songs they had put together. When it came down to finding a vocalist, the name of Mikko Kotamäki (Swallow The Sun) popped up. The band knew that Kotamäki’s skills in growling and singing were what the fresh promotional recording screamed for. Luckily he agreed to join, and Barren Earth had found its final form.

The music of Barren Earth combines elements of modern and traditional death metal, with 70's prog rock and folk. Among the band's influences are artists like Paradise Lost, Opeth, Pink Floyd, Jethro Tull and also some pioneers of Finnish prog.

The members' individual backgrounds in many internationally known and acclaimed outfits is a testament to the quality of the band's music. These same backgrounds are obviously also echoed in Barren Earth's music.

In January of 2014 Barren Earth announced that Faroese native Jón Aldará will replace Mikko Kotamäki as the lead vocalist.