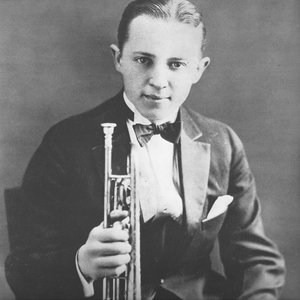 It was widely believed, for many years, that Beiderbecke's real name was Leon Bismark Beiderbecke. It is now known that this — like so many other myths about Beiderbecke — is untrue. His real name was Leon Bix Beiderbecke. Bismark was a family name, reflecting the family's German origins, but it was not given to Beiderbecke. "Bix" was a family nickname of his father and older brother, given him as a proper name.
Leon Bix Beiderbecke was born in Davenport, Iowa to a middle-class family. As a teenager he would sneak off to the banks of the Mississippi to listen to the bands play on the riverboats that would come up from the south.

Partially due to frequent absences due to illness, Beiderbecke's grades suffered. His parents felt that sending him to the exclusive Lake Forest Academy in Lake Forest, Illinois, just northwest of Chicago, would provide the attention and discipline needed to improve his schooling.

Beiderbecke's schooling there soon suffered when the only subjects he showed avid interest in were music and sports. Bix soon began going into Chicago as often as possible to catch the hot jazz bands of the day at clubs and speakeasies around Chicago, and too often didn't return in time or was found out the next day.

Beiderbecke was soon asked to leave the Academy due to his academic failings and extra-curricular activities in Chicago, and began his musical career in earnest.

Beiderbecke first recorded with his band "The Wolverine Orchestra" (usually called just The Wolverines, named for "Wolverine Blues" by Jelly Roll Morton because they played it so often) in 1924, then became a sought-after musician in Chicago, Illinois and New York City, New York. He made innovative and influential recordings with Frankie Trumbauer ("Tram") and the Jean Goldkette Orchestra. When the Goldkette Orchestra disbanded after their last recording ("In My Merry Oldsmobile"), in May 1927, Bix and Trumbauer, a 'C' Melody and alto saxophone player, briefly joined Adrian Rollini's band at the Club New Yorker, New York, before moving on to the Paul Whiteman Orchestra, the most popular and highest paid band of the day.

Beiderbecke suffered health problems from an early age, though the relentless schedule of the road and heavy drinking leading to alcoholism began to contribute to and exacerbate a decline in his health. Bix suffered from severe pain in his legs and other ill effects of prohibition era alcohol and with declining work around the New York City area, he took a turn for the worse.

Though his death certificate described the cause of death as pneumonia, and he was in seriously ill health, the circumstances immediately surrounding his death are still unclear. He died at the age of 28, in his apartment at 43-30 46th Street, Sunnyside, Queens, within the confines of the City of New York on August 6, 1931.