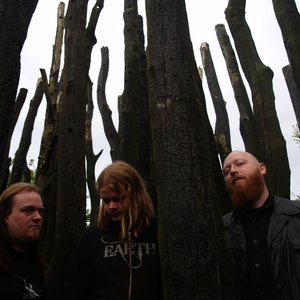 Black Wreath was formed in Copenhagen, Denmark in 2002 by Kim Larsen (Of The Wand and The Moon, Solanaceae, The Loveless, ex-Saturnus), Peter Mesnickow (Blazing Eternity) and Dave Müller (Tidebound, Chasing Eudaimonia, ex-Whelm) due to their common passion for heavy, depressive, monotonous doom metal.

However, it wasn’t until 2006 that the band found the time to create music and lyrics for their debut album A Pyre of Lost Dreams.

In July 2008, Black Wreath entered Soundscape Studios with engineer Louise Nipper to record the album, resulting in 4 tracks with a playing time of over 50 minutes of pure, bleak, desolate darkness.

The three epic songs The Black Holes Of Your Mind, Nocturnal Dominion and Solitude Rising (Missing All Exits) are all heavy, hypnotic journeys into the underworlds of death, solitude, depression, drugs, funerals and darkness, whereas album closer Níđstöng is a very haunting atmospheric ambient piece. The songs however, have a big melodic touch thanks to the well-known signature sound of Kim Larsen. In general, a mixture of funeral doom, doom/death and more hypnotic, monotone soundscapes.

"A Pyre Of Lost Dreams" was released in November 2009 on Head Not Found Records.

An extract from the album can be heard at the bands official myspace site: www.myspace.com/blackwreath