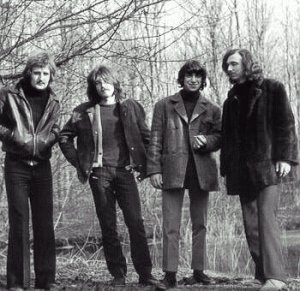 There are at least two acts named Brainbox:

1. The Dutch Brainbox is a late 1960's/early 1970s Dutch rhythm & blues/psychedelic band that recently re-united. Star guitarist Jan Akkerman and drummer Pierre van der Linden were in Brainbox before they went on to form the internationally succesful Focus. The original Brainbox' main 'weapon', however, was the characterful, high-pitched voice of frontman, Kaz Lux.

The group's 1970 début LP, Brainbox, was a major success in The Netherlands. Down Man was also a modest hit in the United States.

Shortly after the release of the début album, Akkerman and Van der Linden left the band to form Focus. Less than a year later, in 1971, frontman Lux also left the group, which then released a second studio album, Parts (1972), with a line-up that had changed beyond recognition. The album was, therefore, not fully acknowledged as a Brainbox album by fans.

2. The Canadian Brainbox is Tom Third, who has worked as a professional composer for 20 years. He studied film and new media at The Ontario College of Art and Design and In 1991 signed an international recording deal with Nettwerk Records that has yielded three critically acclaimed electronica albums Transcontinental Weekend (1992), Primordia (1994) and Continuous City (2001).

As a film composer, Third’s music employs an innovative combination of traditional instruments with electronic and digitally manipulated sounds. He co-wrote songs sung by Gary Busey and rapper Ice-T for the feature 'Jacob Two Two And The Hooded Fang' in 1999, and then scored the feature 4 DAYS starring Colm Meaney the same year. An ongoing commitment to the short and experimental film community has resulted in many soundtracks for award winning films and installations that have been shown at film festivals and art galleries worldwide.

In 2000 he scored 22 episodes of the television series 'Queer as Folk' and won the MPSE Golden Reel Award for music editing. Subsequent projects have included 52 episodes of 'ReGenesis', the award winning drama produced by Shaftesbury Films in Toronto. Other recent assignments include the acclaimed six episode drama, 'Durham County', for The Movie Network, several episodes of 'The Nature Of Things' for the CBC. Tom’s newest project is the score for 'The Listener', a new series on NBC, FOX and CTV that has been released in 180 territories. In 2004 Tom won the Volkswagen Score Competition sponsored by the Berlin Film Festival, and juried by Walter Murch, David Holmes, and Martin Steyer.