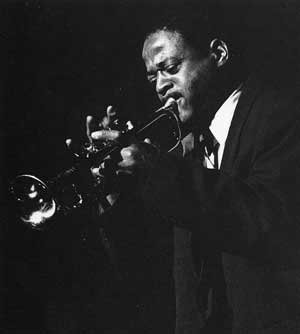 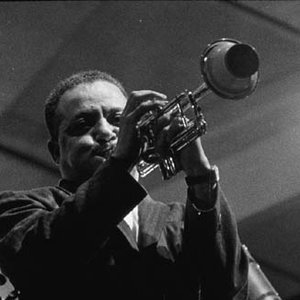 Clark Terry (December 14, 1920 – February 21, 2015) was an American swing and bebop trumpeter, a pioneer of the flugelhorn in jazz, educator, and NEA Jazz Masters inductee.

Terry was born in St. Louis, Missouri, in 1920. He attended Vashon High School and began his professional career in the early 1940s, playing in local clubs. He served as a bandsman in the United States Navy during World War II.

Blending the St. Louis tone with contemporary styles, Terry's years with Basie and Ellington in the late 1940s and 1950s established his prominence. During his period with Ellington, he took part in many of the composer's suites and acquired a reputation for his wide range of styles (from swing to hard bop), technical proficiency, and good humor. Terry influenced musicians including Miles Davis and Quincy Jones, both of whom acknowledged Terry's influence during the early stages of their careers. Terry had informally taught Davis while they were still in St Louis.

After leaving Ellington, Clark's international recognition soared when he accepted an offer from the National Broadcasting Company (NBC) to become its first African-American staff musician. He appeared for ten years on The Tonight Show as a member of the Tonight Show Band, first led by Skitch Henderson and later by Doc Severinsen, where his unique "mumbling" scat singing led to a hit with "Mumbles". In the 1980s he was a featured soloist performing in front of the band. In November 1980 he was a headliner along with Anita O'Day, Lionel Hampton and Ramsey Lewis during the opening two-week ceremony performances celebrating the short-lived resurgence of the Blue Note Lounge at the Marriott O'Hare Hotel near Chicago. He was introduced to great acclaim by Chicago jazz disc-jockey Dick Buckley.

Terry continued to play with musicians such as trombonist J. J. Johnson and pianist Oscar Peterson, and led a group with valve-trombobist Bob Brookmeyer that achieved some success in the early 1960s. In February 1965 Brookmeyer and Terry appeared on BBC2's Jazz 625. In the 1970s, Terry concentrated increasingly on the flugelhorn, which he plays with a full, ringing tone. In addition to his studio work and teaching at jazz workshops, Terry toured regularly in the 1980s with small groups (including Peterson's) and performed as the leader of his Big B-A-D Band (formed about 1970). After financial difficulties forced him to break up the Big B-A-D Band, he performed with bands such as the Unifour Jazz Ensemble. His humor and command of jazz trumpet styles are apparent in his "dialogues" with himself, on different instruments or on the same instrument, muted and unmuted. He occasionally performed solos on a trumpet or flugelhorn mouthpiece.

From the 1970s through the 1990s, Terry performed at Carnegie Hall, Town Hall, and Lincoln Center, toured with the Newport Jazz All Stars and Jazz at the Philharmonic, and was featured with Skitch Henderson's New York Pops Orchestra. In 1998, Terry recorded George Gershwin's "Let's Call the Whole Thing Off" for the Red Hot Organization's compilation album Red Hot - Rhapsody, a tribute to George Gershwin, which raised money for various charities devoted to increasing AIDS awareness and fighting the disease. In 2001, he again recorded for the Red Hot Organization with artist Amel Larrieux for the compilation album Red Hot - Indigo, a tribute to Ellington.

Prompted early in his career by Dr. Billy Taylor, Clark and Milt Hinton bought instruments for and gave instruction to young hopefuls, which planted the seed that became Jazz Mobile in Harlem. This venture tugged at Terry's greatest love: involving youth in the perpetuation of jazz. From 2000 on, he hosted Clark Terry Jazz Festivals on land and sea, held his own jazz camps, and appeared in more than fifty jazz festivals on six continents. Terry composed more than two hundred jazz songs and performed for seven U.S. Presidents.

Terry was a resident of Bayside, Queens, and Corona, Queens, New York, later moving to Haworth, New Jersey, and then Pine Bluff, Arkansas.

A 2014 documentary Keep on Keepin' On follows Clark Terry over four years to document the mentorship between Terry and 23-year-old blind piano prodigy Justin Kauflin as the young man prepares to compete in an elite, international competition.

On February 13, 2015, it was announced that Terry had entered hospice care to manage his advanced diabetes. On February 21, 2015, Clark Terry died surrounded by his family, students and friends.

His wife Gwen wrote: "Our beloved Clark Terry has joined the big band in heaven where he'll be singing and playing with the angels. He left us peacefully, surrounded by his family, students and friends … Clark will live in our hearts forever."

Writing in The New York Times, Peter Keepnews said Terry "was acclaimed for his impeccable musicianship, loved for his playful spirit and respected for his adaptability. Although his sound on both trumpet and the rounder-toned flugelhorn (which he helped popularize as a jazz instrument) was highly personal and easily identifiable, he managed to fit it snugly into a wide range of musical contexts."

Writing in UK's The Daily Telegraph, Martin Chilton said, "Terry was a music educator and had a deep and lasting influence on the course of jazz. Terry became a mentor to generations of jazz players, including Miles Davis, Wynton Marsalis and composer-arranger Quincy Jones."

Interviewing Terry in 2005, fellow jazz trumpeter Scotty Barnhart said he was "..one of the most incredibly versatile musician to ever live… a jazz trumpet master that played with the greatest names in the history of the music…"

Over 250 awards, medals and honors, including:

Inducted into the Jazz at Lincoln Center Nesuhi Ertegun Jazz Hall of Fame (2013)
The 2010 Grammy Lifetime Achievement Award, two Grammy certificates, three Grammy nominations
The National Endowment for the Arts Jazz Master Award (1991)
Sixteen honorary doctorates
Keys to several cities
Jazz Ambassador for U.S. State Department tours in the Middle East and Africa
A knighthood in Germany
Charles E. Lutton Man of Music Award, presented by Phi Mu Alpha Sinfonia Fraternity in (1985). Terry was awarded honorary membership in the Fraternity by the Beta Zeta Chapter at the College of Emporia (1968). He was also made an honorary member of the Iota Phi chapter of Kappa Kappa Psi, National Honorary Band Fraternity (2011).
The French Order of Arts and Letters (2000)
A life-sized wax figure for the Black World History Museum in St. Louis
Inducted into the St. Louis Walk of Fame (1996)
NARAS Present's Merit Award (2005)
Trumpeter of the Year by the Jazz Journalists Association (2005)