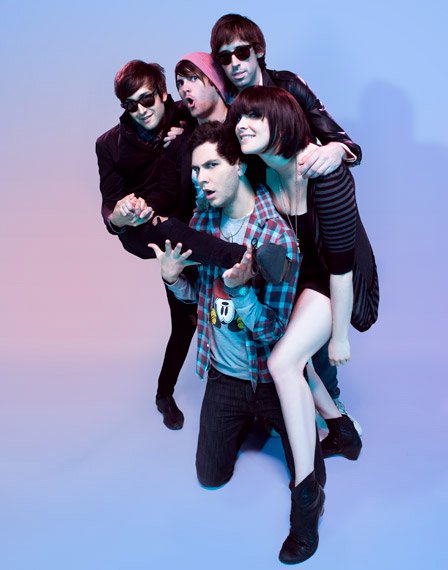 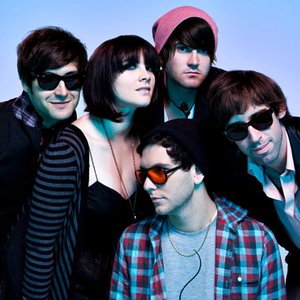 Cobra Starship was an American pop band created by former Midtown bassist and lead vocalist Gabe Saporta in 2003 in New York City. Other members were guitarist Ryland Blackinton, bassist Alex Suarez, drummer Nate Novarro, and keytarist Victoria Asher, all of whom provided backing vocals. The group released their debut album, While the City Sleeps, We Rule the Streets in 2006, which they followed with ¡Viva la Cobra! in 2007. They then released Hot Mess in 2009. The group is perhaps best known for their singles "Snakes on a Plane (Bring It)", "Good Girls Go Bad (feat. Leighton Meester)", and You Make Me Feel... (feat. Sabi). The band's fourth studio album, Night Shades was released August 29, 2011 release with the first single "You Make Me Feel... (feat. Sabi)".

While the City Sleeps, We Rule the Streets (2006–2007)
Cobra Starship was formed in 2005 after Midtown bassist Gabe Saporta took a trip to the deserts of Arizona. During this time, Saporta went on a "vision quest", spending time with Native American tribes and smoking peyote. He began to create his vision for a new band, a melodic style of music heavily influenced by synthpop and hip-hop. Upon returning home, Saporta rented a house in the Catskill Mountains and began writing what would become the band's debut album, While the City Sleeps, We Rule the Streets. He posted a parody response to Gwen Stefani's "Hollaback Girl" titled "Hollaback Boy" on Myspace. The song gained Saporta notoriety on the internet and he eventually signed to Fall Out Boy bassist Pete Wentz's label, Decaydance Records.
Midtown's management company soon set Saporta up with an opportunity to record a song for the soundtrack to the 2006 Snakes on a Plane. Along with members of The Academy Is..., Gym Class Heroes, and The Sounds, Saporta recorded "Snakes on a Plane (Bring It)", which became a minor hit. During the recording of While the City Sleeps, We Rule the Streets, Saporta began recruiting new members to complete the group's lineup. He first enlisted drummer Nate Navarro, whom he met on tour while Navarro sold merchandise for fellow touring act Hidden In Plain View. After seeing Saporta in Entertainment Weekly, guitarist Ryland Blackinton and bassist Alex Suarez, who lived in the same apartment building as Midtown drummer Rob Hitt, emailed Saporta asking to join the group. The lineup was completed by keytarist Elisa Schwartz, who was later replaced by Victoria Asher.
While the City Sleeps, We Rule the Streets, was released October 10, 2006. It featured the single "Snakes on a Plane (Bring It)", of which a video had been featured during the closing credits of the film Snakes on a Plane earlier that summer.

¡Viva La Cobra! (2007–2008)
Cobra Starship released their second album, ¡Viva La Cobra!, on October 23, 2007. It was produced by Patrick Stump, who was also credited as singing some backup vocals.
The album has been toured heavily worldwide. Cobra headlined the Really Really Ridiculously Good Looking Tour with guests Metro Station, The Cab, and We The Kings from January to March, 2008. They also played on Warped Tour 2008 and headlined the SassyBack tour, which toured from October 7 through November 30, 2008, with guests Forever the Sickest Kids, Hit the Lights, and Sing It Loud.
The album art for the ¡Viva La Cobra! album was used to promote the fourth generation Apple iPod nano in purple.

Hot Mess (2009–2010)
Following the success of Katy Perry's "I Kissed a Girl", Cobra Starship recorded their own cover version, "I Kissed a Boy", in summer 2008. The song was released on August 25, 2008, on Fall Out Boy's Citizens For Our Betterment mixtape Welcome To The New Administration. Cobra Starship is one of 9 artists who participated in thetruth.com’s Remix Project, where they remixed the Sunny Side song "Magical Amount".
Cobra Starship also began the Believers Never Die Tour Part Deux tour in the beginning of April, opening for Fall Out Boy, with other bands All Time Low, Metro Station, and Hey Monday. They spent time performing many shows in the US mostly all in April and the beginning of May, however they also played a few shows in the UK at the end of May 2009, supported by Sing It Loud, Cash Cash, and UK band Mimi Soya.
In 2009, the band went to a cabin in Pennsylvania, in an attempt to produce new material. They broadcasted live throughout their stay on the live camera feed site Stickam, thus creating the Shelf Kids. After their stay, a new album was announced with a tentative release in the summer. The band worked with Kara DioGuardi, Kevin Rudolf, KarateE! Mouse, S*A*M, Sluggo, and song-writers Benny Blanco and Patrick Stump on Hot Mess. Gossip Girl star Leighton Meester is featured on the song "Good Girls Go Bad (feat. Leighton Meester)", which is produced by Kevin Rudolf and co-written by Rudolf and Kara DioGuardi.The song is the album's first single, and was added on iTunes on May 11 and available to listen to on the band's official MySpace page. Other songs include "Pete Wentz Is the Only Reason We're Famous", which has been released on their YouTube channel and Vevo page. On May 8, the album title was confirmed as Hot Mess, with a release date of August 11. It debuted on the US Billboard 200 at number four, becoming the band's highest charting album. Guitarist Ryland Blackinton said of Hot Mess, "We just wanted to make music that was fun and kinda make people just forget about whatever shitty problem they might be having during the week."
The band began its tour to promote the new album on August 3. The tour, called Hot Mess Across The US Tour, has 21 stops and features guests such as Friday Night Boys and DJ Skeet Skeet. After The Plasticines dropped off the tour, Cobra Starship listed a number of candidate bands for the fans to vote for online in a blog; The Audition won. On their official video podcast (CobraCam.tv), the band released humorous tentative titles for the album (which parodies several other notable albums) "Griller", "Tha Ryland III", and variations of their ¡Viva La Cobra! album.
They made a stop on the Warped Tour in 2009, playing in Salt Lake City, on August 8, 2009. In Fall 2009, they were signed on to Boys Like Girls' "Love Drunk Tour" along with The Maine and A Rocket to the Moon.
Cobra Starship played at a September 11, 2009 MTV Video Music Awards weekend competition and pre-party at The Fillmore at Irving Plaza. The competition was for The MTV "VMA Best Breakout New York City Artist Award", and took place before MTV Video Music Awards performers and in between performances from MTV Video Music Awards artists.
On October 13, 2009, the band performed on Jimmy Kimmel's outdoor stage.
Cobra Starship appeared at "Los Premios MTV Latinoamérica 2009" along with Mexican star Paulina Rubio performing "Good Girls Go Bad (feat. Leighton Meester)" and "Ni Rosas Ni Juguetes". Cobra Starship and Paulina won an MTV Award for "Best Performance", for "Good Girls Go Bad (feat. Leighton Meester)" and "Ni Rosas Ni Juguetes" at the Los Premios MTV Latinoamérica 2009, voted by the public, beating other artist such as Shakira, Nelly Furtado, and Wisin y Yandel.
On February 4, 2010, Cobra Starship embarked on their first ever European tour named 'Hot Mess Across The EU-Niverse', which included the UK, Ireland, Germany, France and the Netherlands. When the tour ended on February 21, the band then travelled to Japan for a few shows, then onto Australia and New Zealand for the 'Wet Hot Australian Summer' Tour. The group also toured in Germany with I Heart Sharks and One Night Stand!.
On February 5, 2010 it was announced that Cobra Starship and 3OH!3 would be embarking on a co-headlining tour called The Too Fast For Love Tour with opening acts Travis McCoy, The Lazarus Project and I Fight Dragons. The tour ran from April 28 in Milwaukee, WI, until June 13 in Asbury Park, NJ.
In November 2010, Cobra Starship played in Argentina (November 20) and São Paulo, Brazil (November 21). The latter as a part of the Yes! Rock Fest, which also promotes a variety Brazilian bands.
Along 2010 the band collaborated with the UK singer Alexandra Burke in one of the songs of her debut album's Deluxe Edition, "Overcome". The song is called "What Happens On The Dancefloor", and keeps the vibe of their previous single "Good Girls Go Bad (feat. Leighton Meester)".

Night Shades (2010–2015)
Cobra Starship cancelled their 2011 Australian tour to finish up their fourth album, which they have been working on with Ryan Tedder and Kara DioGuardi. Gabe Saporta released a song off of the album, "Don't Blame the World, It's the DJ's Fault", on his Tumblr. A video was released of an eggplant with sunglasses and headphones getting made into eggplant Parmesan. The video is supposed to represent the album title. Gabe later announced via Twitter that the new album will be called Night Shades. The first single, " You Make Me Feel...", was released on May 10, 2011. The song features American singer/songwriter and rapper Sabi. The music video premiered on Tuesday, June 28 on MTV. The band's official Twitter and Tumblr announced that the album will be out on August 30, 2011.
Cobra Starship has recently contributed a cover of Buddy Holly's "Peggy Sue" for the Buddy Holly tribute album, Listen to Me: Buddy Holly (2011).
On September 9th 2011, Cobra Starship headlined the Fueled by Ramen 15th Anniversary show in New York's Terminal 5, with VersaEmerge, The Academy Is... and A Rocket to the Moon in support.
Night Shades was released on August 29, 2011 with the lead single "You Make Me Feel..." and also the three promotional singles. The first promotional single "#1Nite (One Night)" was released on July 26 2011, The second promotional single "Fool Like Me (Feat. Plastiscines)" was released on August 09 2011 and the third and final promotional single "Middle Finger (feat. Mac Miller)" was released on August 23, 2011.
The group released Itunes Session - EP on August 23, containing 4 acoustic songs and an alternative version of "Fold Your Hands Child".
In promotion of the album, the band performed "You Make Me Feel... (feat. Sabi)" on the MTV Video Music Awards pre-show with Sabi on August 28th 2011.