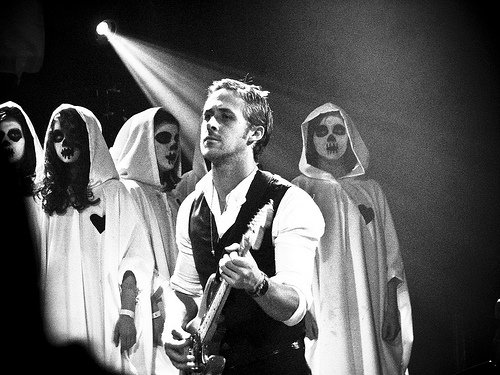 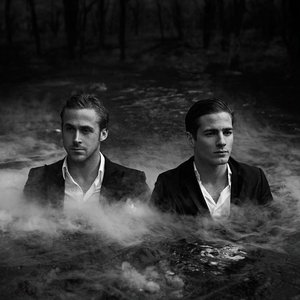 Dead Man's Bones is an American band based in Los Angeles, CA,

When Ryan Gosling and Zach Shields met in Toronto in 2005 they wanted to hate each other. The two were dating sisters and resented the forced time they were expected to spend with one another, until a conversation stumbled upon their mutual obsession with the Haunted Mansion ride at Disneyland. Shields was so preoccupied with ghosts as a kid that he was put into therapy, and Gosling's parents moved out of his childhood home because they believed it was haunted. Neither of them had really outgrown their fascination with ghosts, monsters, graveyards, zombies or anything deathly. Once they realized their shared affinity for the eerie, they started trying to write a theatrical monster ghost love story for the stage. They decided that this story should have music so they began learning how to play various instruments. By the time they had written their first few songs they realized how difficult it would be and how much money it would cost to create the show. They decided to continue with the music and put the play aside. Some of their sounds reflected the music they listened to–a little bit of doo-wop and artists such as The Shangri-Las, The Shags, The Cure, Company Flow, Sam Cooke, The Misfits, James Brown, Bobby Vinton, Joy Division, The Andrew Sisters and Daniel Johnston, to name a few.

Gosling and Shields were also individually inspired by two musical programs of the past. Ghetto Reality is a 60’s musical masterpiece conceptualized by Nancy Dupree (an inner-city school music teacher in Shields’s hometown of Rochester, New York). She made a name for herself and her students when she stepped away from a traditional curriculum to let her students make their own music about things that were relevant to them and their world. In Canada, where Ryan was raised, Hans Fenger brought together 60 untrained children in 1976 and created The Langley Schools Music Project, Innocence and Despair, that featured flawed young voices singing the tunes of The Beatles, The Beach Boys and songs by many other famous artists. It was decided early on that their newly formed band, Dead Man’s Bones, wanted to work kids into what was shaping up to be their first album, Monster Music. There was something about the earnest recordings of those kids that hit a nerve with Gosling and Shields that seemed to resonate with their own musical evolution.

They gave themselves rules for the recording process (akin to Dogme95) to make sure that their mistakes were captured and integrated into the music making process. Examples of rules ranged from trying not to do more than three takes no matter how bad the outcome, not using any steel string or electric guitars, no click tracks, playing all the instruments themselves even if they had never touched them before, etc. Of course, rules fracture here and there but the intent was to keep focus on not trying to appear more sophisticated than they were or trying to hide where they might be amateur and instead finding a way to feature their faults by framing them with their strengths.

Two years later Dead Man’s Bones finished their record with the L.A.’s Silverlake Conservatory Childrens Choir, produced by Tim Anderson (of Imarobot). Tim was fated to job from the moment Ryan heard him slip Disney’s Haunted Mansion record into a mix while spinning at a party. He became the producer of the group and of Werewolf Heart Records, the label that the trio formed to stay true to the idea of doing everything themselves. Their self-titled full length debut was released on Anti Records.