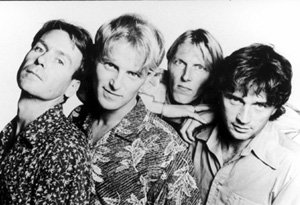 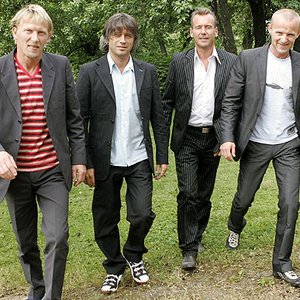 Di Derre was formed in 1992 and most of their songs are about places, people and events tied to the city of Molde, where all the members are from.

Their commercial breakthrough came in 1994 with the album "Kvinner og klær" (Women and Clothes). It was later renamed to "Jenter og sånn" (Girls and Stuff) after a legal threat by a magazine with the same name.

"Jenter og sånn" was succeded by three more albums (two studio albums and a Best of-collection) and their success culminated with the album "Gym" that came out in 1996. "Gym" is considered the best of their albums.

Their last album entitled "Slå meg på" (Turn Me On) came out in 1998. It reaped great reviews all around the country.

Since 1998, the band have kept a low profile, only playing a few concerts here and there.

Jo Nesbø is still an active musician and is still holding concerts accompanied by a bass along with his guitar. He has also written a number of acclaimed novels.

The last few years the band has only played at the Molde Jazzfestival once a year, but in summer 2006 they are touring Norway which marks the end of the band. In June 2006 a best of album was released. It also features a couple of new songs along with their greatest hits.