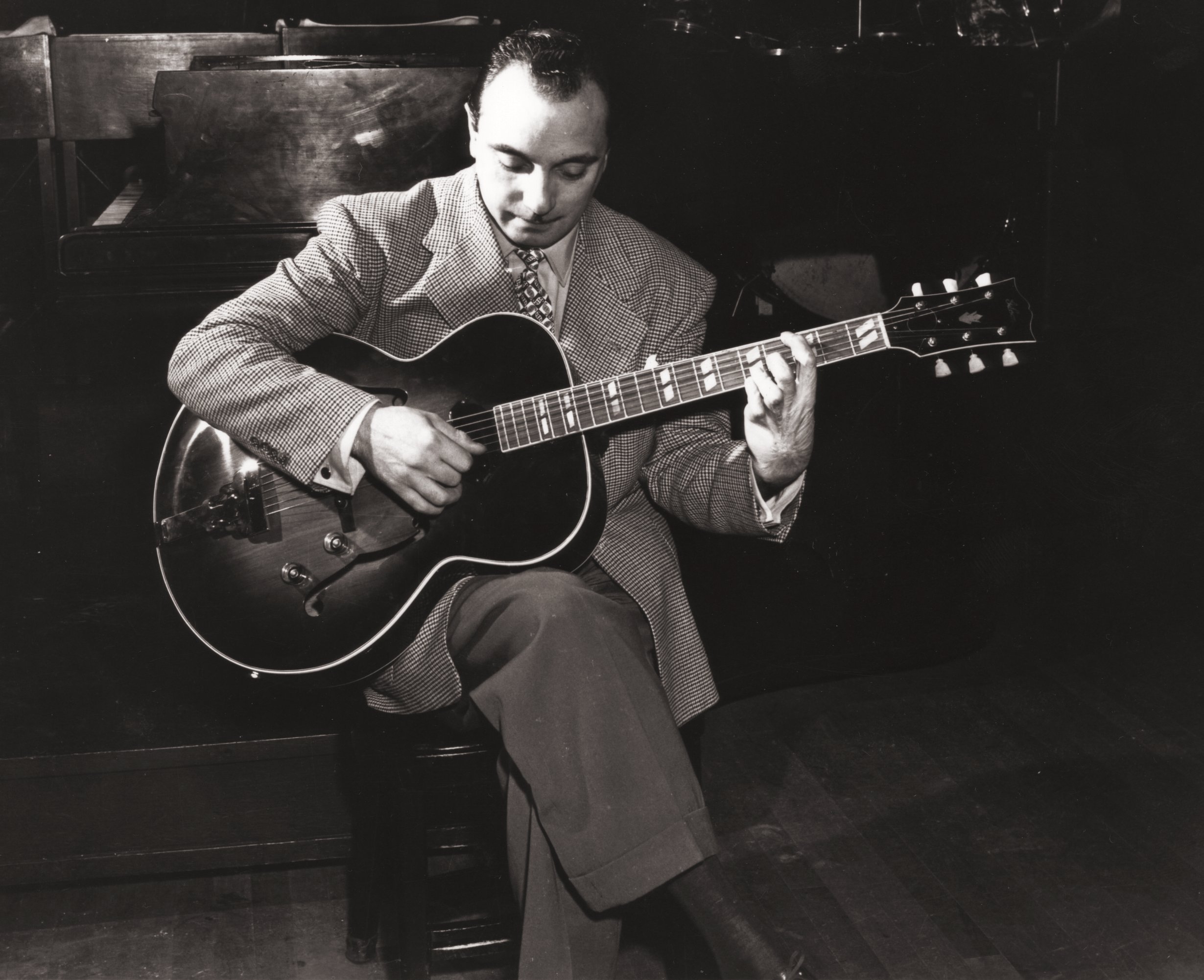 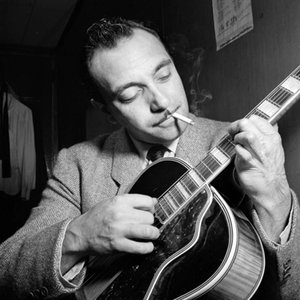 Jean "Django" Reinhardt (23 January 1910 - 16 May 1953) was a Belgian guitarist and composer credited with popularizing Gypsy jazz, as well as conceptualizing the style together with several other Gypsy musicians. Reinhardt's nickname purportedly means "I Awake" in the Romani language, however it may also simply have been a diminutive, or local Walloon version, of "Jean". He severely injured two of the digits on his left hand as a youth, and changed his guitar playing style to adapt to his handicap. Together with violinist Stéphane Grappelli, he founded the Quintette du Hot Club de France, regarded as one of the most innovative recording groups in the history of jazz music.

Born in Liberchies, Pont-à-Celles, Belgium into a family of Manouche Gypsies, Jean Reinhardt learned to play several instruments such as the banjo, violin and guitar from an early age; he spent most of his youth in Gypsy encampments close to Paris. His family made a living from crafting furniture, but included several amateur musicians who inspired Reinhardt. Eventually, Reinhardt was given a banjo-guitar, at which point he stopped playing the violin. During this period, he was inspired by two older Gypsy musicians, Gusti Mahla and Jean Castro. Able to make a living from his music from his teen years onwards playing in bal-musette halls in Paris, Reinhardt received little formal education until his adult life; he was taught the rudiments of literacy by fellow band member Stéphane Grappelli.

At the age of eighteen, Reinhardt was injured in a fire that ravaged the caravan he shared with Florine "Bella" Mayer, his first wife. They were very poor, and to supplement their income Bella made imitation flowers out of celluloid and paper; consequently, their home was full of this highly inflammable material. Returning from a performance late one night, Django apparently knocked over a candle on his way to bed. While his family and neighbors were quick to pull him to safety, he received first- and second-degree burns over half his body. His right leg was paralyzed and the third and fourth fingers of his left hand were badly burnt. Doctors believed that he would never play guitar again and intended to amputate one of his legs. Reinhardt refused to have the surgery and left the hospital after a short time; he was able to walk within a year with the aid of a cane.

His brother Joseph Reinhardt, an accomplished guitarist himself, bought Django a new guitar. With painful rehabilitation and practice, Reinhardt relearned his craft in a completely new way, even as his third and fourth fingers remained partially paralyzed. Hence, he played all of his guitar solos with only two fingers, and managed to use the two injured digits only for chord work. After regaining his ability to play, Reinhardt resumed his career playing Parisian cafes. According to one story, during his period of recovery, Reinhardt was introduced to the aesthetics of American jazz when he purchased a 78rpm disc of "Dallas Blues" by Louis Armstrong at an Orléans flea market.

In 1934, Reinhardt and Parisian violinist Stéphane Grappelli were approached by hot club chief Pierre Nourry with the idea of forming a forming a new hot club group. Thus, the Quintette du Hot Club de France was formed, with Reinhardt's brother Joseph and Roger Chaput on guitar, and Louis Vola on double bass. Occasionally, Chaput was replaced by Reinhardt's best friend and fellow Gypsy Pierre "Baro" Ferret. As the group had no true percussion section, percussion was instead provided by the group's guitarists; the Quintette du Hot Club de France thus became one of the few well-known jazz ensembles composed only of string instruments.

Jean Sablon was the first singer to record with the Quintette, resulting in more than thirty collaborations from 1933 onwards. Vocalist Freddy Taylor participated on a few songs, such as "Georgia on My Mind" and "Nagasaki". A long line of recordings for Decca, HMV and Ultraphone ensured long-lasting international success for the Quintette.

As a composer, Reinhardt wrote several influential, highly original tunes recorded by the Quintette, ranging from the dulcet ballads "Daphne", "Nuages", and "Manoir de mes rêves", to mad swingers such as "Minor Swing" and the ode to his record label of the 1930s, "Stomping at Decca". With the passing of time, many of his songs became jazz standards in their own right.

Reinhardt also experimented with recordings outside the "comfort zone" of the Quintette; in March 1933 Reinhardt recorded two takes each of "Parce que je vous aime" and "Si, j'aime Suzy", vocal numbers with lots of guitar fills and great guitar support, using three guitarists along with an accordion lead, violin, and bass. In August of the following year, recordings were also made with more than one guitar (Joseph Reinhardt, Roger Chaput, and Django), including the first recording by the Quintette. In both years, it should be noted, the great majority of recordings featured a wide variety of horns, often in multiples, piano, etc.

Throughout his career, Reinhardt played and recorded with many American jazz legends such as Benny Carter, Coleman Hawkins, Rex Stewart (who later stayed in Paris), and a led a jam-session and radio performance with Louis Armstrong. Later in his career, he performed with Dizzy Gillespie in France.

The outbreak of war in 1939 broke up the Quintette, with Grappelli remaining in London where the group was playing and Reinhardt returning to France. During the war years he led a big band, another quintet with clarinettist Hubert Rostaing in place of Grappelli, and after the liberation of Paris, recorded with such visiting American jazz artists as Mel Powell, Peanuts Hucko, and Ray McKinley. In 1946, Reinhardt took up the electric guitar and toured America as a soloist with the Duke Ellington Band, but his appearances were poorly received.

Some of his recordings on electric guitar late in his life are bop escapades where his playing sounds frantic and jagged, a world apart from the jubilant swing of old. However, starting in January 1946, Reinhardt and Grappelli held several sporadic reunions where the bop influences were more subtly integrated into the old swing format of the glory days of the Quintette. In the 1950s, Reinhardt became more reclusive, remaining in Europe, playing and recording sporadically until his death from a stroke on 16 May 1953 in Fontainebleau, France.