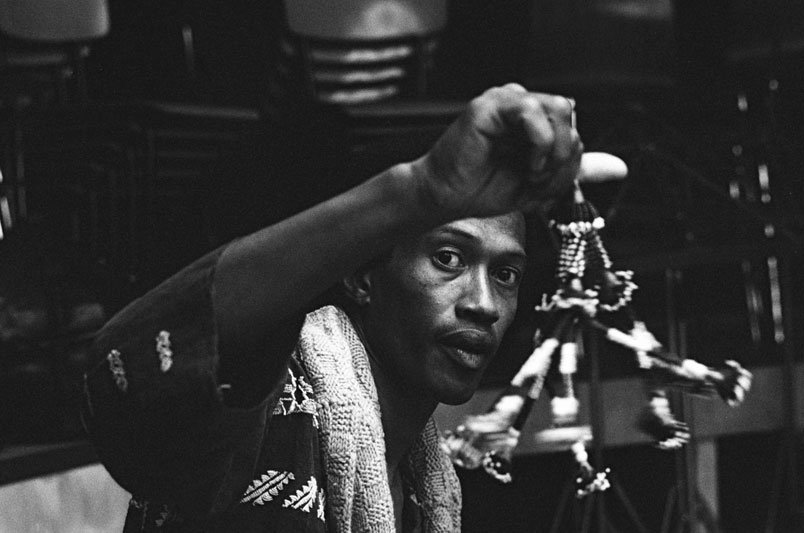 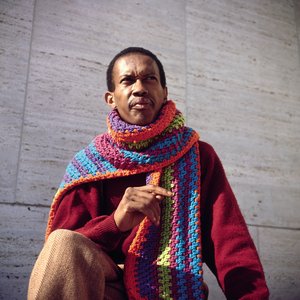 #1 Don Cherry gained notoriety in the late 1950s through legendary Ornette Coleman recordings featuring Cherry's cornet and trumpet playing (sometimes featuring his playing of novel horns); including The Shape of Jazz to Come (1959) and Free Jazz (1961), the latter of which bred an entirely new sub-genre of jazz itself. After leaving Coleman and playing with John Coltrane on The Avant-Garde (1961), he signed a deal with Blue Note records to release three albums. The first and most famous of these recordings, Complete Communion (1965), proved Cherry's worth and originality as a composer by developing several different themes within each twenty minute piece and blurring the distinction between composition and improvisation. Don Cherry added during the late 1960s and beyond various world music elements to his work. He constantly traveled and implemented different ethnic elements, including the shenai (an oboe-like instrument) until his death in Malaga, Spain in 1995.

# 2 Donald Ross Cherry (January 11, 1924 – April 4, 2018) was an American traditional pop music and big band singer and former amateur and professional golfer. In music, he is best known for his 1955 hit "Band of Gold".
Cherry was born in Wichita Falls, Texas. He started as a big band singer in the orchestras of Jan Garber and Victor Young. In 1951 he recorded his first solo hits, "Thinking of You" and "Belle, Belle, My Liberty Belle". In 1955 came his biggest hit, "Band of Gold", which reached #5 on the Billboard chart. It sold over one million copies, and was awarded a gold disc. The track peaked at #6 in the UK Singles Chart. He had three more hits in 1956 ("Wild Cherry", "Ghost Town" and "Namely You"), all backed by orchestra leader Ray Conniff. He was also the voice of the Mr. Clean commercials during the late 1950s and early 1960s.
Cherry published his biography, Cherry's Jubilee, with co-writer Neil Daniels He is a good friend of Willie Nelson and has collaborated on three albums with him, Augusta (1995), The Eyes of Texas (2002), and It's Magic (2007). Cherry was married four times, once to 1956 Miss America Sharon Ritchie, before wedding his present wife, Francine Bond Smith, in 1993. They live in Las Vegas, Nevada. His son, Stephen, was a casualty of the 9/11 attacks when American Airlines Flight 11 crashed into the North Tower. Stephen left behind four sons.

By the late 1980s, through the efforts of pop stars like Paul Simon, Peter Gabriel, and David Byrne, the musical expressions of peoples as far-flung as South Africa, Brazil, and Bulgaria had begun to meld with Western styles to create what has become known as "world music" or "world beat." But jazz trumpeter and cornet player Don Cherry had become immersed in these unusual outpourings almost two decades earlier, traversing the planet in search of ever more exotic sounds, pursuing what he has called "the fun of endless learning." In fact, the nomadic Cherry is regularly referred to as "the musical Marco Polo."

As a trumpeter and veteran of jazz's front lines, Cherry has lent his personal sound and lyricism to groundbreaking work by musicians as diverse as Ornette Coleman, Albert Ayler, Gato Barbieri, and Lou Reed. As a teacher, Cherry's students have included, according to his press biography, "Dartmouth upperclassmen, Middle Eastern goatherders, teenagers at a Swedish music camp, and grammar-school children at the Storefront School in Harlem." The trumpet innovator has studied music in Morocco, India, Eastern Europe, and Sweden. And his "acoustic expeditions" throughout the underdeveloped quarters of the Earth are renowned.

Cherry was born in Oklahoma City, Oklahoma, on November 18, 1936, the grandson of a Choctaw Indian. He moved with his parents to the Watts section of Los Angeles in 1940, when he was four years old. Back in Oklahoma, Cherry's father, a trumpet player, had overseen the Cherry Blossom Jazz Club; in Los Angeles, the elder Cherry continued to play the trumpet and became involved with the then-flourishing Central Avenue jazz scene. His son was also enchanted by music and took piano lessons before starting trumpet in junior high school.

Cherry's high school music teacher and private tutor was Samuel Brown, who also instructed saxophonists Charles Lloyd and Wardell Gray, trumpeter Art Farmer, and pianist Hampton Hawes. Cherry would skip school to absorb the wisdom of radio tastemaker Johnny Otis and to catch performances by jazz greats Charlie Parker, Billie Holiday, and Los Angeles native Dexter Gordon when they were playing nearby. At the age of 15, his truancy in full flower, Cherry began playing with an impressive jazz band led by Brown at neighboring Jefferson High School. At one point during high school, he led his own group, the Jazz Messiahs. Cherry even gigged with local professionals, including Gordon on occasion; by then he was proficient on the trumpet and piano and could compose as well.

As his high-school career progressed, Cherry's musical instincts began to develop and became more eclectic; he loved bebop, the early rock and roll of the Platters, and the Afro-Cuban sounds brought back to Los Angeles from south of the border by the merchant marine. It was during this seminal time in Cherry's development that he was introduced to saxophonist Ornette Coleman.

Cherry had just returned from a tour of the West Coast and Canada with Texas saxophonist James Clay. At the age of 17, he met Coleman, with whom he would have a long and fruitful association, in a Watts record store. Coleman had been generating quite a bit of controversy with his decidedly different approach to jazz improvisation. Cherry's preferred instrument at the time was a high-pitched pocket cornet. The young player's inclusive, experimental approach to his craft enabled him to enthusiastically embrace the style becoming known as free-form jazz.

In 1959 he spent a summer with Coleman at the School of Jazz in Lenox, Massachusetts; later Coleman's quartet, with Cherry on board, began its legendary engagement at New York City's Five Spot Cafe, which brought international attention and interest to the band. Releasing improvisation from the established chordal specifications of bebop, the quartet would ultimately exert a profound influence on the contemporary music that followed. In those early years of the "free-jazz" movement, Cherry's strong, wiry tone and rhythmically elastic phrasing rendered him an apt foil for Coleman. He developed an assortment of vocalized sounds, producing expressive squeals and split notes on both cornet and pocket trumpet.

After appearing on Coleman's first seven records, Cherry left the visionary saxman's group in 1961. He spent the following eight months playing with saxophonist Sonny Rollins. Over the next few years, Cherry worked with John Coltrane, Steve Lacy, and George Russell. He also co-founded a group called the New York Contemporary Five with saxophonists Archie Shepp and John Tchicai. In 1963, Cherry toured Europe with Albert Ayler and Shepp and met Argentine tenor saxophonist Gato Barbieri. Soon he was recording with Barbieri.

The full emergence of Cherry from Ornette Coleman's shadow was evidenced in 1965 on his collabortion with Barbieri on Blue Note Records' Complete Communion. Cherry's compositions are continuous, multithematic pieces reflecting a versatile, assertive, and creative improviser. From 1964 to 1966, Cherry co-led a European band with Barbieri.

In the late 1960s, Cherry began to explore the music of the Middle East, Asia, Africa, and Indonesia. On 1968's Eternal Rhythm, Cherry played native wind and percussion instruments to create novel sounds. His direction was a marked departure from the free-jazz of that era.

After teaching at New Hampshire's Dartmouth College in 1970, Cherry and his family–he is the father of rap-soul artist Neneh Cherry and an actor-drummer son named Eagle-Eye–lived in Sweden until 1975, residing in an art school he had purchased there. After leaving Scandinavia, the family explored Europe, Africa, and the Middle East, traveling by camper. All the while Cherry gave casual concerts and jammed with the locals. "I didn't have any jobs lined up when I went," he revealed in his press biography, "I just went, and that's the way to do it if you're going to meet all the musicians and learn melodies and rhythms–if you're going to see all there is to see."

In the late 1970s, Cherry reunited with three former Coleman sidemen–Dewey Redman, Ed Blackwell, and Charlie Haden–to form the Old and New Dreams Band. The quartet labored to preserve and perpetuate the musical vision of their august former leader. Cherry formed an ensemble called Codona in 1978 with multi-instrumentalists Collin Walcott and Nana Vasconcelos. Codona specialized in a kaleidoscope of ethnic musics. Cherry sang and played piano, organ, melodica, wooden flutes, and a Malian hunter's guitar called the doussn'gouni. He continued to canvass the vast horizon of global music throughout the 1980s. His interests led him to compose extraordinary pieces, many of a solemn and ritualistic complexion.

In 1989, in Hamburg, West Germany, Cherry participated in the premiere production of avant-garde theater impresario Robert Wilson's jazz opera Cosmopolitan Greetings. Also that year, Rolling Stone named Cherry's Art Deco record of the year. In 1991, the artist received two San Francisco Bay Area Music Awards for his album MultiKulti, its title a play on the word multicultural. By then Cherry had become a Bay Area resident. According to his press bio, Cherry was also honored when New York City's jazz station WKCR-FM aired his work for an entire week, broadcasting over 100 hours of recordings, interviews, and commentary dating from 1959.

In 1990, Cherry hit the road with another quartet, also called MultiKulti, bringing his unique "gumbo" to, and undoubtedly borrowing from, locales from Spain to Japan. He was also performing then with his Hieroglyphics Ensemble big band, which had lent a hand to the MultiKulti sessions. "It's a great time in music right now," Cherry told Detroit Free Press contributor W. Kim Heron at the time, "whether they call it global music, world music, world beat, whatever. I just call it multikulti." Of the trumpet player's universal oeuvre Heron wrote, "Cherry's albums have been like so many postcards mailed home from an incredible musical journey."