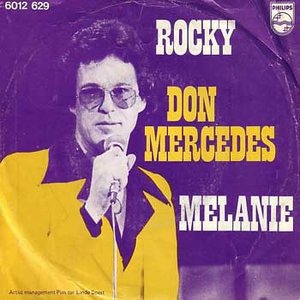 Don Mercedes, born as Rob van Bommel, (12 January 1941) is a Dutch singer who scored a big hit in 1976 in Holland and Belgium with the song 'Rocky'. He began his career in the 60's with bands as The Improvers and His Benz. At the start of his career he recorded and sang in English in that fase he recorded a cover version of Elvis Presley's 'Devil in Disguise' but later on he scored a little hit with a Dutch translation of the protest song 'Universal Soldier' entitled 'Zomaar een Soldaat'. In spite of his attempts to make it in Holland it would take 10 years before he would enter the Dutch hitparade again. 'Rocky' made it in 1976, it went to become his greatest hit and reached the #12 in the Dutch Top 40, 2 weeks later it reached the exact same position in the Belgian BRT Top 30, in both country's it became a bigger hit than the original recording from famous Frank Farian. After 'Rocky' he tried a few times to score another hit but didn't succeed, one his attempts was bassed on a cliffhanger from the then extremely popular tv series Dallas, the song 'Wie Schoot op J.R. Ewing' didn't make it to the Top 40.

In the 70's Mercedes was the owner of a discotheek in Utrecht.