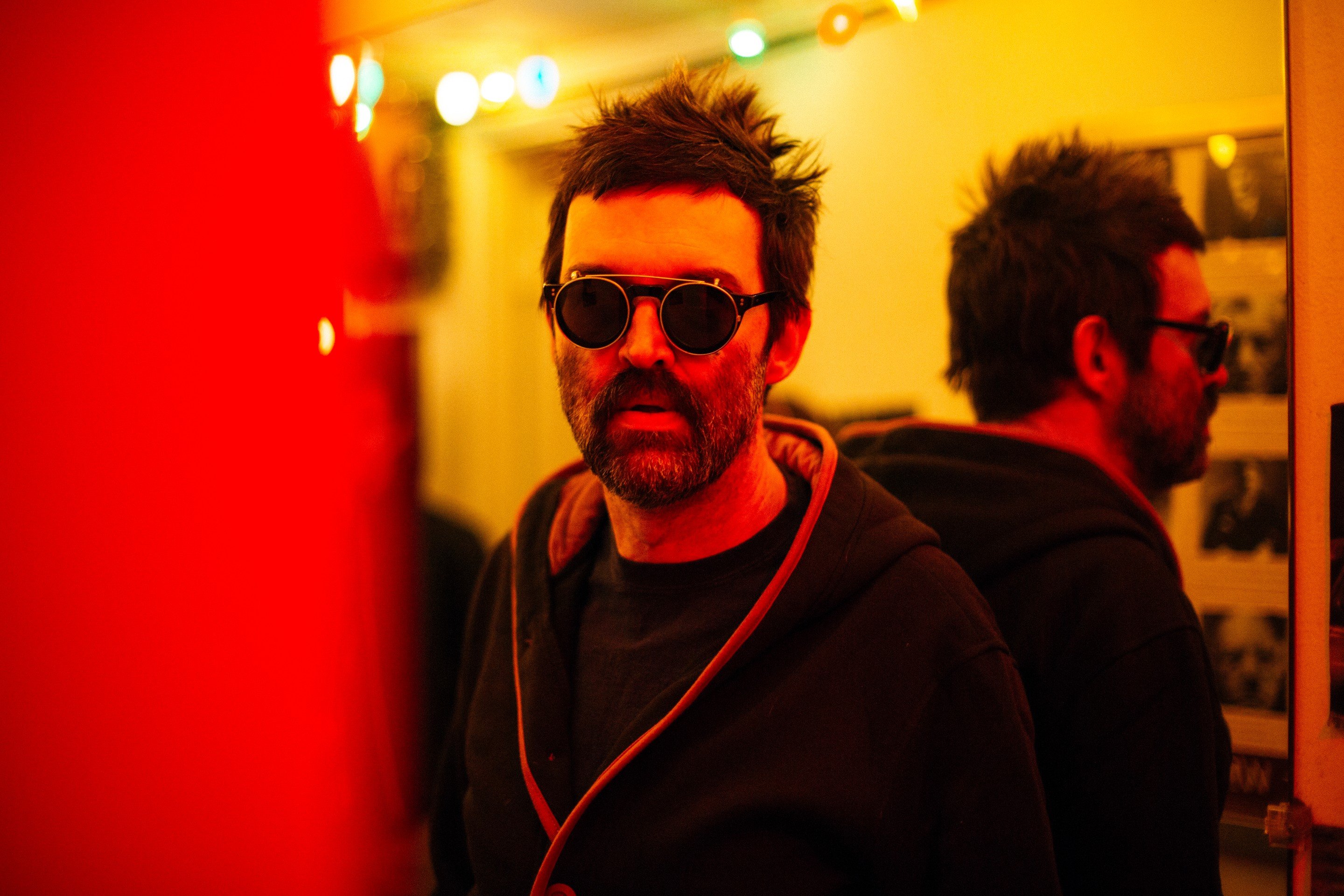 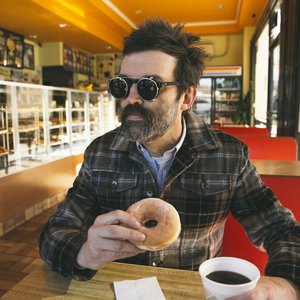 Eels is an American alternative/acoustic indie rock band formed by singer/songwriter Mark Oliver Everett, better known as "Mr. E" or simply E. Other members rotate frequently, both in the studio and on stage. Eels were officially founded in 1995 when Jonathan 'Butch' Norton and E met Tommy Walter. The name "Eels" was chosen so that the band's records would be close to E's solo records in an alphabetical ordering. In 1996 the band released their debut album Beautiful Freak. Later albums include Hombre Lobo (2009), End Times (2010), Tomorrow Morning (2010).

Central band member E (born in 1963) grew up experimenting with music in the Washington D.C. suburbs and later moved to Los Angeles, California, United States emerging as the frontman of a band, calling Eels a vessel for his music. Though other members rotate frequently, both in the studio and on stage, their live shows include interesting interpretations of older songs, and usually some well-known covers.

E solo records
An album entitled Bad Dude in Love was released in 1985 under the name Mark Everett. Not much is known about the album; all information found is located at eels.nl. In 1992, Everett released his first solo album under the name E titled A Man Called E on Polydor. The single "Hello Cruel World" was a minor success. Touring to support this album, he opened for Tori Amos. A Man Called E was followed by Broken Toy Shop in 1993; that year he was joined on stage by drummer Jonathan 'Butch' Norton. After Broken Toy Shop E was released from his record deal with Polydor.

Beautiful Freak
When Butch and E met Tommy Walter, they founded Eels. The main reason for this name was so that the band's records would be next to E's in an alphabetical ordering. It was only later that they realized that The Eagles and Earth, Wind and Fire would fall in between. They signed a record deal with Steven Spielberg's Dreamworks, being one of their first bands. In 1996 the band released their debut album Beautiful Freak: a melancholic pop record, where the lyrics of a tormented Everett shine. With the singles "Novocaine for the Soul" and "Susan's House" the band had modest international success. They toured extensively to support the album in 1996 and 1997, playing many festivals and building their name as a live act in the United States and Europe. In September 1997, Tommy quit the band (or was fired, depending on who you ask - see the hidden message in the track "Dog's Life"). The album demonstrated a wide range of influences, including grunge and hip-hop.

Electro-Shock Blues
E had a difficult time in his personal life at this point. His father was found dead, his sister had committed suicide just before Beautiful Freak was released, and his mother was diagnosed with cancer. These events inspired him to write Electro-Shock Blues, released in 1998. The lyrics deal with subjects like suicide, death, and cancer. Despite the fact that it is a very dark album, and not nearly as big a commercial success as its predecessor, Electro-Shock Blues is still many fans' favorite. Contributions to the album were made by Jon Brion, Dust Brother Michael Simpson, and T-Bone Burnett. "Last Stop: This Town" was a minor success as a single; the second single "Cancer for the Cure" was used on the soundtrack for the film American Beauty. Still a three-piece band on stage, Tommy Walter was replaced by Adam Siegel, formerly of Suicidal Tendencies. A large part of the American leg of the tour was canceled after the death of E's mother. They returned to Europe later in the year, to open for Pulp. After the tour Adam left the band to focus on his own project, My Head.

Daisies of the Galaxy
In 2000, the Daisies of the Galaxy album was released, a much happier work. As E puts it, If Electro-Shock Blues was the phone call in the middle of the night that the world doesn't want to answer, then Daisies of the Galaxy is the hotel wake-up call that says your lovely breakfast is ready. The album was almost entirely recorded in E's basement. E is joined in the studio by Michael Simpson (Dust Brothers), Grant Lee Phillips (Grant Lee Buffalo), and Peter Buck (R.E.M.). On the tracks "It's a Motherfucker" and "Selective Memory", E plays on the same piano Neil Young used on his classic album After the Goldrush. The first single "Mr. E's Beautiful Blues" was co-written by Simpson and features the sound of his pager in the intro. The song was not intended to be on the album, but the record company insisted on its inclusion. Therefore it is not featured on the track listing but listed as 'bonus track', separated from the rest of the album by 20 seconds of silence. The song also appeared on the Road Trip soundtrack; some prominent members of the cast from that film feature in the music video. Because of the use of swear words on "It's a Motherfucker" and "Mr. E's Beautiful Blues" (goddamn right, it's a beautiful day) a censored version was released. "It's a Motherfucker" was renamed to "It's a Monstertrucker"; instances of the 'f-word' were removed by E singing over them in a distorted voice. To promote Daisies of the Galaxy another tour was planned across the United States and Europe. This time Eels were transformed into an 6-piece orchestra, including Lisa Germano. E also played a few solo shows, opening for Fiona Apple.

Oh What A Beautiful Morning
In 2000 Eels released an internet only, collection of live tracks a collation of the orchestra tour and the solo shows E played with Fiona Apple.

Souljacker
In 2001 Souljacker was released, an album with a darker feel than Daisies of the Galaxy. John Parish, previously in PJ Harvey's band, co-wrote most of the songs and also played guitar on the album and first part of the tour. Koool G Murder played bass and keyboards and joined Eels on tour, jokingly introduced by E as 'the other guy'. Wim Wenders directed the video for the first single, "Souljacker Part 1". After Parish became a father, he was replaced with Joe Gore for the American leg of the Bus Driving, Band Rocking Tour.

Electro-Shock Blues Show
Electro-Shock Blues Show is a live album by Eels, released in 2002. The fifteen tracks on this album were recorded at six different venues. According to the album's liner notes, the first ten tracks were recorded "somewhere in England" during December 1998 while the Eels were a support act for the band Pulp. The other five tracks are brought in from selected performances from around Europe and the United States. The band at the time consisted of E, Butch, and Adam Siegel. The tenth and final track from the English performance features an audience member known simply as 'Emma' playing the sleigh bells. The last track features a hidden bonus song, another version of "My Beloved Monster", which follows a long silence after the end of "Climbing To The Moon".

Shootenanny!
2003 marked the release of the album Shootenanny!. E now refers to the album as a break from recording the following Blinking Lights album. It was recorded live in the studio in only ten days. "Saturday Morning" was released as a single. Butch left the band after recording the album to join Tracy Chapman (see ). He was replaced with Puddin. In 2003 Eels did another big tour, The Tour of Duty. The live band then consisted of E, Shon 'Golden Boy' Sullivan (guitar), Koool G Murder (bass) and Puddin (drums). Golden Boy left to work on his own project Goldenboy and was replaced with Chet Lyster (also known as Chet Atkins III or 'The Chet'). This year, E also composed the score for the film Levity.

Blinking Lights and Other Revelations
The new album, called Blinking Lights and Other Revelations, was released on April 26, 2005. This is the band's first release for new label Vagrant Records – an epic 33-track double album. Contributions were made by Tom Waits, Peter Buck and John Sebastian (The Lovin' Spoonful). A hand-written lyric-sheet to "In the Yard, Behind the Church", a song from the new album, was sold on eBay for charity. The winning bidder paid $544 for it. The first tour in support of this album, billed as Eels With Strings, featured primarily acoustic guitar-, organ- and piano-based performances by E backed by Alan 'Big Al' Hunter on piano and upright bass; Chet Lyster on guitar, mandolin, pedal steel, musical saw and drums; and the string quartet of violinists Paloma Udovic and Julie Carpenter, violist Heather Lockie and cellist Ana Lenchantin. The tour resulted in a live album, Eels with Strings: Live at Town Hall, recorded in New York City, due to be released on CD and DVD on February 21, 2006.

Meet the Eels: Essential Eels Vol. I and Useless Trinkets
In early 2008 Eels released their first "greatest hits" compilation as well as a compilation of b-sides, rarities, soundtrack singles and unreleased tracks.

Meet the Eels: Essential Eels Vol. I spans the first decade of the Eels with singles from all their albums. Attached is a DVD featuring music videos and one live performance video. Useless Trinkets contains 50 tracks and a DVD of their Lollapalooza 2006 performances.

To promote those releases the band is currently on world tour ("An evening with Eels"). This time only The Chet joined E on stage, both playing a broad cross-section from the Eels repertoire on a variety of instruments. The concerts also featured The Chet reading excerpts from E's autobiography. On this tour, one could purchase a live CD/DVD package of Eels' live performance at the London Astoria in 2006 ("EELS Live and in Person!").

Bobby, Jr.
Everett's dog, Bobby Jr., has been on the rise lately, too. A mix between a German Shepherd and a Basset Hound, Bobby Jr. was a homeless dog, roaming the streets of Silver Lake, Los Angeles, California until the Los Angeles Animal Control caught him, and he was taken to a dog pound, where Everett eventually "adopted" him. Recently, Bobby Jr. lent his vocals to the Eels song "Last Time We Spoke" on the album Blinking Lights and Other Revelations] (2005). Bobby Jr. can also be seen on assorted Eels merchandise, the official Eels website, and he even has his own MySpace!