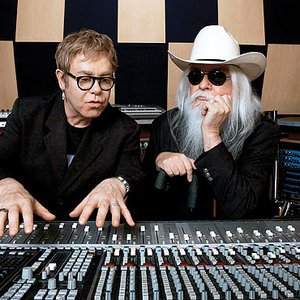 Sir. Elton John, (born Reginald Kenneth Dwight; 25 March 1947) is an English singer-songwriter, composer and pianist.
Claude Russell Bridges (born April 2, 1942; Lawton, Oklahoma), known professionally as Leon Russell, is an American singer-songwriter, pianist, and guitarist. According to the If It Wasn't For Bad Songfacts, the pair first met in 1970 when Russell attended John's first ever US show at the famous Troubadour in Los Angeles. The meeting heralded the beginning of a long friendship between the two artists and the pair went on to tour together shortly thereafter at New York's Fillmore East. "In the late '60s and early '70s, the one piano player and vocalist who influenced me more than anybody else was Leon Russell," Elton said. "He was my idol."
After years of being out of touch, John listened to Russell's music while on safari in Africa during the summer of 2009 and was inspired to reconnect with his friend.
In 2010 they both went to studio and recorded an album together and named it "The Union". the first single from the album is "If It Wasn't For Bad".
Leon Russell said he marks a new chapter in his recording career and also continued: "I don't have to make pop records any more!"