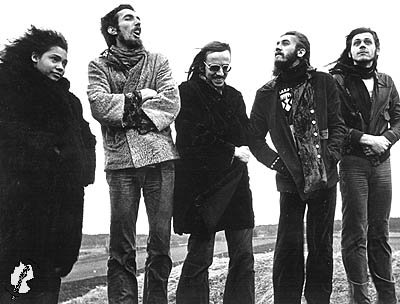 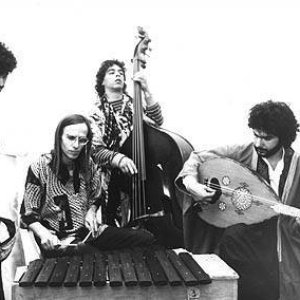 1) Embryo is a musical collective from Munich which has been active since 1969, although its story started in the mid-1950s in Hof where Christian Burchard and Dieter Serfas met for the first time at the age of 10.
One of the most original and innovative Krautrock bands, Embryo fused traditional ethnic music with their own jazzy space rock style. Over their 50-year existence, the group has traveled the world, playing with hundreds of different musicians and releasing over 50 records.

Embryo was formed in 1969 in Munich, Germany, by Christian Burchard (1946 - 2018) (drums, vibraphone, marimba), Edgar Hofmann (saxophone, violin), Lothar Meid (bass), Jimmy Jackson (organ), Dieter Serfas (drums, percussion), Wolfgang Paap (drums), Ingo Schmidt (saxophone), and John Kelly (guitar). However, the lineup was already different by the time of the sessions for their debut album. The resulting record was called Opal (1970). By the time of Embryo's Rache (1971), the group was already adding ethnic touches to their music.

In 1972, the same year they played at the Olympic Games in Munich, Embryo was invited by the Goethe Institute to tour Northern Africa and Portugal. In Morocco, the band was fascinated by the different tonal scales used by Moroccan musicians, profoundly shaping the group's music to come. In 1973, the band was joined by saxophonist Charlie Mariano and guitarist Roman Bunka, who were both influential to the Embryo sound. After Surfin' (1974) and Bad Heads and Bad Cats (1975) the band did an eight-month excursion to India, where they met local musicians. Embryo also set up their own record label, Schneeball, with other german bands during this time. The double album Embryo Reise (1979) captured this musical expedition as did the documentary film Vagabunden-Karawane.

After touring Asia, the Middle East, and Egypt during the early '80s, Embryo released Zack Glück, in 1984. The band then toured Africa and played together with Nigeria's Yoruba Dun Dun Ensemble.

The Band is still playing with new and old musicians from all over the world to this day, now led by Christian Burchard's daughter Marja, after he died in 2018.

2) A melodic death band from Cremona, Italy, who has two full-length albums, "Chaotic Age" and "No God Slave."

3) A death metal band from Sweden that released one demo called "Damnatory Cacophony."

8) Embryo is the sound of madness generated by the surrounding reality.
The story of the band started in Ostia, the seaside of Rome, in 2008. Since their meeting in 2006, Andrea Dimitri (Vocalist, Drummer) and Milo Silvestro (Drummer, Percussionist) have shared several music projects such as "Alias", a hip-hop/elecrtonic duo in which both guys were creating beats and putting together a lot of different influences. In particular, Milo was programmer and turntablist (studio and live) and Andrea was the singer/rapper.
But the two realized very soon that they needed something else to express their feelings and their artistic vein. Something heavy, angry, groovy and deep in which they could give their best.
This led to the creation of Embryo.
http://www.reverbnation.com/embryoroma

9) Embryo is the alias for the electronic musician Simon Moorcroft. Based in Adelaide, Australia, Embryo constructs Electronic music using Synthesizers.

He claims that his influences include Coldplay, Daft Punk, The Chemical Brothers, Regurgitator, Midnight Juggernauts, The Presets, Pendulum and Pogo.

You can further connect with Embryo via his Facebook page:
http://www.facebook.com/pages/Embryo/132414436776480
Stream, rate, review and download his tracks for free in MP3 format via his Triple J Unearthed page:
www.triplejunearthed.com/Embryo
And subscribe to him via his Youtube channel:
http://www.youtube.com/user/5048Simon
For business enquiries, contact Embryo via simon_moorcroft@iprimus.com.au

10) Embryo is a metal project that was initiated by the two former Seven Field members Anders Westengen and Robin Strand. In 2014 they sat down in a primitive home studio to record ideas that had flourished for several years after the dissolution of the previous band. And with Norwegian forests and mountains right outside the cabin windows where the studio is stationed was the dark musical moods defined. In recent times also Oskar Holldorff become part of the band with their catchy synth-parties who tops the music with the atmosphere. After a year of creative weekends at the cabin to Robin, is now the EP "A Fervent Sense" result and is available to music services around the world.
* https://player.spotify.com/artist/1GfM1GbSjbDYOy0AmCew9s
* https://soundcloud.com/embryonorway
* http://urort.p3.no/#!/band/embryomusic