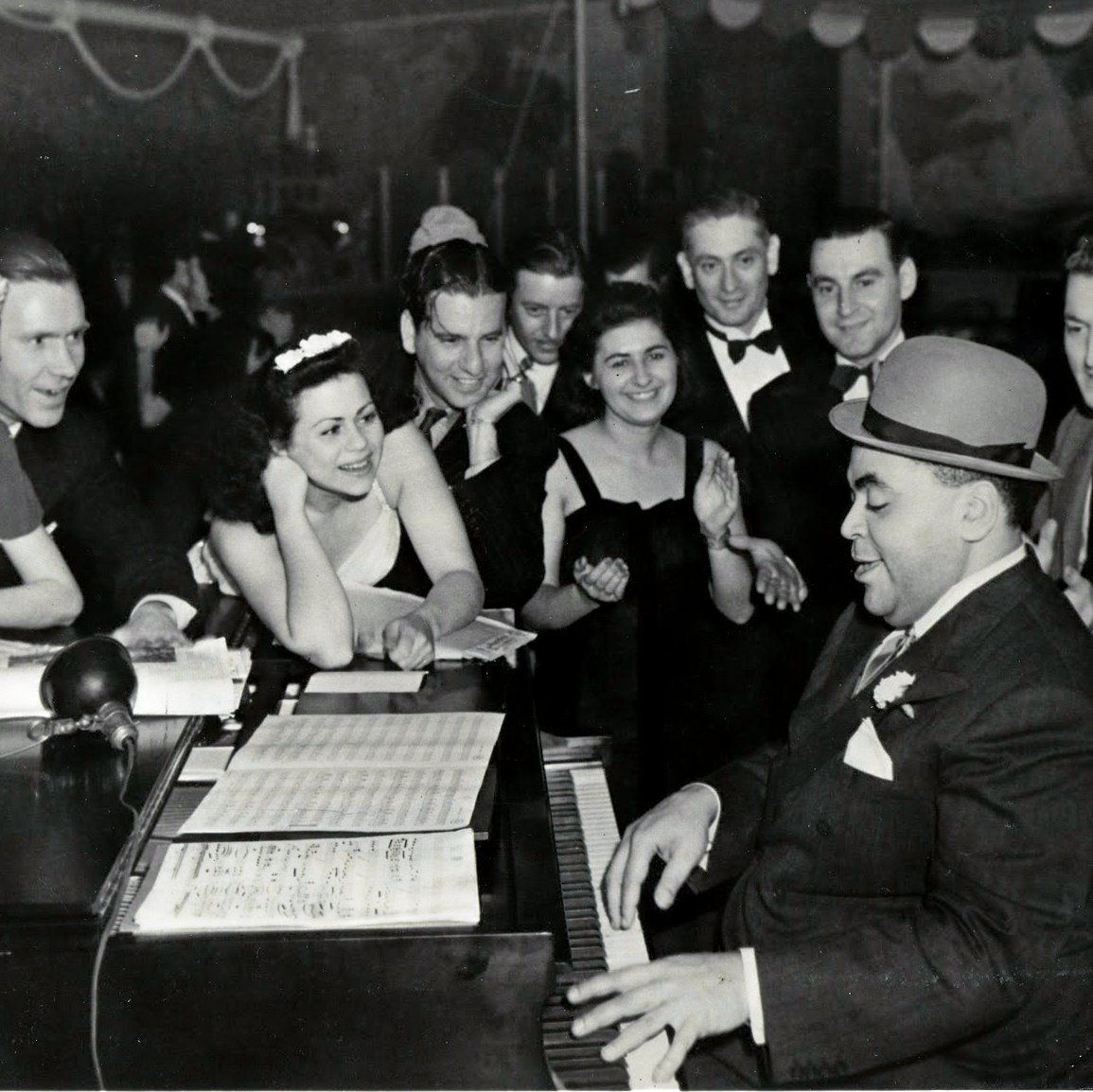 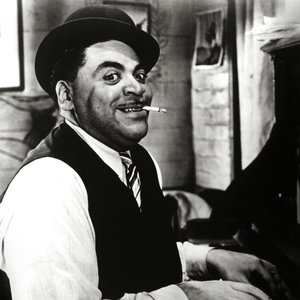 Thomas Wright Waller was the youngest of four children, born in New York to Adeline Locket Waller and Reverend Edward Martin Waller. He started playing the piano when he was six and graduated to the organ of his father's church four years later. At the age of fourteen he was playing the organ at Harlem's Lincoln Theater and within twelve months he had composed his first rag. Waller's first piano solos ("Muscle Shoals Blues" and "Birmingham Blues") were recorded in October 1922 when he was 18 years old.
He was the prize pupil, and later friend and colleague, of stride pianist James P. Johnson. Fats Waller was the son of a preacher and learned to play the organ in church with his mother. Overcoming opposition from his clergyman father, Waller became a professional pianist at 15, working in cabarets and theaters. In 1918 he won a talent contest playing Johnson's "Carolina Shout", a song he learned from watching a player piano play it.

Waller was one of the most popular performers of his era, finding critical and commercial success in his homeland and in Europe. He was also a prolific songwriter and many songs he wrote or co-wrote are still popular, such as "Honeysuckle Rose", "Ain't Misbehavin'" and "Squeeze Me". Fellow pianist and composer Oscar Levant dubbed Waller "the black Horowitz". Waller composed many novelty tunes in the 1920s and 1930s and sold them for relatively small sums. When the compositions became hits, other songwriters claimed them as their own. Many standards are alternatively and sometimes controversially attributed to Waller. Waller's son Maurice wrote in his 1977 biography of his father, that once he was playing "I Can't Give You Anything but Love, Baby" when he heard his father complaining from upstairs and came down and admonished him never to play that song in his hearing, saying that he had to sell that song when he needed some money. He even made a recording of it in 1938 with Adelaide Hall who, coincidentally, had introduced the song to the world (at Les Ambassadeurs Club in New York in 1928), in which he played the tune but made fun of the lyrics. Likewise, Maurice noted his father's objections whenever he heard "On the Sunny Side of the Street" played on the radio.
The anonymous sleeve notes on the 1960 RCA (UK) album Handful of Keys state that Waller copyrighted over 400 new songs, many of which co-written with his closest collaborator Andy Razaf. Razaf described his partner as "the soul of melody… a man who made the piano sing… both big in body and in mind… known for his generosity… a bubbling bundle of joy". Gene Sedric, a clarinetist who played with Waller on some of his 1930s recordings, is quoted in these same sleeve notes recalling Waller's recording technique with considerable admiration: "Fats was the most relaxed man I ever saw in a studio, and so he made everybody else relaxed. After a balance had been taken, we'd just need one take to make a side, unless it was a kind of difficult number."

Waller played with many performers, from Nat Shilkret (on Victor 21298-A) and Gene Austin to Erskine Tate to Adelaide Hall, but his greatest success came with his own five- or six-piece combo, "Fats Waller and his Rhythm".

His playing once put him at risk of injury. Waller was kidnapped in Chicago leaving a performance in 1926. Four men bundled him into a car and took him to the Hawthorne Inn, owned by Al Capone. Waller was ordered inside the building, and found a party in full swing. Gun to his back, he was pushed towards a piano, and told to play. A terrified Waller realized he was the "surprise guest" at Capone's birthday party, and took comfort that the gangsters did not intend to kill him. According to rumor, Waller played for three days. When he left the Hawthorne Inn, he was very drunk, extremely tired, and had earned thousands of dollars in cash from Capone and other party-goers as tips.

In 1926, Waller began his recording association with Victor Records, his principal record company for the rest of his life, with the organ solos "St. Louis Blues" and his own composition, "Lenox Avenue Blues". Although he recorded with various groups, including Morris's Hot Babes (1927), Fats Waller's Buddies (1929) (one of the earliest interracial groups to record), and McKinney's Cotton Pickers (1929), his most important contribution to the Harlem stride piano tradition was a series of solo recordings of his own compositions: "Handful of Keys", "Smashing Thirds", "Numb Fumblin'", and "Valentine Stomp" (1929). After sessions with Ted Lewis (1931), Jack Teagarden (1931), and Billy Banks's Rhythmakers (1932), he began in May 1934 the voluminous series of recordings with a small band known as Fats Waller and his Rhythm. This six-piece group usually included Herman Autrey (sometimes replaced by Bill Coleman or John "Bugs" Hamilton), Gene Sedric or Rudy Powell, and Al Casey.
Waller wrote "Squeeze Me" (1919), "Keepin' Out of Mischief Now", "Ain't Misbehavin'" (1929), "Blue Turning Grey Over You", "I've Got a Feeling I'm Falling" (1929), "Honeysuckle Rose" (1929), and "Jitterbug Waltz" (1942). He collaborated with the Tin Pan Alley lyricist Andy Razaf. He composed stride piano display pieces such as "Handful of Keys", "Valentine Stomp" and "Viper's Drag".
He enjoyed success touring the United Kingdom and Ireland in the 1930s. He appeared in one of the first BBC broadcasts. While in Britain, Waller also recorded a number of songs for EMI on their Compton Theatre organ located in their Abbey Road Studios in St John's Wood. He appeared in several feature films and short subject films, most notably "Stormy Weather" in 1943, which was released July 21, just months before his death. For the hit Broadway show, "Hot Chocolates", he and Razaf wrote "(What Did I Do to Be So) Black and Blue" (1929), which became a hit for Ethel Waters and Louis Armstrong.
Waller performed Bach organ pieces for small groups on occasion. Waller influenced many pre-bop jazz pianists; Count Basie and Erroll Garner have both reanimated his hit songs (notably, "Ain't Misbehavin'"). In addition to his playing, Waller was known for his many quips during his performances.
Between 1926 and the end of 1927, Waller recorded a series of pipe organ solo records. These represent the first time syncopated jazz compositions were performed on a full sized church organ.

Waller contracted pneumonia and died on a cross country train trip near Kansas City, Missouri on December 15, 1943, after making a final recording session with an interracial group in Detroit that included white trumpeter Don Hirleman. He was on his way back to Hollywood for more film work, after the smash success of "Stormy Weather". Coincidentally, as the train with the body of Waller stopped in Kansas City, so stopped a train with his dear friend Louis Armstrong on board.

Recordings of Fats Waller were inducted into the Grammy Hall of Fame which is a special Grammy award established in 1973 to honour recordings that are at least 25 years old and that have "qualitative or historical significance".

Subject of the Irish poet Michael Longley's "Elegy for Fats Waller".
Waller's organ music is prominently featured in the David Lynch film Eraserhead.
He was caricatured in several Warner Brothers animated shorts, most notably Tin Pan Alley Cats.
In the 2008 film, Be Kind Rewind Fats Waller was a major theme and influence for the storyline.
Italian comics book artist Igort published a comic book about Waller entitled Fats Waller on Coconino Press in 2009.
Some of Waller's music ("Jitterbug Waltz") is used in the video game series BioShock.
Waller's version of "Louisiana Fairytale" was used for many years as the theme song to This Old House.

A Broadway musical revue showcasing Waller tunes entitled Ain't Misbehavin' was produced in 1978. (The show and a star of the show, Nell Carter, won Tony Awards.) The show opened at the Longacre Theatre and ran for over 1600 performances. It was revived on Broadway in 1988. Performed by five African American actors, it included such songs as "Honeysuckle Rose", "This Joint Is Jumpin'", and "Ain't Misbehavin'".