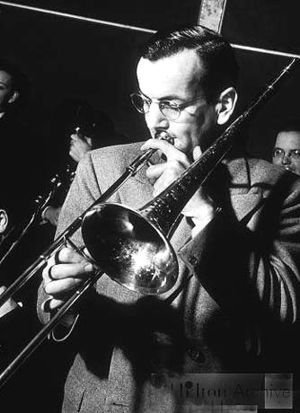 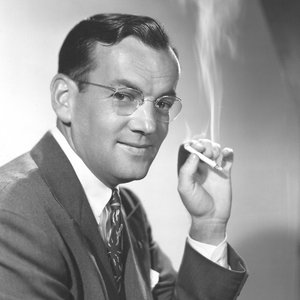 Alton Glenn Miller was born in Clarinda, Iowa on March 1, 1904. He started his musical career when his father brought home a mandolin. As soon as possible, he traded the instrument for an old horn, which he practiced diligently.

During the late 1920s and early 1930s, Miller managed to earn a living working as a freelance trombonist in several bands. His first band was formed in 1937 but failed to distinguish itself and eventually broke up.

Following the break-up of his first band, Miller realized that he needed to develop a unique sound, and decided to make the clarinet play a melodic line with a tenor saxophone on the same note, while three other saxophones harmonized. With this sound combination, the Miller band that became the most popular was born in 1938. After a shaky start, it made his new band a nationwide hit.

On December 15, 1944, Miller was to fly from the United Kingdom to Paris, France, to play for the soldiers who had recently liberated Paris. His plane departed from RAF Twinwood Farm in Clapham, Bedfordshire and disappeared while flying over the English Channel. No trace of the aircrew, passengers or plane has ever been found. Miller's status is missing in action.

His music is still iconic of the time period in which he lived and continues to draw thousands of fans of all age groups.

Glenn Miller was a popular visitor to Bedford and its American Air force bases. He is still remembered to this day by the people of Bedford with a bronze bust displayed on the front of the towns Corn Exchange, and more recently, what remains of the Twinwoods Airfield being renovated as a Glenn Miller Museum and outdoor event site

2) Glenn Miller was a Jamaican reggae and soul artist of the 1960's.

Along with other legendary artists such as Bob Marley & the Wailers and Desmond Dekker he recorded for the Trojan record label.