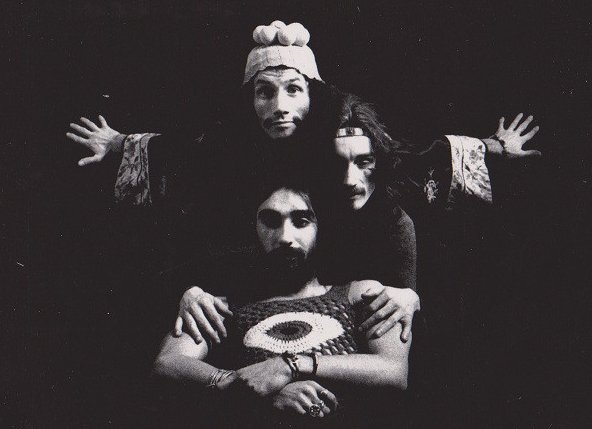 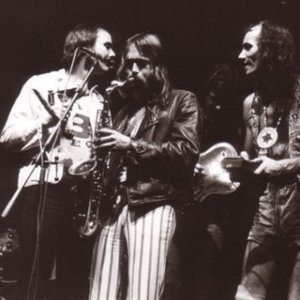 Guru Guru is one of the most notable German Krautrock bands, existing from the late 1960s to the present. The band has had many incarnations over nearly 4 decades. Drummer Mani Neumeier has remained as the only original member.

Mani and bassist Uli Trepte came from playing free jazz in the mid 1960's with pianist Irene Schweizer and the appear on an obscure out of print album under her name shortly before forming Guru Guru in the late 1960's. The were joined by ex-Agitation Free guitarist Ax Geinrich as a "power trio" that was clearly influenced by Hendrix, Zappa and LSD and perhaps Karlheinz Stockhausen. According to Wikipedia they lived in a commune and gigged with bands such as Amon Duul and Agitation Free. Later they more or less merged with another commune band, Kraan, for a few releases.

Guru Guru were looser, more improvisational and noisy than most of the Krautrock bands of that time. They were fairly popular and have continued to have some presence of a band centered around Mani for over 30 years and 20 albums.

One notable reviewer, Piero Scaruffi, says that on their 2nd album, Hinten, they were "misunderstanding Jimi Hendrix and the Cream as a wall of noise that will be surpassed only by the Japanese bands of a few years later." That LP came in a gatefold cover with possibly one of the most offensive record covers ever. The rear cover had a shot of a naked hairy man's behind, and the inside had a close-up apparently shot from the floor, zoomed in to fill the 24" inside of a gate-fold LP with some other hairy skin that left it to your imagination to figure out what it was.

Uli Trepte supposedly freaked out and left after a few albums but the band continued on with various lineup changes and multi-instrumentalist Roland Shaeffer took on an important role once Uli Trepte and Ax Geinrich had left.

There are a few distinct tangents to Guru Guru. There is a comedic element that occasionally surfaces, with Mani dressed in clown outfits on some album covers and a bit of a goofy feel to songs such as a strange marching band tune. Cartoon characters occasionally speak to us in their songs, on song titles such as Dagbert Duck, or a conversation in the woods with a woodpecker. One song, Set Your Chickens Free, was based on an underground film about some farmer who had an LSD trip and set his chickens free.

Early on there was also 50's rock and roll influence on that seemed largely centered around Ax Geinrich, who seemed to waffle a bit between fairly straight ahead rock and roll riffs and also headed farthest out into space with his guitar freak-outs. Roland Schaeffer joined on for a long stint on multiple instruments and nudged the band more to a funky, jazzy fusion era. Mani continued on over 30- years with a wide supporting cast of musicians, many known from other Krautrock bands.

Guru Guru went through a mid-70's Mahavishnu influenced phase with the album Dance of the Flames. The 1975 album Mani und Seine Fruende (Mani and Friends) included guest appearances by a who's who of bands including members of Cluster, Karthago and Kraan. Some of the Kraan folks appeared on other releases including Globetrotter. Mani got off into a funky space jazz rock period towards the end of the 1970's, playing live to large audiences.

Scaruffi describes the works since 1982 as a clone of Hawkwind, which seems a bit overly generalized but it does correctly cite the difference in consistency since 1979 as a cut-off point where the band diverges from their heyday. Still, Mani keeps on ticking and seems to have been an unstoppable force who never strayed far from his sense of humor and his core musical visions.