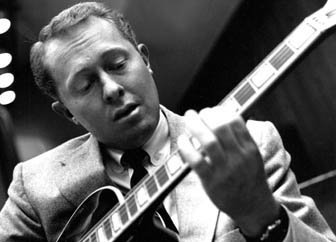 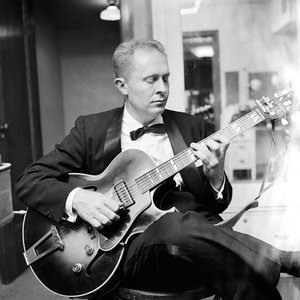 Growing up on the outskirts of Dallas, Texas, Ellis first heard the electric guitar performed by George Barnes on a radio program. This experience is said to have inspired him to take up the guitar. He became proficient on the instrument by the time he entered North Texas State University as a music major. Ellis majored in music, but because they did not yet have a guitar program at that time, he studied the string bass. Unfortunately, due to lack of funds, his college days were short lived. In 1941 Herb dropped out of college and toured for 6 months with a band from the University of Kansas.

In 1943 joined Glen Gray and the Casa Loma Orchestra and it was with Gray's band that he got his first recognition in the jazz magazines. After Gray's band, Ellis joined the Jimmy Dorsey band where he played some of his first recorded solos. Ellis remained with Dorsey through 1947, traveling and recording extensively, and playing in dance halls and movie palaces. Then came a turnabout that would change Ellis's career forever. Then, as pianist Lou Carter told journalist Robert Dupuis in a 1996 interview, "The Dorsey band had a six-week hole in the schedule. The three of us had played together some with the big band. John Frigo, who had already left the band, knew the owner of the Peter Stuyvesant Hotel in Buffalo. We went in there and stayed six months. And that's how the group the Soft Winds were born."

The Soft Winds group was fashioned after the Nat King Cole Trio. They stayed together until 1952. Herb Ellis then joined the Oscar Peterson Trio (replacing Barney Kessel), forming what Scott Yanow would later on refer to as "one of the most memorable of all the piano, guitar, and bass trios in jazz history".

Ellis became prominent after performing with the Oscar Peterson Trio from 1953 to 1958 along with pianist Peterson and bassist Ray Brown. He was a somewhat controversial member of the trio, because he was the only white person in the group in a time when racism was still very much widespread.

In addition to their great live and recorded work as the Oscar Peterson Trio, this unit served as the virtual "house rhythm section" for Norman Granz's Verve Records, supporting the likes of tenormen Ben Webster and Stan Getz, as well as trumpeters Dizzy Gillespie, Roy Eldridge, and Sweets Edison and other jazz stalwarts. With drummer Buddy Rich, they were also the backing band for popular "comeback" albums by the duet of Ella Fitzgerald and Louis Armstrong.

The trio were one of the mainstays of Granz's Jazz at the Philharmonic concerts as they swept the jazz world, almost constantly touring the United States and Europe. Ellis left the Peterson Trio in November 1958, to be replaced not by a guitarist, but by drummer Ed Thigpen. The years of 1959 through 1960 found Ellis touring with Ella Fitzgerald.

The three provided a stirring rendition of "Tenderly" as a jazz improvisational backdrop to John Hubley's 1958 cartoon The Tender Game, Storyboard Film's version of the age-old story of boy falling head over heels for girl.

Herb Ellis died at his home in Los Angeles on March 28.

(2) An excellent bop-based guitarist with a slight country twang to his sound, Herb Ellis became famous playing with the Oscar Peterson Trio during 1953-1958. Prior to that, he had attended North Texas State University and played with the Casa Loma Orchestra, Jimmy Dorsey (1945-1947), and the sadly under-recorded trio Soft Winds. While with Peterson, Ellis was on some Jazz at the Philharmonic tours and had a few opportunities to lead his own dates for Verve, including his personal favorite, Nothing But the Blues (1957). After leaving Peterson, Ellis toured a bit with Ella Fitzgerald; became a studio musician on the West Coast; made sessions with the Dukes of Dixieland, Stuff Smith, and Charlie Byrd; and in the 1970s became much more active in the jazz world. He can be heard on the first three releases issued by the Concord label, interacting with Joe Pass on the initial two, and he toured with the Great Guitars (along with Byrd and Barney Kessel) through much of the 1970s into the '80s. After a long series of Concord albums, Ellis cut a couple of excellent sessions in the 1990s for Justice, as well as 1999's Burnin' on Acoustic Music. After battling Alzheimer's disease, Herb Ellis died at the age of 88 at his home in Los Angeles on March 28, 2010. ~ Scott Yanow, Rovi