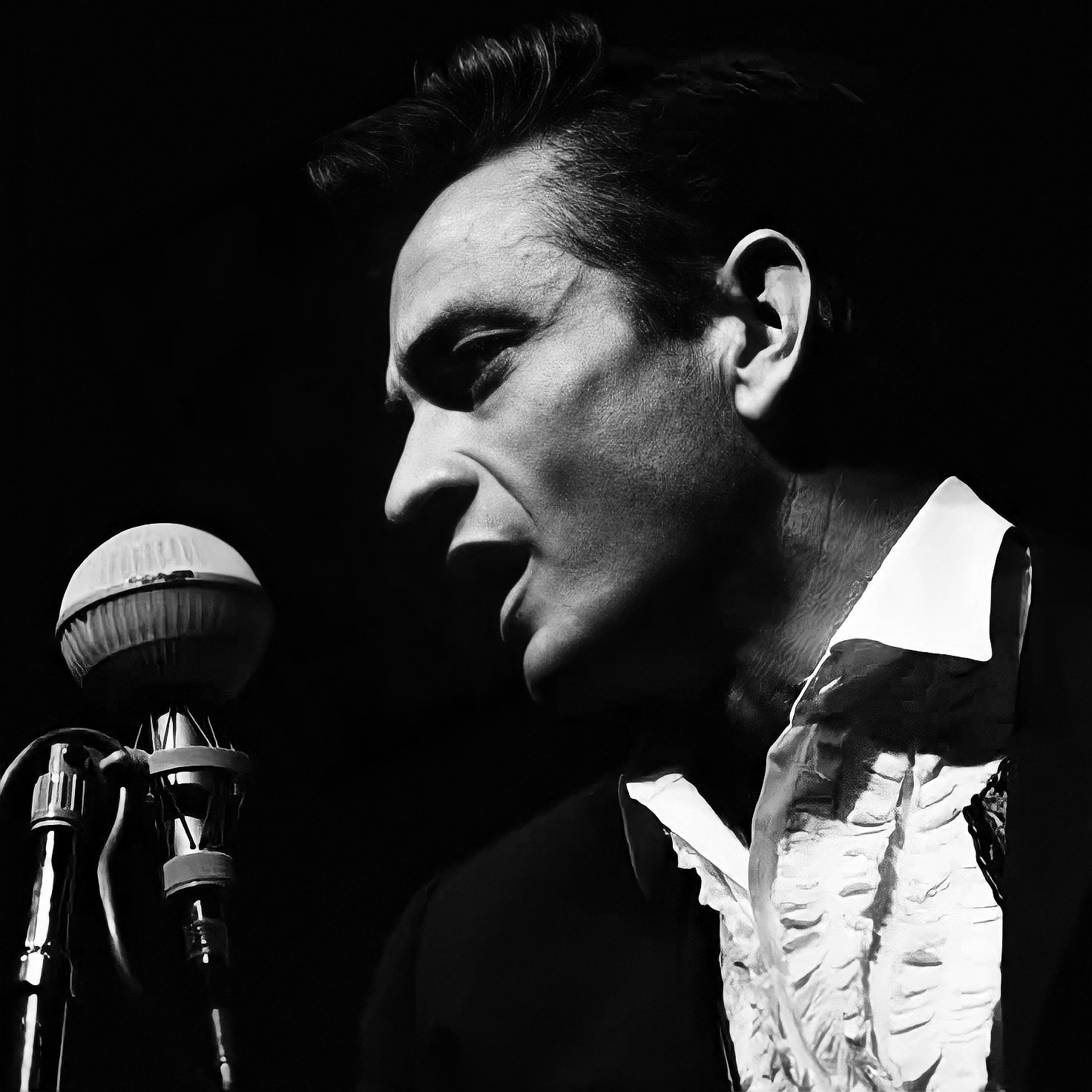 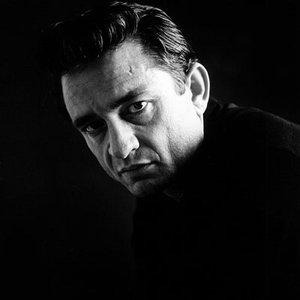 Johnny Cash (born J.R. Cash; February 26, 1932 – September 12, 2003) was an American singer, guitarist, actor, songwriter, author. He is one of the best-selling music artists of all time, having sold more than 90 million records worldwide. Although primarily remembered as a country music icon, his genre-spanning songs and sound embraced rock and roll, rockabilly, blues, folk, and gospel.

Cash was known for his deep, calm bass-baritone voice, the distinctive sound of his Tennessee Three backing band characterized by train-sound guitar rhythms, a rebelliousness coupled with an increasingly somber and humble demeanor, free prison concerts, and a trademark, all-black stage wardrobe, which earned him the nickname "The Man in Black." He traditionally began his concerts by simply introducing himself, "Hello, I'm Johnny Cash," followed by his signature song "Folsom Prison Blues".

Much of Cash's music contained themes of sorrow, moral tribulation, and redemption, especially in the later stages of his career. His other signature songs include "I Walk the Line", "Ring of Fire", "Get Rhythm", and "Man in Black". He also recorded humorous numbers like "One Piece at a Time" and "A Boy Named Sue"; a duet with his future wife, June Carter, called "Jackson" (followed by many further duets after their wedding); and railroad songs including "Hey, Porter", "Orange Blossom Special", and "Rock Island Line". During the last stage of his career, Cash covered songs by several late 20th-century rock artists, notably "Hurt" by Nine Inch Nails and "Rusty Cage" by Soundgarden.

Johnny Cash was born on February 26, 1932, in Kingsland, Arkansas, to Ray Cash and Carrie Cloveree (née Rivers). He was the fourth of seven children, who were in birth order: Roy, Margaret Louise, Jack, J. R., Reba, Joanne, and Tommy (who also became a successful country artist). He was primarily of English and Scottish descent. As an adult he traced his surname to 11th-century Fife, after meeting with the then-laird of Falkland, Major Michael Crichton-Stuart. Cash Loch and other locations in Fife bear the name of his family.

At birth, Cash was named J. R. Cash. When Cash enlisted in the United States Air Force, he was not permitted to use initials as a first name, so he changed his name to John R. Cash. In 1955, when signing with Sun Records, he started going by Johnny Cash.

In March 1935, when Cash was three years old, the family settled in Dyess, Arkansas, a New Deal colony established to give poor families a chance to work land that they had a chance to own as a result. Cash started working in cotton fields at the age of five, singing along with his family while working. The Cash farm experienced a flood during the family's time in Dyess, which led Cash later to write the song "Five Feet High and Rising". His family's economic and personal struggles during the Great Depression inspired many of his songs, especially those about other people facing similar difficulties. Consequently, Cash had sympathy for the poor and working class throughout his life.

Cash was very close to his older brother, Jack. On Saturday May 12, 1944, Jack was pulled into an unguarded table saw at his high school while cutting oak into fence posts as his job and was almost cut in two. He lingered until the following Saturday, when he died. Cash often spoke of the horrible guilt he felt over this incident; according to Cash: The Autobiography, his father was away that morning, but Johnny, his mother, and even Jack himself, all had premonitions or a sense of foreboding about that day. His mother urged Jack to skip work and go fishing with his brother, but Jack insisted on working since the family needed the money at the time. On his deathbed, Jack said he had visions of Heaven and angels. Decades later, Cash spoke of looking forward to meeting his brother in Heaven.

Cash's early memories were dominated by gospel music and radio. Taught guitar by his mother and a childhood friend, Cash began playing and writing songs at the age of 12. When young, Cash had a high-tenor voice, before becoming a bass-baritone after his voice changed.

In high school, he sang on a local radio station. Decades later, he released an album of traditional gospel songs, called My Mother's Hymn Book. He was also significantly influenced by traditional Irish music, which he heard performed weekly by Dennis Day on the Jack Benny radio program.

In 1997, Cash was diagnosed with the neurodegenerative disease Shy–Drager syndrome, a form of multiple system atrophy. According to biographer Robert Hilburn, the disease was originally misdiagnosed as Parkinson's disease, and Cash even announced to his audience that he had Parkinson's after nearly collapsing on stage in Flint, Michigan, on October 25, 1997. Soon afterwards, his diagnosis was changed to Shy–Drager, and Cash was told he had about 18 months to live. The diagnosis was later again altered to autonomic neuropathy associated with diabetes. The illness forced Cash to curtail his touring. He was hospitalized in 1998 with severe pneumonia, which damaged his lungs.

During the last stage of his career, Cash released the albums American III: Solitary Man (2000) and American IV: The Man Comes Around (2002). American IV included cover songs by several late 20th-century rock artists, notably "Hurt" by Nine Inch Nails and "Personal Jesus" by Depeche Mode. Trent Reznor of Nine Inch Nails commented that he was initially skeptical about Cash's plan to cover "Hurt", but was later impressed and moved by the rendition. The video for "Hurt" received critical and popular acclaim, including a Grammy Award.

June Carter Cash died on May 15, 2003, at the age of 73. June had told Cash to keep working, so he continued to record, completing 60 more songs in the last four months of his life, and even performed a few surprise shows at the Carter Family Fold outside Bristol, Virginia. At the July 5, 2003, concert (his last public performance), before singing "Ring of Fire", Cash read a statement about his late wife that he had written shortly before taking the stage:

"The spirit of June Carter overshadows me tonight with the love she had for me and the love I have for her. We connect somewhere between here and Heaven. She came down for a short visit, I guess, from Heaven to visit with me tonight to give me courage and inspiration like she always has. She's never been one for me except courage and inspiration. I thank God for June Carter. I love her with all my heart. "

Cash continued to record until shortly before his death. His final recordings were made on August 21, 2003, and consisted of "Like the 309", which appeared on American V: A Hundred Highways in 2006, and the final song he completed, "Engine 143", which was recorded for his son John Carter Cash for a planned Carter Family tribute album.