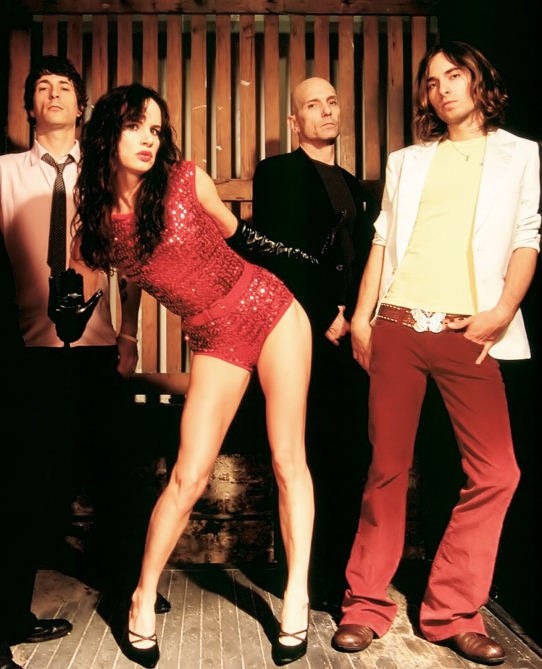 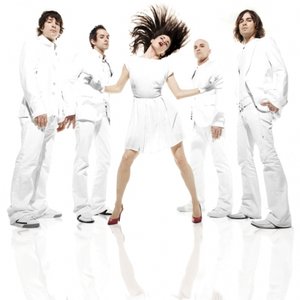 Juliette and the Licks

Juliette and the Licks is an american rock band formed in the United States in 2003 by american actor Juliette Lewis. Other band members included guitarist Craig Fairbaugh and guitarist Emilio Cueto, bassist Jason Womack and drummer Ed Davis. Their popular songs include "You're Speaking My Language" and "Hot Kiss". The band broke up in 2009.

Juliette and the Licks became a reality when Lewis accompanied Patty Schemel, drummer for Hole, to a Blondie concert and found herself staring at fate. She became instantly inspired by the “live” element of the show and knew it was her calling. Juliette began to reach out to everyone she knew to find musicians to accompany herself and Patty and soon, she found what she was looking for. The Licks became: Juliette Lewis (vocals), Patty Schemel (drums), Todd Morse (guitar) and Paul Ill (bass). “Todd Morse (H20) is not only an amazing songwriter but a perfect punk-rock rhythm guitarist”, says Lewis. “Paul Ill I’ve nicknamed 'Professor Ill' because he can reference anything from Faces to Black Sabbath to The Police.” Juliette and the Licks released their first EP …Like a Bolt of Lightning, in 2004, which was shortly followed by the release of their debut album You're Speaking My Language. The album spawned their most successful single "You're Speaking My Language", and the less successful, disco influenced "Got Love to Kill". The released version of the second single was a remix of the original song, which had a more rock influence.

Morris left the band before sessions for the 2nd album had begun. The Licks then recruited Foo Fighters frontman Dave Grohl to fill the gap. Grohl then went on to ask the Licks to be a guest act at the Foo Fighters sell out Hyde Park performance on the June 17, 2006, to around 85,000 people (other acts were Angels & Airwaves, Queens of the Stone Age and Motörhead). At the same event, Lewis and Moa Holmsten from Meldrum came on stage for one of Motörhead's songs to do backing vocals.

After their performance at Hyde Park, their second album Four on the Floor, was released in late 2006. "Hot Kiss" which was one of the Licks' most successful singles, was the first release from the album, though the following single, "Sticky Honey", proved less commercially successful.

With the release of their second album, Juliette and the Licks went on tour in late 2006 in America and many parts of Europe. They once opened for Muse, and Chris Cornell.

On September 27, 2007, the band appeared at MTV Brasil's music awards, the MTV Video Music Brasil, presenting an award and performing as well.

The band appeared at the 2008 MTVAAs on April 26 in Sydney, Australia. They both performed as one of the headlining acts and presented at the show. They were well appreciated and highly regarded at the Awards Show and at their subsequent gigs in Australia.

As of 2008, Todd Morse was no longer with the band. While there was no official statement made from the Juliette and the Licks camp Morse commented via a MySpace blog on May 1, 2008 he would not be touring with the band on their current tour. Morse stated "Just let me say that I love all you J.&T.L. fans and totally appreciate all your continued interest in my music and life. I don't know what the future holds but this what's best for me right now." Craig Fairbaugh has replaced Morse on the Juliette and the Licks tour.

A remix of the band's song "Inside The Cage" can be heard in the video game Grand Theft Auto IV on the Radio Broker station, where Juliette herself is the featured DJ.