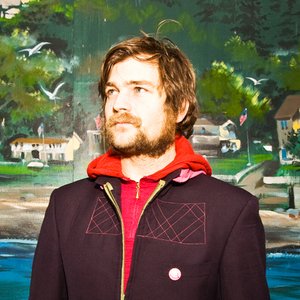 Karl Blau is a musician based in Anacortes, Washington and member of the Knw-Yr-Own/K Records collective. He is very prolific and releases music through a monthly subscription service called Kelp Monthly. He has played in D-, Brothers Blau, Captain Fathom, Your Heart Breaks and has collaborated extensively with Phil Elverum (The Microphones/Mount Eerie). He also tours and records with Laura Veirs. Blau is currently a member of drone/doom band Earth.

From Karl's own unbiased biography, available on the K Records website:

"I, Karl Blau, am a recording artist from Anacortes, WA. My debut K record "Beneath Waves" should be available in January of 2006. You may have heard my flute, sax, or drums on various K records. I've recorded with Mirah, Wolf Colonel, the Microphones, Little Wings, and I'm one third of the band D-(with Phil Elverum and Bret Lunsford). And more recently I've been touring & recording with the fabulous Laura Veirs.

About 2 years ago I started an "album-a-month club" called KELP! monthly. KELP! is a documentary label tracing my musical path, an avenue for my over-active creative side. People who enjoy the mystery subscribe up to a year and start receiving my records which have included–but will not be limited to–full length albums of mine and artists I'm producing, field recordings, compilations of artists and ambient art records.

I was born into music; my parents met in high school band, Dad was a trumpeter and Mom french horn. I was required to study music starting with 3 years piano, but quickly moved out of the shadow of my older brother's skills and into classical guitar and started getting together with friends and forming bands as early as 12 years old.

With a long stint in the dance band Captain Fathom that lasted through college in Bellingham, I learned the value of all age shows. Captain Fathom played the Skagit Valley's Rexville Grange hall and other halls and spaces, and the shows acted as community gatherings of babies to elders. Through the Fathom years I had found a love for 4-tracking and started uncovering the rich, independent music of Anacortes. Frequenting Anacortes I became acquainted with Bret Lunsford and met and admired a young Phil Elverum. Forming around Bret's incredible lyrics, we brought our band D- to Olympia for a recording, myself completely unaware of the vast network that is the hub of Olympia(this is 1997 I think). We fell out of our cars and landed in the backyard of the ABC house with Mirah singing backed by Old Time Relijun to a yard full of dining Olyfolk. My mind was blown that a community could be so organized and focused on creating such a memorable occassion. I met Calvin and he seemed to open his doors to anyone whose heart drove them there. My Olympia admiration was further deepened by unearthing the K catalogue and tracing it back to Anacortes."