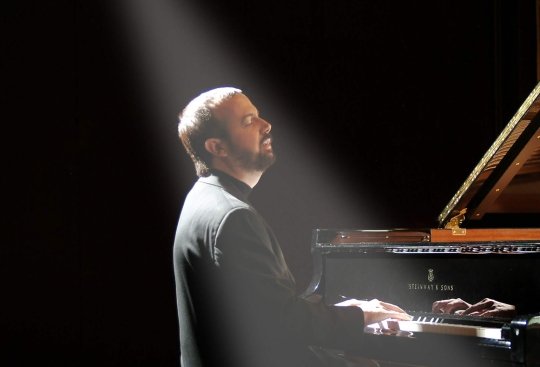 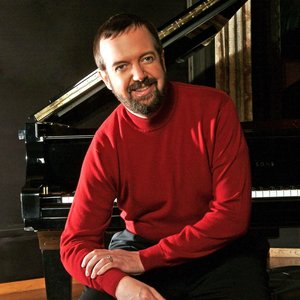 For more than a decade, Steinway Artist KEVIN KERN has become synonymous with beautiful and relaxing music. His recordings and concerts have established him as both a gifted composer and a brilliant performer.

“My music has always drawn from three main influences, a strong classical education, a love of cinematic writing, and a deep respect for the great popular songwriters who have gone before me. With my latest CD, Endless Blue Sky, I drew on all of these inspirational sources to create music that runs the gamut from lyrical to vibrant.”

Born in Detroit, Kevin Kern began playing piano at the tender age of 18 months. Though legally blind since birth, his exceptional talent soon became clear. His earliest musical influence was jazz legend George Shearing, whom he met as a child. With George as a mentor, Kevin developed an early love of improvisation and an appreciation for the beautiful sound a piano could produce. In addition to Shearing's contribution, he received an extensive classical education. From these experiences, Kevin developed his trademark sound where melodies exude lyricism, simplicity, and a directness that touches the heart of the listener.

Beginning with his phenomenally successful debut CD, In the Enchanted Garden, in 1996, which appeared on the Billboard charts for 26 weeks, Kevin has developed his own unique musical voice. In the years since the release of In the Enchanted Garden, Kevin's recorded output has ranged from the classically flavored cinematic melodies of Summer Daydreams, to the simple yet haunting themes on Embracing the Wind, and the more organic sounds of The Winding Path.

The opening and closing selections from Summer Daydreams, "Le Jardin" and "Return to Love", were prominently featured in the popular Korean drama, Autumn in My Heart. The inclusion of Kevin's poignant melodies in this drama, which can still be seen regularly around the world played a key role in developing his global following.

Kevin's music has appeared in film and television both in the U.S. and abroad. In addition to the Korean drama series, his music has been heard as part of the 2000 Summer Olympics, Live! With Regis and Kelly, The Late Show with David Letterman, Oprah, NPR, PBS, and in commercials for Mitsubishi and Blue Shield of California, among others.

In response to the constant demand for sheet music of his best loved compositions, Kevin has devoted his energies to the creation of solo piano arrangements of selected pieces from his Real Music Catalog and from his new catalog, Kevin Kern Music.

Kevin's lastest CD, Christmas, and it's companion songbook will be released on October 15, 2012.

(2) Kevin Kern was a child prodigy playing the piano at the astounding age of eighteen months. He began studying with a private tutor at the age of four. Founding his own group, the Well Tempered Clavichord at age fourteen they made their professional debut. Kevin attended the University Of Michigan's School Of Music and studied with renowned pianist Mischa Kottler.

Kevin received a Master's Degree in Performance and a Bachelor of Music Degree from the New England Conservatory Of Music. After leaving school he played the local scene of Boston for ten years. In 1990, Kevin moved to San Francisco and began playing live gigs. The more he played, the larger his audience grew. Already an accomplished musician, Kevin was discovered in 1995 by Terence Yallop, the founder of Real Music label. He was at the time playing piano in a local San Francisco hotel. After signing Kevin to the label, he immediately started working on his first album. With an incredible flair for composition, the songs seemed to come from him effortlessly. 1996 was the beginning of his record career with the release of In the Enchanted Garden. It was an instant hit among the new age, jazz, and classical audience. It also became a critic's favorite. His second release, Beyond the Sundial, takes the music to another level. Kevin's influences run right across the board. His music is melodic and truly inspiring. With the release of Summer Daydreams, in 1998, Kevin returns to the scene with more incredible compositions, adding violin and cello to the arrangements; In My Life followed in 1999 and Embracing the Wind was issued in early 2001. Kevin Kern is a definite mainstay in the world of music. ~ Tina Mrazik, Rovi