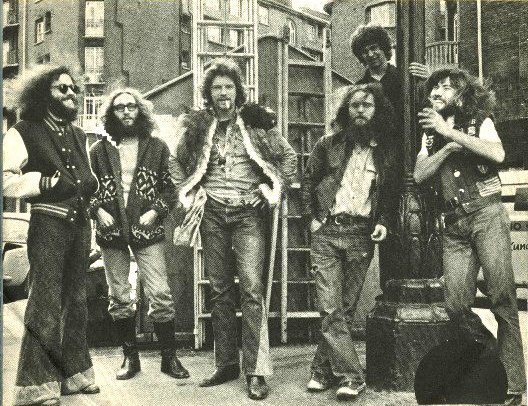 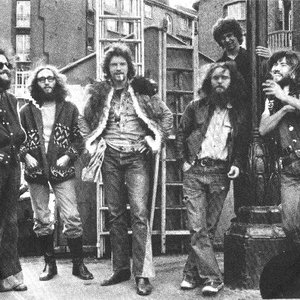 There are two entries for King Harvest.

For the four musicians who would eventually band together to form King Harvest – David “Doc” Robinson, Eddie Tuleja, Rod Novak and Ronny Altbach - whatever their original plans had been when they applied to the prestigious Cornell University, the college’s 53 fraternities, local bars, and the many other colleges within easy driving range presented an opportunity that pushed them away from their original scholarly goals, to become rock musicians.

By 1969, they banded together, with a few other friends, in a copy band that was tearing up Ithaca New York in those politically troubled times. They played songs from Sly and the Family Stone, Traffic, Hendrix, Dr. John and, finally, The Band – a mixed yet cohesive core of soulful music. And then they dispersed, presumably to "grow up".

However, within two years these four had regrouped in Paris, France, where they built a reputation as the one and only American touring band, playing clubs, pop festivals, and generally enjoying a lifestyle of motorcycles, music and, women. By this time, the band was performing, for the most part anyway, songs that the various members had written. Again, the musical range went from R&B tinged funky tunes to harder rock songs, influenced by their heroes but increasingly influenced by The Band. In fact, after recording and performing under various names - e.g. E Rodney Jones and the Prairie Dogs ( what did the French know anyway?), they settled on the title of one of their favorite Band songs, “King Harvest Has Surely Come,” and won a rock contest under the name “King Harvest.” It stuck.

The core of the band remained constant, but drummers came and went. In 1971, their old friend and one of the greatest rock drummers ever, Wells Kelly (Wells later became a founding member of Orleans but died in 1984) came to live with Doc, Eddie, Rod and Ronny in their walled-in villa in the small town of Orgeval, west of Paris, and brought with him new music - various albums like CSN&Y- but also a song his brother Sherman had written and recorded with a short lived group, Buffalongo (which included Doc, and Larry Hoppen who later would play with Wells in Orleans). That song was the single "Dancing In The Moonlight." Wells didn't stay long in the band, but his gift became the cornerstone of the future of the group.

In the spring of 1971, the band signed a recording contract with the French record company Musidisc, and in the fall of 1971, the group recorded Dancing in the Moonlight in a small studio in the 18th district of Paris. Small means small. Eddie had to sing lead out in the stairwell, which was a natural echo chamber (as long as the neighbors didn't come out during the recording), and the peculiar percussion sound they got was the result of using a toilet brush instead of some more modern percussion instrument.

To prepare for the recording, the group worked with their two producers, Pierre Jaubert, who really had been instrumental in signing the band to Musidisc and keeping the band together over a couple of years by providing recording opportunities and generally acting as the band's best friend, and Jack Robinson, a talented music publisher who came up with the idea of playing the intro to the tune up in the higher octaves, which became the song’s signature as it became a hit on AM radio in the United States. Jack was the hands on producer of the record, and was a true believer in the record.

The recording finished, the group, typically in the tradition of rock and roll, broke up. The record was initially released in France by Musidisc, without much success. But Jack and Pierre thought the record would do well internationally, and didn't give up on it. Eventually, after shopping the master to every international label from the UK and the US to anyone who would open the door to these two guys from Paris, they found Perception Records, a very small R&B label in NYC. Under a three year license with Musidisc, Perception released the single, and when it started to get airplay- largely as a result of Jack Robinson banging on program directors' doors in the Pacific Northwest- the group came back together - Doc and Eddie from a large sailing boat making frequent trips back and forth from Spain to North Africa , Rod from a meditation course in Spain where he was rooming with Sherman Kelly, and Ronny from a West Coast classical piano tour he was performing - and along with other musicians who came in and out of the band along the way, settled in upstate NY, close to their college "roots”, in the little town of Olcott Beach on the shore of Lake Ontario, where the band was offered the basement of the local methodist church as their practice room and where King Harvest legends still abound.

King Harvest toured once, with Jay Leno as the opening act for a few of the venues, but eventually Perception Records went out of business just as the follow up single, A Little Bit Like Magic, entered the charts, and once again the band disbanded.

There was one more shot, in the mid '70s, when Kip Cohen, head of A&R at A&M Records signed King Harvest to an album deal and hooked the band up with legendary songwriter Jeff Barry as producer. By this time, various members of the group were involved in the Beach Boys touring band and in recordings by the Beach Boys, and in fact it was in the Beach Boys' studio that the King Harvest Album (a collector’s item) was produced, with Carl Wilson, Mike Love singing background along with Peter Cetera of Chicago, and with jazz great Charles Lloyd playing a guest solo on one of the songs. In the end, the band's song "Old Friends" probably sums up the journey - "old friends, when the story ends, we'll still be good as gold."