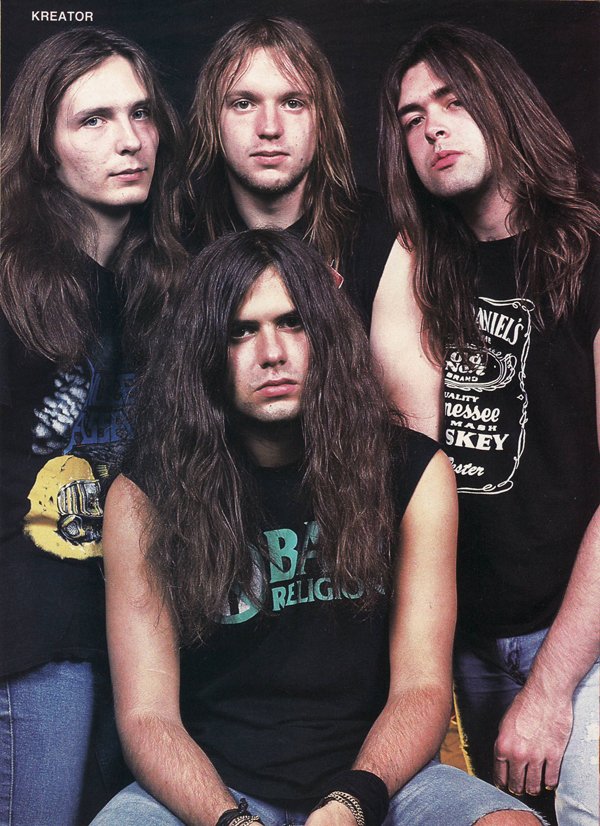 Kreator is a german thrash metal band from Essen (NRW), Germany. Originally started off under as Metal Militia, then as Tyrant and later as Tormentor before permanently deciding for Kreator in 1982. Initially playing a thrash metal with Venom influences, their style of music is similar to that of their compatriots Destruction and Sodom, which are considered the other two big teutonic thrash metal bands from Germany. All three of these bands are often credited with helping create the death metal subgenre.

Kreator's work has been consistently in the vein of pure thrash, with the exception of four albums (Renewal, Cause for Conflict, Outcast and Endorama) during the 1990s when they undertook serious experimentation. Incorporating Industrial, Gothic and Avant-Garde elements into their sound, the results were uneven in some fans' and also critics' eyes. The band has since incorporated melodic death metal elements into their thrash sound, particularly that of the gothenburg scene.

Kreator formed as Tyrant in 1982 in Essen, Germany. The original lineup featured vocalist/guitarist Miland "Mille" Petrozza, drummer Jurgen 'Ventor' Reil, and bassist Rob Fioretti. They soon changed their name to Tormentor and released two demos. They changed the name of the band again to the final one, Kreator and signed to Noise Records in 1985. The name Kreator is not just a play on the English word "creator", it's also a name of a demon in the German mythology. Mille thought it was a cool name so the band settled with this new name instead of "Tormentor".

They recorded their debut album, Endless Pain, in just 10 days. Legions of black and death metal bands call it one of their major influences. The band hired the late Sodom guitarist Michael Wulf for the albums tour.

Wulf was in the band for a few days and didn't play on the band's next album, 1986's Pleasure to Kill, despite his getting credit. A new guitarist, Jörg "Tritze" Trzebiatowski joined the band and he played on this album, which is widely considered a thrash classic. Produced by Harris Johns (Helloween, Voivod), it is arguably one of the heaviest, fastest albums in metal, while showing the band growing in talent and technical ability. The song "Flag of Hate" became an early hit, and the band became one of the most promising up-and-coming European metal acts. With Tritze the band started their first tour ever (before the release of Pleasure to Kill they had only played 5 gigs total). The band closed out the year with the Flag of Hate EP.

In 1987 Kreator released Terrible Certainty, which is often considered to be Kreator's best album as the arrangements on the album were more complex and the tempos more varied. The album featured another hit "Behind The Mirror", and the band's popularity continued to grow. They managed to find enough time and money (coming from the concerts) to finance another EP Out of the Dark … Into the Light.

In 1988 Kreator signed with major label Epic Records. Their debut with Epic, 1989's Extreme Aggression, recorded in Los Angeles, became a metal hit. Continuing the Terrible Certainty formula while showing the band still progressing musically and with better production by the well-regarded Randy Burns (also Megadeth among others), the album featured the band's first major singles and music videos, the title track and "Betrayer", becoming major hits on MTVs Headbangers Ball. They toured North America with Suicidal Tendencies, which greatly expanded their popularity outside of Europe.

In 1989 German director Thomas Schadt made a documentary about Kreator (focusing on the social aspect of heavy metal in the Ruhr Area) titled Thrash Altenessen (named after the band's hometown, a suburb of Essen). Tritze left Kreator after Extreme Aggression. In 1990, with new guitarist Frank "Blackfire" Gosdzik (also formely of Sodom), the band released Coma of Souls. This album was not quite as praised as the bands previous few albums (many felt the album was "rushed" and repetitive), but still managed to do quite well, with "People of the Lie" becoming a hit. However, things changed in the 90's. With many other thrash bands such as Metallica, Megadeth, Anthrax, and others changing their sound for a more commercial approach, Kreator began experimenting with death metal and industrial metal around this time.

The result was 1992s Renewal, which featured heavy death metal and industrial influences. While reaching a newer, more commercial audience, the band upset many longtime fans, accusing them of "selling out". The band, once known for being an excellent live act, had disappointing shows and tours for this album due to the industrial influences.

The excruciatingly taxing touring commitments that followed took the band as far as South America, but understandably left them physically and creatively exhausted. The band began to fall apart around this time, founding member Rob Fioretti left the band after the recording of the album as he wanted to spend more time with his family and was replaced by Andreas Herz, who never played any official release. In 1994 Reil left as well, leaving Petrozza the sole original bandmember. Reil was replaced by Joe Cangelosi. Herz left in 1995 and was replaced by Christian Giesler. To make matters worse, their contract with Epic was dropped. Now on G.U.N. Records the new lineup put out the album Cause for Conflict that year. The result was their most modern album at that time, the sound on this album had influences from Pantera and Machine Head, a slight return to a harsher sound than on the previous album.

Gosdzik and Cangelosi left in 1996 and were replaced by Tommy Vetterli (formerly of Coroner), and, surprisingly, Jurgen Reil. The band continued to experiment with their sound, releasing Outcast and Endorama, both of which experimented with goth and ambient influences, incorporated samples and loops and even found Petrozza trying a few different singing styles on for size. It also retained the groove metal influences. The record sales went down, by the end of the '90s the band reached both commercial and critical nadir. Though frontman Mille Petrozza never cared about this: "For us, success doesn't define in record sales. So all our albums have been successful for us, because we've achieved what we were aiming for…".

However, in 2001, with new guitarist Sami Yli-Sirniö, the band released their "comeback" album Violent Revolution, which saw the band returning to their classic thrash style (albeit they used a lot of melodic metal and so called Gothenburg metal riffs). It was praised by fans and critics alike. The tour was extremely successful and introduced Kreator to a younger generation of metal fans. A live album Live Kreation and live DVD Live Kreation: Revisioned Glory were released in 2003, and a new studio album - still retaining a style closer to old school thrash metal - Enemy of God was released in 2005. This album also saw a special edition re-release in 2006 called Enemy of God: Revisited. In early 2006, Kreator toured North America and Canada with Napalm Death, A Perfect Murder, and Undying. In 2007 Kreator had a European tour with Celtic Frost and Waatan. Kreator were to tour 2008 with King Diamond, Leaves Eyes, and Cellador, however the tour has been cancelled due to back issues with King Diamond.

In July of 2008 Kreator entered the Titonus Studios in Germany with producer Moses Schneider to record their twelfth studio album: Hordes of Chaos. The record was mixed by Colin Richardson and released worldwide under Steamhammer Records on the 13th January 2009. The record has been described as their most organic album to date because, barring vocals, guitar solos and some melodies, the album was recorded in a live setting on analog tape recorder with very few overdubs. Frontman Mille Petrozza noted that this was the first time they have recorded an album this way since Pleasure to Kill in 1986.

The album was released in three different formats. The standard edition was issued in a jewel case and features the 10 album tracks. A deluxe edition features a bonus DVD with a making of the album documentary. The LP version of the album has different artwork to the other versions.

The album debuted at number 165 on The Billboard 200 chart in the US, with first week sales of approximately 2,800 copies.

The album was re-released as the 'Ultra Riot' box set edition in mid 2010. It featured new artwork, extended liner notes, promo videos, a bonus disc with demo tracks and cover songs and various pieces of memorabilia (such as a photobook, sticker, poster and photo card).

Kreator toured on the back of this album throughout 2010, and Mille has recently confirmed that 2011 will primarily be a song-writing year for the band.