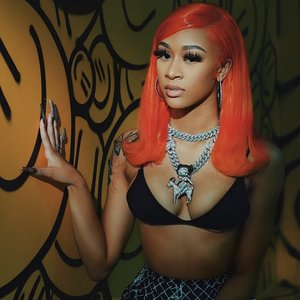 In 2017, her career in music began when Lakeyah joined a group as a duo called “BTM” (beyond the music). Only after a year of building a musical fan base, BTM decided to split ways and Lakeyah began her journey as a solo artist.

Once she turned 18 in 2019, a birthday trip to Atlanta changed her career trajectory after she saw Quality Control Music's exhibit at T.I.'s Trap Museum. Now an Atlanta resident, she continued to drop new music and tag QC cofounder Pierre "P" Thomas on her social media posts, remixing QC songs in hopes of getting onto his radar.

Her strategy paid off in late 2019, when she went viral for her swing at the #FirstDayOutChallenge.
P called Lakeyah in January of 2020, trying to get a read on her, then didn't reach back out until she smoked another freestyle. This time, she delivered rhymes over Lil Baby and 42 Dugg's "We Paid." Lil Baby retweeted her on Twitter and gave her props; P signed her a week later.

Lakeyah released two mixtapes "Time's Up” which includes her debut single, "Big FlexHer," alongside 42 Dugg, and “In Due Time" nabbing guest verses from Gucci Mane and Yung Bleu.

Lakeyah was included on the 2021 XXL Freshman Class, she's the first Milwaukee rapper to join the list.