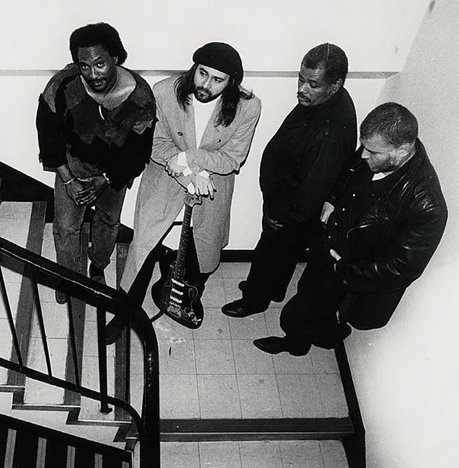 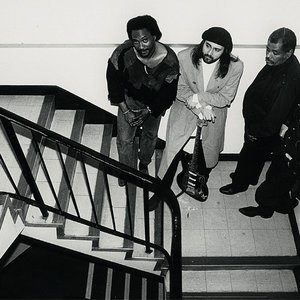 There are at least three bands with this name:

1) Last Exit was an avant-garde jazz supergroup composed of electric guitarist Sonny Sharrock, drummer/occasional vocalist Ronald Shannon Jackson, saxophonist Peter Brötzmann, and bass guitarist Bill Laswell. They were active from 1986 to about 1996, releasing primarily live albums recorded in Europe. Sharrock's death in 1994 caused the dissolution of the band, though touring had not occurred for several years before his passing.

The band was known for its uncompromising musical ferocity, fueled by the band members' confrontational attitudes. Greg Kot writes that they brought a level of "volume and violence that makes most rock bands sound tame." Their music was largely improvised; John Dugan writes "Granted, one person's free improvisation is another's tuneless chaos, but Last Exit, due primarily to the skill of its individuals, only infrequently fell off the precipice into the netherworld of arty wanking … The playing is intricate, wildly adventurous, frequently funny, and, perhaps most important, a tribute to musical democracy in action."

Far louder than most jazz bands (even than most free jazz groups) Last Exit found a modest following among some more open-minded hardcore/punk fans. The band released five live albums, one of which, 1986's The Noise Of Trouble, contains guest appearances from Herbie Hancock and Akira Sakata. Most of their albums were released on Enemy Records, but the band's sole studio effort, Iron Path, was released in 1988 on Venture, a subsidiary of Virgin Records. Enhanced by Laswell's studio atmospherics, Iron Path found the band somewhat more restrained. It contains less of their blistering live sound, focusing more on studio textures and experiments.

Most of Last Exit's albums have been out of print for years; however, in 2005, Atavistic Records' Unheard Music Series reissued Köln. The material heard on Köln was actually recorded in Germany on February 12, 1986, four days before the Paris concert that was recorded for the release issued as their 1986 Self-Titled debut album.

In a 1993 interview, Sharrock noted the likelihood that all of Last Exit's performances were recorded.

2) Last Exit was a British jazz fusion band formed in Newcastle upon Tyne England in 1974, and is best remembered as the group Sting was in before finding stardom with The Police. The band name came from the book Last Exit to Brooklyn. Last Exit was composed of drummer Ronnie Pearson (also of the Phoenix Jazzmen), guitarists John Hedley & then Terry Ellis, keyboardist Gerry Richardson, and bassist and singer Sting.

The band was a leading act around Newcastle for several years. They emulated the rock-jazz-fusion style of Return to Forever and were 'ahead of their time' with their skillful solos and driving beat. They released a single in 1975, Whispering Voices (a Richardson composition), and in 1976, Last Exit recorded some demos in the Pathway Studios in London. The demo made little impact, but did impress Virgin Records head Richard Branson, who signed Sting for his publishing company before their friendship soured. In 1977, Last Exit moved to London but after a few gigs half of the band returned to Newcastle, and Sting and Richardson started looking for other jobs. Richardson worked with Billy Ocean's band as musical director, while Sting joined Stewart Copeland and Henri Padovani and formed The Police. That same year, Last Exit play their last concert in Newcastle.

In 1996 Sting invited Gerry Richardson to play organ on his album Mercury Falling.

Several Last Exit songs were later reworked by Sting to feature in The Police's and Sting's solo albums:

* "I Burn For You", "The Bed's Too Big Without You", and "Oh My God" were recorded by The Police under the same name, the first being on the Brimstone and Treacle soundtrack, the second on Reggatta de Blanc, and the third on Synchronicity;
* "Carrion Prince", "Truth Kills", and "Savage Beast" are early incarnations of "Bring on the Night" (from Reggatta de Blanc), "Truth Hits Everybody" (from Outlandos d'Amour), and "We Work the Black Seam" (from The Dream of the Blue Turtles) respectively;
* The lyrics of "Fool in Love" were reused in The Police song "So Lonely" (from Outlandos d'Amour).

The songs "Don't Give Up Your Daytime Job" and "Don't You Look At Me" were considered for The Police album Ghost in the Machine, but were later dropped. They are, however, available as demos on several bootlegs.

3) Justin K Broadrick's power electronics moniker from mid-80s, only 2 appearances from compilation cassettes have been able to be recovered so far.