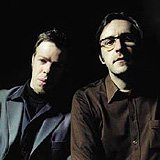 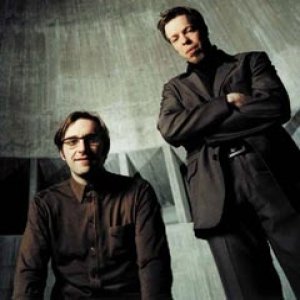 Jochen has been playing rhodes in a brasil-jazz combo – together with the Gammas` live bassist Pe Spier- where he has developed his own ideas of harmonics and sound. Marc, co-founder of Augsburg`s legendary “Vibe Klub” had always been obsessed by the idea of combining electronic and acoustic music. Though living in the same town. Trying to rearrange an old vocal-jazz tune, Mark despaired because his knowledge didn`t go beyond c-sus. The only suitable pianist for this complex song who came to his mind was Jochen. After some bars it became obvious that their musical minds thought along the same lines.“Les Gammas”, named after some extraterrestrial hippies of a TV language course, had landed.

Their first track,”Servus Mr. Bond” (Compost Records) had already conquered the clubs as dubplate before being put on their debut maxi. Since then the Gammas have been working on their own special soundworld, ranging between club and concert hall, exotic and electronic, between soul and soundtrack. The Remixes Marc and Jochen produced so far for Bugge Wesseltoft, Syrup and Moodorama are renowned. Every track is a step into unknown terrain, a pleasurable or unexpected discovery and revelation of the personal musical background, which was maybe thought lost. Every new track is an exercise for the following one, without knowing, what or how it’s going to be like. Free-jazz legend Karl “Dr.B” Berger must have sensed this open-minded musical sensitivity, when the Gammas talked to him after one of his concerts. Since then he`s been paying visits to the “Solinarium” whenever he`s in Germany and his contributions to the Gammas`songs will surely not to be confined to their first album. The same applies to Ingrid Sertso, whose unparalleled voice gave “Love To Be ” a supernatural touch.