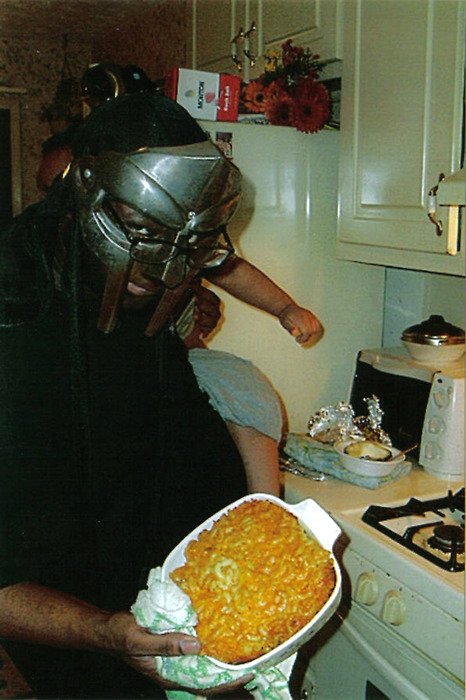 Daniel Dumile (13 July 1971 – 31 October 2020) was a British-American rapper, songwriter, and record producer. He performed and released music under a variety of stage names, most notably MF DOOM, which Dumile preferred to be stylized in all caps. Dumile debuted during hip-hop's golden age of the late 1980s and became a major figure in underground hip-hop of the early 21st century. He is widely considered to be one of the greatest rappers of all-time.

Born in London, Dumile moved with his family to Long Island, New York at a young age. He began his musical career in 1988 as a member of the East Coast hip-hop trio KMD, at which time he performed under the name Zev Love X. KMD disbanded in 1993 following the death of Dumile's brother, DJ Subroc. After taking a hiatus from the music scene, Dumile reemerged in 1998, when he began performing at open mic events while wearing a mask. He adopted the MF DOOM persona and rarely made unmasked public appearances from that time onward. His metal mask resembles that of Marvel Comics supervillain Doctor Doom, who is depicted rapping on the cover of his 1999 debut solo album Operation: Doomsday. In the early 2000s, Dumile also released solo albums under the pseudonyms King Geedorah and Viktor Vaughn.

Dumile was born on 9 January 1971 in London, England, the son of a Trinidadian mother and a Zimbabwean father. His family moved to Long Island, New York, when he was a child; Dumile remained a British citizen. Dumile grew up in Freeport, New York, and first started DJ'ing during the summer after third grade. Dumile had lived in London since 2009. Dumile was a follower of the Nuwaubian Nation.

Dumile created the MF DOOM character as an alter ego with a backstory he could reference in his music. The character combines elements from the Marvel Comics supervillain Doctor Doom, Destro, and the Phantom of the Opera; like Doctor Doom and Phantom, Dumile referred to himself in the third person while in character. His signature mask was similar to that of Doctor Doom, who is depicted rapping on the cover of Dumile's 1999 debut album Operation: Doomsday.

Dumile wore the mask while performing, and would not be photographed without it, except for short glimpses in videos and in earlier photos with KMD. Later versions of the mask were based on a prop from the 2000 film Gladiator. Academic Hershini Bhana Young argued that, by appropriating the Doctor Doom mask, Dumile "positions himself as enemy, not only of the music industry but also of dominant constructions of identity that relegate him as a black man to second-class citizenship".

Dumile's rap persona MF DOOM was known for his unique free-association rap style, challenging the conventional style of rhyming and flow. His interest in cartoons, comics and other pop culture realms as well as his distinct sampling/production inspired many contemporary artists today.

On December 31, 2020 it was announced on Dumile's Instagram and Facebook by his wife Jasmine, that the rapper had passed away on October 31 of that year at the age of 49. The cause of death was not announced.

After his death, Variety described him as one of the scene's "most celebrated, unpredictable and enigmatic figures". Dumile is considered one of the most celebrated and influential musicians in hip-hop. The English musician Thom Yorke, who collaborated with Dumile on two occasions, wrote: "He was a massive inspiration to so many of us, changed things… For me the way he put words was often shocking in its genius, using stream of consciousness in a way I'd never heard before." Stereogum, reviewing Operation: Doomsday on its 20th anniversary, noted Dumile's "formative" influence on younger rappers. El-P of Run the Jewels described him as a "writer's writer", while Q-Tip called him "your favorite rapper's favorite rapper".