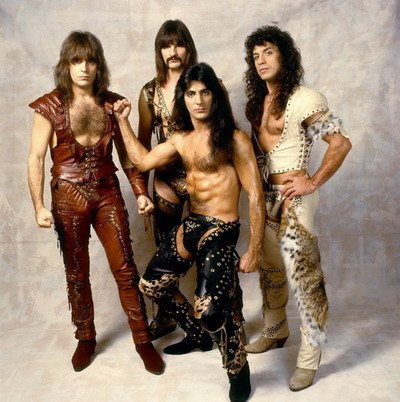 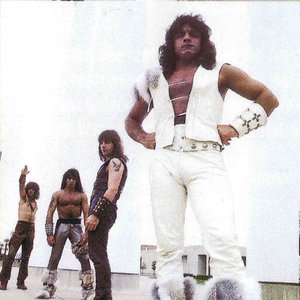 Manowar is an American heavy metal band from Auburn, New York. Formed in 1980, the group is known for lyrics based on fantasy (particularly sword and sorcery) and mythology (particularly Norse mythology and Greco-Roman mythology).

In 1984 the band was included in the Guinness Book of World Records for delivering the loudest performance, a record which they have since broken on 2 occasions. They also hold the world record for the longest heavy metal concert after playing for 5 hours and 1 minute in Bulgaria (at Kavarna Rock Fest) in 2008. They also have been known for their slogan "Death to false metal".

Manowar's history began in 1980 when Joey DeMaio, the future bassist of the band met guitarist Ross the Boss while working as a bass tech and fireworks manager for Black Sabbath on the Heaven and Hell tour. Ross the Boss, a former member of the punk rock band The Dictators, was the guitar player in Black Sabbath's support band, Shakin' Street. The two bonded over their shared musical interests, became friends and decided to form a band with the suggestion and advice of Ronnie James Dio during the tour. At the end of the tour with Black Sabbath, the duo got together to form Manowar. To complete the roster, they hired singer Eric Adams, a former classmate and friend of DeMaio.

After agreeing that they would found a band, the two took in Eric Adams, the "man with lungs of leather", as their vocalist, and Donny Hamzik as their drummer. They released their first album, "Battle Hymns", with this lineup in 1982. On their second release, "Into Glory Ride" (1983), Scott Columbus was introduced as their new drummer, along with his custom made stainless steel drums (regular ones would not endure his aggressive style). The contract for Into Glory Ride was also signed in the band's own blood.

Manowar's third album, Hail to England (1984), started a tour in Great Britain. However, the band were fed up with their current record company's dominant nature, and released yet another record during the same year; "Sign of the Hammer" was published by 10 Records - hence the song "All Men Play on 10" included on this album.

Their next album, "Kings of Metal" (1988), was widely dedicated to the fans of Manowar all around the world, as can be told by looking at the cover (plenty of different flags scattered around). This album also featured recordings with a large male choir, such as "Blood of the Kings" and "The Crown and the Ring (Lament of the Kings)". The title of this album is the reason that their fans (and also themselves) dub them "The Kings of Metal".

Not being pleased by his career with Manowar, Ross the Boss quit the band at this point, and was replaced by David Shankle. Also, the drummer known as "Rhino" took Scott Columbus's place on Manowar's next release, "The Triumph of Steel" published in 1992. After finishing their "Secrets of Steel" tour, they were voted as the band that fans would most like to see in Russia, beating out Beatles and Michael Jackson.

1996 saw the release of "Louder than Hell", with Scott Columbus back in the drums and a new talent, Karl Logan, in lead guitar. This album included hit tracks "Gods Made Heavy Metal", "The Power", "Brothers of Metal (Pt.1)" and "Return of the Warlord".

Manowar has also released six live-DVD's, "Hell on Earth" Parts I-V and "The Day the Earth Shook - The Absolute Power", with the unbelivable event of the 2005 Earthshaker festival. A new EP called "Sons of Odin" was released in October 2006. Their latest album was released at the end of February - beginning of March 2007, entitled "Gods Of War".

Also in 2007 Manowar started their own metalfest in Bad Arolsen, Germany, which is called the Magic Circle Festival.

In August 2008 Manowar released an one-song single, 'Die With Honor'. The song was also edited for the latest "Thunder in the sky" EP, part of "The Asgard Saga" forthcoming CD. The EP included the song "Father" recorded in 15 more languages other than English-another tribute of the band to their faithful fans all around the world.

On July 28, 2013, Manowar announced that they would be re-recording their 1988 release Kings Of Metal with an expected release date of late 2013. Brian Blessed recorded his narration for the track "The Warrior's Prayer" at Circle (Recording) Studios in Birmingham, England. Like the re-recording of Battle Hymns MMXI, this album allowed the band to use modern day technology.

Kings of Metal MMXIV was released through iTunes as a digital download on February 4, 2014. Hard copies of the album were released two weeks later, on February 28.

Manowar started a world tour in support of their Kings of Metal MMXIV album in Chicago, US.

On May 22, 2015 the band announced that they were currently working on a new studio album that was set to be released in early 2016.

On May 25, 2016, Manowar announced that they would retire after almost 40 years of performing. Their last world tour dubbed "The Final Battle" features a new drummer, Marcus Castellani from Brazil.