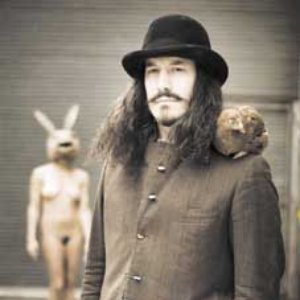 ‘Categories can go hang! Martini has a winning way!’ The Evening Standard, London

Martin Martini doesn’t really trust humans – he prefers animals and chess. ‘I love a game where a horse can eat a bishop. There should be more of that. I love a game where a queen takes pawn. I think all queens should take a bit of pawn. The world would be a much better place if there was just a little more pawn…” His unconventional approach to life mirrors itself in his music. Nobody explained to him that you couldn’t make an orchestra with just a few freakishly talented misfits playing clarinet, trombone, guitar, bass, drums and keys. So in defiance he formed the Bone Palace Orchestra; fusing grooves of jazz, blues, and matchless show-tunes; with good old fashioned rock’n’roll. Bur Martini is uncomfortable with being reduced to such labels: ‘If you tell people you’re gypsy rock, they expect gypsy rock.’ So Martini avoids such expectations and seeks to keep his critics guessing. Indeed, such a reductive term fails to capture the gist of music that makes you want to dance, cry, laugh and yell in equal measures.

Martin Martini & The Bone Palace Orchestra’s second foray into the studio, We’re All Just Monkeys 2008, marks a progression; a real maturity and tightness in their work. Musically they have traded some of their chaos for depth but sacrificed none of their subversion. From a love story between a monkey and a sardine (Monkey and Sardine) to a song that Eddie Perfect has described as the kind of song you’d slow dance to at the wedding of a couple you just know aren’t going to make it (Knife), Martini’s music forces you to really listen rather than just let you take it in passively like a passenger. And like Goerge Orwell, the man he quotes in the liner notes of the album, he refuses to just sit down and shut up. Such an irreverent approach is bound to alienate people. But then, he never did want to waste his life being one of those men that just fitted in. When asked whether his brash, passionate, and at times obnoxious style might offend people, and whether this bothers him, he simply smiles his big serial-killer smile and says: ‘we’re all just monkeys…’

‘There's nothing like Martin Martini out there right now - he is his own genre - and it's about time the rest of the world caught on. A truly frightening genius is at work here.’ Beat Magazine

‘Fat Vaudevillian Rock n Roll….. Expect to be seduced and appalled in equal measure.’ The Age

‘The most original band of this or any era, while they could be from anytime in history one thing is certain. They are not from this dimension. 5 stars.’ Triple J Radio

more info at their myspace