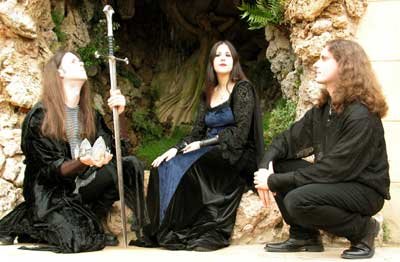 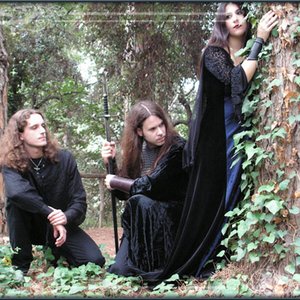 There are multiple bands named Narsilion.

1. The origins of Narsilion date back to 1999, when Sathorys Elenorth started solo project blending traditional medieval fantasy with neoclassical music, inspired by sadness, loneliness and nature. In 2000, Sathorys recorded his first demo called “Lacrima Profundere”, which was soon followed by two others, “Ancient Medieval Times” and “Autumnal Caress”.
Lady Nott then joined the band, who was at that time playing the violin and providing vocals for the band Gotlethe and Nocturn. It was at this time that the band was named Aranmanoth.
In 2002 Aranmanoth merged with Trobar de Morte, Lady Morte’s solo project, and was renamed Ordo Funebris. Ordo Funebris released one demo and two studio albums through Drama Company before disbanding.
In September 2003, Lady Nott and Sathorys Elenorth returned to their former project, and took the name Narsilion, an elven word that means “the song of the moon and the sun”, from Tolkien's "The Silmarillion".

In December 2003 Sathorys (voice, keyboards, percussion and classical guitar) and Lady Nott (voice, violin and recorder) recorded their first demo, "Return To The Silver Forest", at Maxim Sound Studios in Barcelona, Spain. The demo was inspired by "the night’s embrace… beyond those dreams one day made us feel magic in a world filled with deep and enchanted woods… where elves, fairies and other beautiful creatures dance at the sound of unclosed legends, told under the gentle gaze of Mother Earth.."
On March 7th 2004, the band released a demo on their own label “Earendil Records”, receiving enthusiastic reviews from the public and press alike. This demo led to the band being signed by Caustic Records in Vitoria-Gasteiz. The band returned to the studio to record their first full-length album, “Nerbeleth” (an elven word that means “nightfall” or “sunset”).

During the recording “Nerbeleth”, Dark Wind (flutes) joined the band, first as a session player and later as a full time member. In October 2004 “Nerbeleth” was officially released. The album was a critical success nationally and internationally.
Narsilion then toured in support of the album around Spain, sharing bill with such bands as Gor and Morpheus amongst others.

Between August and December 2005, Narsilion returned to the studio, and in May 2006, they released their sophomore album, Arcadia. This album was also well-received by the critics, even receiving 10/10 from Orkut magazine. Arcadia raised the band's profile, allowing them to share the bill with bands like Dark Sanctuary while touring.
In January 2007, Narsilion received an offer from Ars Musica Diffundere/Black Rain Records in Germany to promote their third album and in August 2007, the band entered the studio again to record Namárië. In November, Dark Wind left the band for personal reasons.
Lady Nott and Sathorys have since adapted their songs to accommodate the new line-up.

2. Narsilion was a melodic death metal band from Richmond, Virginia. They released one album called The Hate Lay Hidden in 2002 before breaking up.