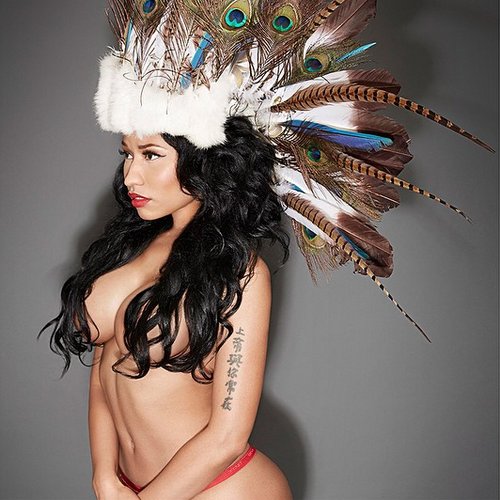 Onika Tanya Maraj, better known by her stage name Nicki Minaj, is a Trinidadian-American, rapper and singer-songwriter signed to a joint venture between Lil Wayne's Young Money Entertainment and Universal Motown. After releasing several mixtapes and building substantial buzz online her debut album, Pink Friday, was released on November 22, 2010. In October 2010, Minaj became the first female to have seven songs simultaneously chart on the Billboard Hot 100.
Minaj has been creating mixtape tracks since 2004 and appeared in XXL magazine. In 2008 she won the Female Artist of the Year award at the Underground Music Awards.
Pink Friday's lead buzz track, Massive Attack, features singer-rapper Sean Garrett and was released on April 13th 2010, peaking at #19 on the Billboard Top Heatseekers Songs chart. Your Love, the album's second single, was released on June 1st following a premature leak. The song peaked at #14 on the Billboard Hot 100 and at #1 on the Rap Songs chart, thus becoming Minaj's most successful single release at the time.
The follow up to Minaj's number one album Pink Friday, Pink Friday: Roman Reloaded also debuted at the top of the charts. The album contained the multi-platinum single Starships. Minaj's latest album The Pinkprint was released in 2014. The single Anaconda peaked at number 2 on the Billboard charts, thus becoming her highest solo single entry to date. She now has 2 #1 songs becoming the first Female Rapper to have 2 consecutive #1 songs and the 2nd Female Rapper to have a #1 debut.
Nicki Minaj has a total of 110 entries on Billboard Hot 100 chart, the most ever for a female artist. She had made history becoming one of the few artists who has 100 or more billboard entries. She won the best female hip-hop artist award at the BET awards every year from 2010 to 2017.
Minaj also holds the most critically acclaimed rap verse ever by a female (Monster).
Minaj has reached 100 million total records sold worldwide, making her the first female rapper to achieve this and making her the 3rd most certified Female Artist in history (As of 7/11/20)
After 4 months of a social media hiatus and 1 year without solo music, Nicki Minaj returned with 2 singles in Spring 2018, "Barbie Tingz" and "Chun-Li". The latter song reached the Top 10 of the Billboard Hot 100, becoming her 16th single to do so. The singles preceded her upcoming 4th studio album “Queen” which was released on August 10th. On August 14th, Nicki Minaj released a new single from her album titled “Barbie Dreams". Listening to her fans, she made “Good Form" a single.
Minaj emerged in the Latin Scene in 2019 with her song Tusa which is a collaboration with Karol G which has spent 6 consecutive months at #1 on the Billboard Argentina Charts thus becoming the longest running #1 on the Billboard Argentina Chart. The song debuted at #1 on the US Hot Latin Songs chart making it the first song with 2 female lead artist to debut on top. The song is 21x Latin Diamond by RIAA in the US making it one of the highest certified latin songs