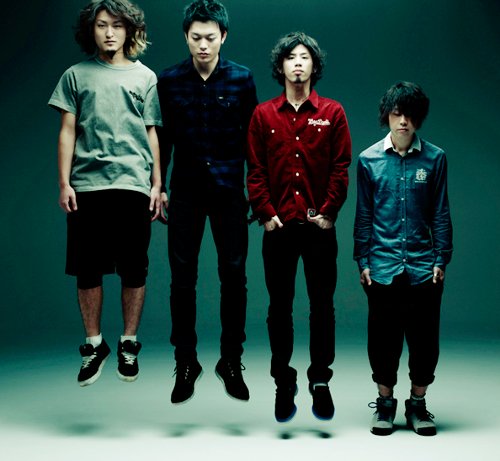 ONE OK ROCK is a Japanese Rock band formed in the summer of 2005. It was started by Toru with High School friends Alex and Ryota after each of them got their musical instruments. After that, Taka joined as their vocalist and they focused on performing shows in the Tokyo area.

In 2006 they independently released 2 mini albums. Because of their albums sales, their participation in relatively large festivals that summer and their energetic shows in the outskirts of Tokyo, they were noticed by a foreign record company.

In March 2007 Tomoya officially joined the group and the band finally made their major debut by releasing their first single 内秘心書(Naihi Shinsho) on April 25th.

The band's name, One Ok Rock, came from "one o'clock," the time that the band used to practice on weekends. However, noticing that the Japanese language made no distinction between r's and l's, they changed "o'clock" to "o'crock" (or "o'krock") which then was separated to become "ok rock".

On April 5th, 2009, Alex was arrested for allegedly groping a female prep school student. They were going to release the single 「Ａｒｏｕｎｄ ザ ｗｏｒｌｄ 少年」on May 6th but this was cancelled. The song was also going to be used for the drama 'God Hand Teru' but was replaced. Also, a nationwide tour was cancelled because of the incident. On May 15th, it was announced the Alex has left the group and the other 4 members would continue activities in the summer without him.

ONE OK ROCK continued as a four-member group and made a comeback with a live concert tour that started on September 5, 2009, titled Overcome Emotion. Their first release afterwards was their fourth single, "Kanzen Kankaku Dreamer", on February 3, 2010. The band followed up with their fourth album, Niche Syndrome, which was released on June 9. Their next single, "Answer is Near", was released on February 16, 2011.

The band released their first double A-side single "Re:make/No Scared" on July 20, 2011, the latter song being the main theme for the Black Rock Shooter: The Game video game. The band's fifth album, Zankyo Reference, was released on October 5, 2011. Their single, "The Beginning", which is used as a theme for the live action movie adaptation of the Rurouni Kenshin manga, was released on August 22, 2012. Their next single Deeper Deeper / Nothing Helps was followed by their 6th full-length album titled Jinsei × Boku = released on March 6, 2013.

Their song Mighty Long Fall from their 9th single was used as the theme song for the second movie adaption of the Rurouni Kenshin manga titled Rurouni Kenshin: Kyoto Inferno. The bands 7th album, 35xxxv was released in Japan on February 11, 2015. Later in 2015 the band signed with Warner Bros. Records in America and released their debut album in the US, 35xxxv (Deluxe Edition), an all-English album.