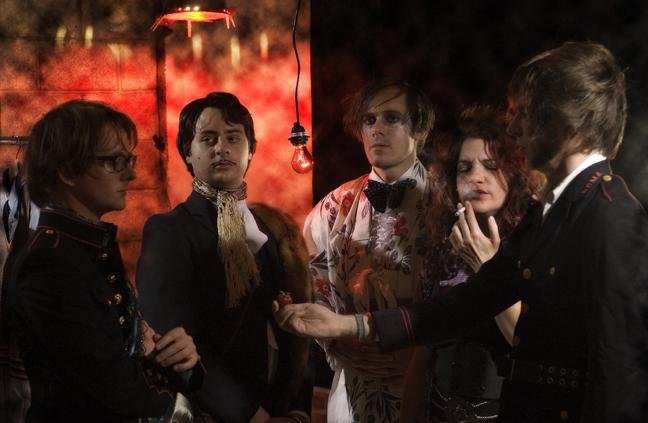 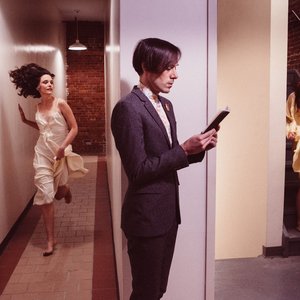 of Montreal is an indie pop band which formed in Athens, Georgia, United States in 1997. The band is fronted by Kevin Barnes, who writes, composes, and plays most of the music for his albums.

They were among the second wave of groups to emerge from The Elephant 6 Recording Company and the group has a style that is typical of many Elephant 6 bands due to their interest in combining musical experimentation with the basic tenets of pop i.e. catchy melodies and sing-along choruses. The band’s style has been influenced by conventional indie pop, psychedelic music, vaudeville and music hall on their earlier releases and by afrobeat, funk, krautrock and reggae on their recent releases.

The band’s style has been known to change between albums. At first, the band embraced a more simple, quirky, lo-fi indie pop sound, which occasionally bordered on twee pop. The band was created by Kevin Barnes and named after a failed romance with a woman from Montreal, though the story changes in various interviews. Barnes was the only member of the “group” prior to his relocation to Athens, Georgia. There, he met Derek Almstead, later of Circulatory System, M Coast, Elf Power etc., and Bryan Poole, who also performs as The Late B.P. Helium.

This album marked that the band had moved to a fuller sound, which is also found on its follow-up, Coquelicot Asleep in the Poppies: A Variety of Whimsical Verse. These two albums contain more narrative lyrics, as opposed to the rather personal lyrical matter of those preceding it, and often imitating the style of old 1950s radio plays.

After production on The Gay Parade began in 1998, Poole left the band to focus on his duties with Elf Power, another Elephant Six band from Athens. Barnes also recruited Jamey Huggins and Dottie Alexander, who had been performing together as Lightning Bug vs. Firefly, to play various instruments. Derek moved from drums to bass. The band was joined soon after by Marshmallow Coast’s Andy Gonzales.

Following the release of The Gay Parade, the band signed with Kindercore Records, who would release a number of singles and compilations. It wasn’t until 2001 that Coquelicot Asleep in the Poppies: A Variety of Whimsical Verse would be released as a new album with original material. The album again featured contributions from across the Elephant 6 spectrum.

In 2002, Aldhils Arboretum was released, with a slightly different sound than its predecessors, as the songs were more directly structured. This album marks the beginning of the change in of Montreal’s sound, with more danceable rhythms than ever before, especially on the album’s closer, “Death Dance Of The Omipapas and Sons For You”. A successful tour ensued, including of Montreal’s first trip to the UK, along with a tour-only EP.

Kindercore Records would fold shortly after the release of Arboretum, and of Montreal’s status was also threatened. Kevin got married, and Andy and Derek left the band. Barnes, being uncomfortable with the unrest, as well as some divisions within the band, took to writing and performing their 2004 album Satanic Panic in the Attic mostly by himself. Released by Polyvinyl Records, it became one of their more successful efforts to that point. The 2004 tour saw The Late B.P. Helium (Bryan Poole) rejoin the band, with some bass played by Kevin’s partner Nina Barnes. The album marked a shift to something more electronic with traditional structures, to be further advanced in later albums and new songs. In their most recent releases and concerts, the band has fully embraced a sort of techno-pop glam image, with little of their previous incarnations surfacing. This style is featured in singles such as Disconnect the Dots. The style would continue to evolve into 2005’s The Sunlandic Twins, which was even more a Barnes solo effort. Recorded in Athens, with the exception of one track recorded in Norway, it was a much more pronounced electronic album. The album became a success, mostly due to the singles “So Begins Our Alabee” and the MTV clip for “Wraith Pinned to the Mist (and Other Games)”.

The band released several collections of singles in early 2006. Barnes recorded most of the band’s 2007 release, Hissing Fauna, Are You The Destroyer?, by himself while living in Norway and Athens, Georgia. The switch to autobiographical themes of suicide, depression and isolation of the album was a direct product of his troubled personal life during that period.

of Montreal released Skeletal Lamping on October 21, 2008 followed by False Priest on September 14, 2010, Paralytic Stalks on February 7, 2012, and Lousy with Sylvianbriar on October 8, 2013. Aureate Gloom is scheduled for release by Polyvinyl Records on March 3, 2015.

Lyrically, their style has changed dramatically throughout the years. In the beginning, many songs were narratives of personal or humorous situations, such as “Tim, I Wish You Were Born A Girl”, from Cherry Peel. This style, however, changed with The Gay Parade, where many songs involve small narratives surrounding invented characters (in songs such as “Jacques Lamure”, “The Autobiographical Grandpa”, “Mimi Merlot” and “Rose Robert”). Others act as extracts from fictional conversations (“Advice From a Divorced Gentleman to His Bachelor Friend Considering Marriage” and “Good Morning Mr. Edminton” as examples). With Aldhils Arboretum came a slight return to the previous writing style, except following more poppy, classical lyrical structures (such as the use of choruses, which are generally absent in the Gay Parade/Coquelicot years). This style continued throughout Satanic Panic and The Sunlandic Twins to some extent. On the album Hissing Fauna: Are You The Destroyer? the lyrics are much more personal than previously used, with songs detailing emotions within the speaker.

Another unique quality of the band is the fusion of ostensibly gloomy lyrics with bouncy, upbeat melodies and hooks. On Aldhils Arboretum, for example, the lyrics for tracks like “Doing Nothing” and “Old People in the Cemetery” focus on apathy, loneliness or death while being contrasted with cheerful instrumentation. Another example of this tendency is shown in their choice of covers; for example, Yoko Ono’s “I Felt Like Smashing my Head Through a Clear Glass Window” from The Bird Who Continues to Eat the Rabbit’s Flower.

True to the style of most Elephant 6 recording artists, of Montreal’s members have been in a variety of side projects and other bands:
The band itself has performed as the backing band for Marshmallow Coast on record and on tour.

My First Keyboard was the pseudonym used by Dottie Alexander to release the song “The You I Created” on the Kindercore singles club. of Montreal acted as her backing band.

Top Tracks
1) Gronlandic Edit
2) Wraith Pinned To The Mist And Other Games
3) Suffer For Fashion
4) The Past Is A Grotesque Animal
5) Heimdalsgate Like A Promethean Curse
6) Sink The Seine
7) Cato As A Pun
8) A Sentence Of Sorts In Kongsvinger
9) Bunny Ain't No Kind Of Rider
10) Disconnect the Dots
11) Lysergic Bliss
12) Faberge Falls For Shuggie
13) We Were Born the Mutants Again With Leafling
14) Labyrinthian Pomp
15) The Party's Crashing Us
16) Requiem for O.M.M.2
17) Rapture Rapes the Muses
18) Gallery Piece
19) Oslo In The Summertime
20) Forecast Fascist Future
21) I Was Never Young
22) So Begins Our Alabee
23) She's a Rejector
24) Id Engager
25) For Our Elegant Caste