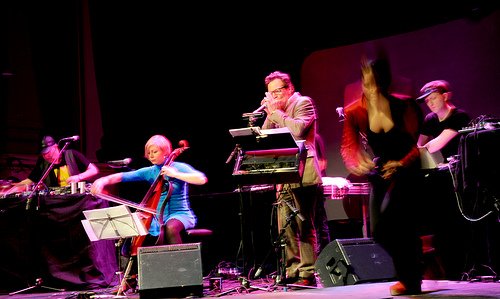 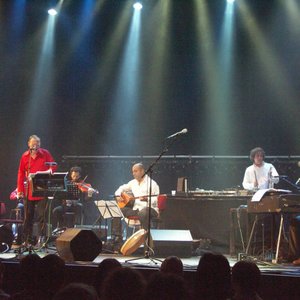 The computer group POW ensemble was founded in 2001 by Dutch composer/saxophonist Luc Houtkamp, with the aim of exploring and expanding the musical potential of the computer. Computer music is often thought of as incomprehensible sounds that nobody can understand, apart from some isolated nerds. A concert by the POW ensemble is something completely different, however: here, real music is being made! The musicians use improvisation, live processing, electronic and acoustic instruments such as oud and saxophones. The POW ensemble can be regarded as the chamber ensemble of the 21st century, using computers as musical instruments.

Due to its specific character, computer music often finds itself in a rather isolated world, where the listener gets the feeling that very specific but totally incomprehensible musical rules are followed. The POW ensemble opens up this isolated universe and places the computer music in the centre of the musical world. The musicians enter into a dialogue with, and comment on, certain musical forms and styles, without denying the specific possibilities of computer music. Electronic or computer music is not another style in itself, but has the potency to move between different styles and musical traditions, and cross many boundaries. It is self-evident that improvisation is an important factor in the groups musical concept.

By making use of self-written software, a completely unique sound and identity are created. In addition, the use of the computer in improvised music offers great opportunities to create new and highly complex forms of interaction. By connecting computers to interactive networks, frameworks can be created in which not only the musicians but also their instruments react to and interact with each other. This way, the POW ensemble represents a new, unique force in electronic music.

The above mentioned approach is separately developed within a workshop-type structure, called POWlab. In this experimental environment, aimed at the development and research of computer music, new ideas on the use of computers as musical instruments are developed, tested, and accepted or rejected. Some of these ideas are taken into production in new concert programmes of POW Ensemble, others never get further than the laboratory. Some examples of ideas which are being developed in the POWlab setting: networks of computers; the direction of computers by tap dance; the development of the Kleef (glue) principle. The results of the POWlab are shown during presentations, and can be consulted as papers or musical works. The POWlab is structurally subsidised by the Ministery of Education, Culture and Sciences.

The POW ensemble has initiated several very successful boundary-crossing programmes, such as a programme around the blues (The Thirteen Bar Blues), the oud (Maqamat), with improvisors (Teaming Up!) and with a tapdancer (Tap Hop). It has further organised concerts on computer and electronic music in the fall of 2004 (Digital Sound Force) and 2005 (POW Connect). Since 2005 the ensemble has been touring with a new programme, called Songs, Dances & Riddles in which blues and jazz elements, as well as tap dance, are integrated in a new concept. In 2006, POW ensemble has developed a new project with NVL, the Nederlands Vocaal Laboratorium.

The POW ensemble has a pool of computer players and other musicians, from which groups are formed for the various programmes.

Luc Houtkamp (1953) is a composer/saxophonist who bridges the gap between the worlds of jazz-derived free improvisation and computer-based composition and performance. One aspect that particularly typifies his playing is a strong understanding of form and structure that give the impression that his improvised music is a completely composed one. He has been working equally in electronics and on the saxophone for years, and his development as a player has been accompanied by an interest in electronic textures. As a composer of electronic music he writes software which enables interactive improvisations. By establishing his own POW ensemble in 2001, Houtkamp has expanded the approach which he developed as a soloist to group concepts. On March 233 2005 he has received the prestigious VPRO/Boy Edgar Award 2004. For more information on artistic leader Luc Houtkamp, see his Myspace page: http://www.myspace.com/luchoutkamp