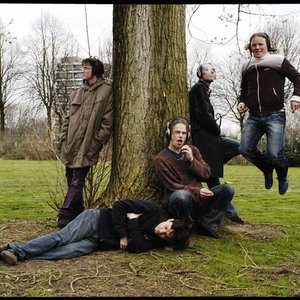 During spring 2001, singer/guitarist/lyricist René de Wilde decides to move from the Dutch capitol Amsterdam to the even more rural eastern part of the country. In retrospect, this turned out to be a first essential step in the coming about of Parkside. Having to resign his job as a business economist (due to episodes of slight mental instability), René decides to now devote all his time to writing and performing music. Besides an obscure talent for making his guitar sound like Erik Satie on mescaline, he is gifted with a voice that draws from a colourful emotional pallet, being able to elicit goose bumps as well as a chronic migraine. Soon after setting in his new residence, René is introduced to digitalist Bram van den Oever (aka Gluid), who after years of exercising vocal pyrotechnics in the ranks of several Dutch acts, appears to have a rather morbid fascination with the mutilation of soundchunks. Having cut-copy-paste written all over him, he masters the fine art of turning purring cats into drumkits, and buzzing refrigerators into the London Symphony Orchestra. And vice versa! Aware of the fact that a third psychic would result in a small scale mental institution rather than a musical collaboration, Bram and René decided to recruit multi-instrumentalist Rob den Otter and turn Parkside into a three-piece company.

With an academic degree in experimental psychology (which indeed comes in handy given the bands overall mental condition), and currently working hard on his PhD thesis, Rob adds just that little bit of scientific rationality to balance out the craziness of his two fellow musicians. The first couple of years of this peculiar musical collaboration were spent in Brams attic, establishing a debut-ep (Painting a mushroom, November 2001), and a first full-length album (Energy/Trouble, February 2003), which got embraced by some of Dutch finest critics: -(OOR) Parkside evokes exiting atmospheres through delightful sounds that are prominently placed without disturbing the songs. Extremely well-done! Think of Radioheads Kid a, but with a little more song to hold on to. -(FRET) An unbalanced, but at times sensational, often emotional, comical and above all kaleidoscopical sound-experience. Odd at least, maybe brilliant. - Not only the critics, but also a slowly erecting army of lovers made the intractable trio decide to make their music fit for stage exhibition. This is where the Schreuders Brothers come in. Dirk, the elder, plays the bass with a gruesome energy that ends eternity. Mark, guess what, is a groovy drummer with a flow that cannot be found in the medical encyclopaedia. At present, Parkside is working on their second album and looking for serious collaboration with a record company. They are also building up an ossifying live-reputation rapidly.