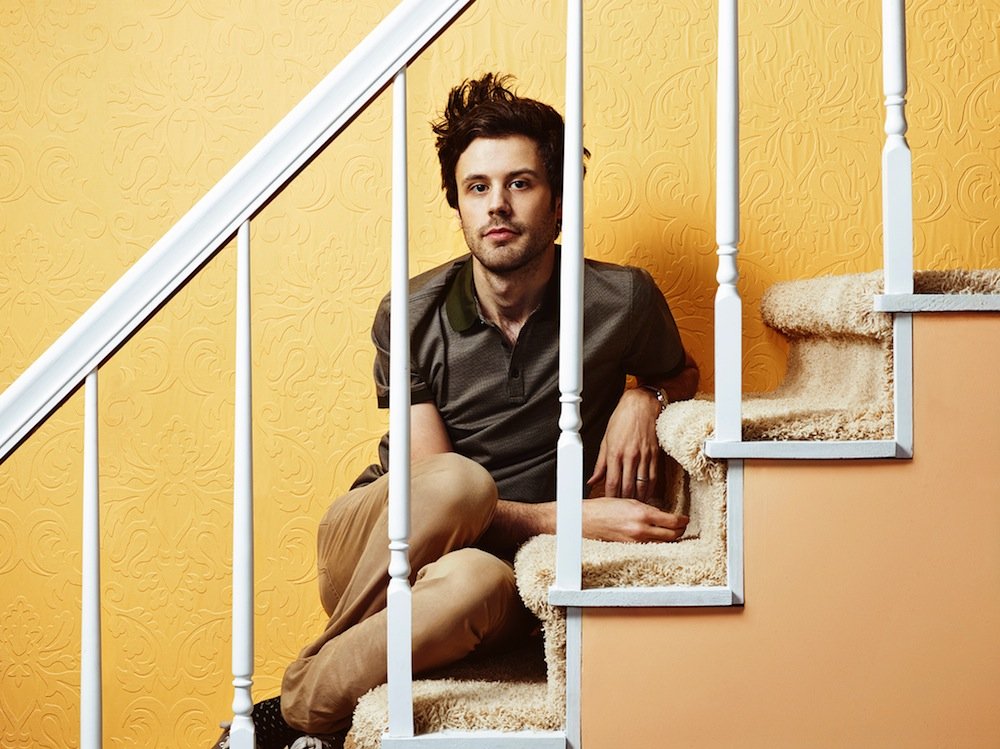 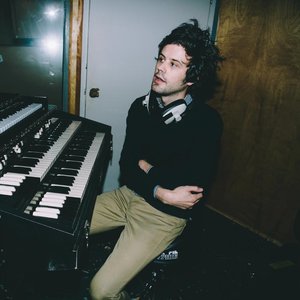 "Passion Pit" was a vocabulary word used in a class Michael took in school. The band called their name from the Variety Slanguage Dictionary, a glossary of Variety's frequently-used slang, which was provided by the Hollywood Insider publication to help not-so-savvy readers decipher its content. The magazine used the term to refer to drive-in theatres, because of their privacy and romantic allure for teenagers.

The first Passion Pit songs, which would later become the Chunk of Change EP, were written by Angelakos at Emerson College as a belated Valentine's Day gift to his then-girlfriend. At first, he wrote and performed all his material alone using a laptop. These sets of songs were passed around Emerson and caught the attention of many blogs.

Michael played his first shows alone sitting with his laptop and a microphone. After one of these solo shows in the Boston area, Ian Hultquist, who was attending Berklee at the time, approached Angelakos and expressed interest in creating and playing music collaboratively. After a few line-up changes, Passion Pit was born. They formed a group that consisted of Angelakos, Hultquist, Ayad Al Adhamy, Thom Plasse (bass), and Adam Lavinsky (drums). The band spent a considerable amount of time trying to flesh out a collaborative format and structure that would work best for them. Jeff Apruzzese and Nate Donmoyer joined the band shortly after they signed to Frenchkiss in 2008, replacing Plasse and Lavinsky, respectively. In 2012, Adhamy was replaced by Xander Singh.

The band's debut EP, "Chunk of Change", was released on September 16, 2008. The first four tracks were those that Angelakos had written as a gift for his girlfriend, which had already become popular throughout Emerson where he had been passing out his own, self-produced copies. Two tracks, "Better Things" and "Sleepyhead", were added for the commercial release of the EP. The same year of their debut EP's release, the band was chosen as "Best New Local Act in 2008" in the WFNX/Boston Phoenix best music poll.

The first and only single to be released from the EP, "Sleepyhead", received a good deal of exposure through its use in numerous media campaigns and advertisements, while the video for the song, directed by The Wilderness, was included on Pitchfork's Top 40 Music Videos of 2008 list. The song contains samples of "Óró Mo Bháidín" by Irish singer and harpist Mary O'Hara.

Other songs from the EP received some exposure as well. "Cuddle Fuddle" was featured in E4's second series of The Inbetweeners and "I've Got Your Number" was used in an advertisement for the cash card from O2, Money in the UK.

The band's first full-length studio album, Manners, was released on May 18, 2009 in the UK and May 19, 2009 in the United States and Canada. In celebration, the band played their record release party on the 18th in New York City on a Rocks Off boat cruise. In a preview article, ClashMusic.com commented that the album "has every chance to rank as one of the year's best" and that "it reveals additional nuances with each visit: a sure-fire sign of an album with true longevity".

In order to obtain a specific background vocal accompaniment the band was looking for on Manners, Passion Pit enlisted the help of the PS22 chorus, who recorded vocals in-studio for three of the album's songs: "The Reeling", "Little Secrets", and "Let Your Love Grow Tall".

Passion Pit made their television debut on Late Night with Jimmy Fallon on Wednesday, July 29th, 2009 performing their song "The Reeling" from the album.

"The Reeling" was the first single to be released from the album and found success on the Billboard Alternative Songs chart in the fall of 2009, where it peaked at number 34 in October. "Little Secrets" was the third single to be released and had success on the chart as well, topping out at number 39. "Let Your Love Grow Tall" was never released as a single but had some exposure being used in the sixteenth episode of the fourth season of the TV series Ugly Betty.

The album's second single, "To Kingdom Come", was used in the Rhapsody commercial for its iPhone application.

"Sleepyhead" was the only track from Chunk of Change to be included on the album and was made available from iTunes for free as a discovery download in 2009. The song continued to receive additional exposure through its appearances in advertisements. It was used in a season 3 episode of the teen-drama, Skins, and most recently in the debut trailer for LittleBigPlanet 2, which led to the band's increased popularity amongst fans and players of the game, who eventually created an in-game instrumental version of the song to listen to in the first game. When the sequel was released, it came with the song's actual instrumental version used in the trailer. This song has also been used in an advertisement for the Palm Pixi and the Canadian PSP.

The song "Moth's Wings" was used in the fourth episode of the third season of the CW teen drama Gossip Girl and in the closing credits of episode 36 of HBO's Big Love. It appeared in the FIFA 10 video game and was featured in the film Life As We Know It, starring Katherine Heigl and Josh Duhamel. Additionally, the track has been used as a background theme for Sky Sports' coverage of the UEFA Champions League and as the music for a dance routine in Episode 5, Season 8, of the US television show So You Think You Can Dance (United States), which received a standing ovation from the show's judges. It was also featured in MTV's show Awkward.

On April 13, 2010, the band reissued Manners in a deluxe edition format which contained new artwork and three additional tracks: stripped-down versions of "Sleepyhead" and "Moth's Wings" and a cover of The Cranberries' song "Dreams". The deluxe release coincided with the extension of their North American headlining tour.

The band released another cover in June 2010, this time offering up their take on The Smashing Pumpkins hit song "Tonight, Tonight" as part of a promotion with Levi's called "Pioneer Sessions".
In September 2010, Passion Pit toured with the English band Muse as their opening act for eight shows during their fall tour through parts of the U.S.

In an August 2010 interview with NME, Angelakos stated that work had already begun on the follow-up to Manners and that the band intended to release the album in the spring of 2011. He then said that it will be released early in 2012.

On May 7, the first track from Gossamer was released, called "Take a Walk".

On June 12, the second track from Gossamer was released, called "I'll Be Alright". The track leaked early on June 11th and was released as an NME premiere on June 8.

On July 9, a third track from Gossamer, called "Constant Conversations", was reviewed and featured as "best new track" by Pitchfork. It was released with the review as streamed content.

On July 16th, Angelakos posted on the Passion Pit website that the band has cancelled the remaining July tour dates and suspended the tour in order for Angelakos to seek ongoing treatment for bipolar disorder. A Rolling Stones interview stated that Angelakos was diagnosed at 17, undergoing therapy, hospital care, and medication ever since.

On October 13, they performed on Saturday Night Live. They played "Take a Walk" and "Carried Away".

On September 24, Passion Pit released the Constant Conversations EP, exclusively available on Spotify. The EP featured an alternative version of Constant Conversations from their 2012 album Gossamer, in addition to a formerly unreleased b-side called Ruin Your Day. The final track on the EP was a remix of Carried Away by Dillon Francis.

Passion Pit's third studio album, Kindred, was released on April 17, 2015, preceded by the lead singles "Lifted Up (1985)", "Where the Sky Hangs", and "Until We Can't (Let's Go)". In anticipation of the release, the band posted several coded images to various social networking platforms. Soon after the release of the Morse code image, the official Passion Pit website, which had been under construction since the end of the 2013 tour, came back up as "KindredTheAlbum.com" (The website has since returned to "passionpitmusic.com".)

During February and March of 2017, several new Passion Pit songs were uploaded on YouTube on the account for The Wishart Group (from the name of a project started by Michael Angelakos and dedicated to supporting musicians by providing them with legal, educational and healthcare services, with a focus on mental health, a topic on which Angelakos has been especially forthcoming), foreshadowing a fourth album for 2017.

All of the videos for those new songs have the same background photo (a woman wearing a white dress, located in the middle of the sea, turning around as though she had sensed she was being secretly observed from behind), as does the front cover of the album. The songs were taken down, but Angelakos announced that he will give a downloadable copy of the album for free to anyone who retweets neuroscientist Michael F. Wells' tweet on the importance of science and research. The profits from the album will be donated to a psychiatric research institution in Cambridge, Massachusetts.

On July 11, Passion Pit's fourth album, Tremendous Sea of Love, was announced to be released on July 28 on all streaming services.

The band embarked on a North American tour between January and February 2018 to promote Tremendous Sea of Love as well as their EP Chunk of Change's 10th anniversary.