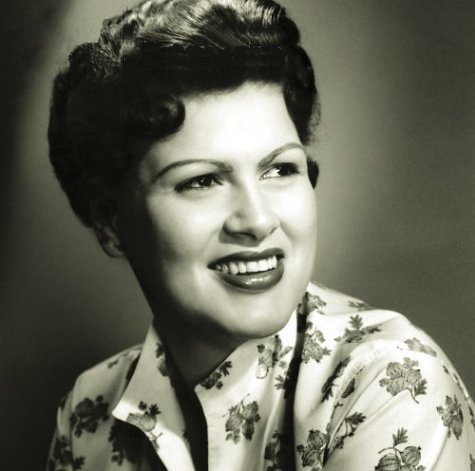 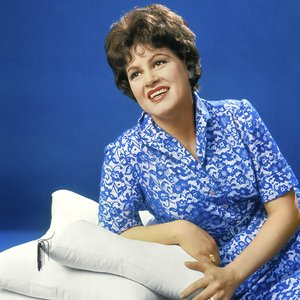 Patsy Cline (born Virginia Patterson Hensley; September 8, 1932 – March 5, 1963) was an American singer. She is considered one of the most influential vocalists of the 20th century and was one of the first country music artists to successfully cross over into pop music. Cline had several major hits during her eight-year recording career, including two number-one hits on the Billboard Hot Country and Western Sides chart.

Cline's first professional performances began at the local WINC radio station when she was fifteen. In the early 1950s, Cline began appearing in a local band led by performer Bill Peer. Various local appearances led to featured performances on Connie B. Gay's Town and Country television broadcasts. It also led to the signing of her first recording contract with the Four Star label in 1954. She had minor success with her earliest Four Star singles including "A Church, A Courtroom and Goodbye" (1955) and "I've Loved and Lost Again" (1956). In 1957 however, Cline made her first national television appearance on Arthur Godfrey's Talent Scouts. After performing "Walkin' After Midnight", the single would become her first major hit on both the country and pop charts.

Cline's further singles with Four Star Records were unsuccessful, although she continued performing and recording. After marrying in 1957 and giving birth in 1958, she moved to Nashville, Tennessee, to further her career. Working with new manager Randy Hughes, Cline would become a member of the Grand Ole Opry and then move to Decca Records in 1960. Under the direction of producer Owen Bradley, her musical sound shifted and she achieved consistent success. The 1961 single "I Fall to Pieces" would become her first to top the Billboard country chart. As the song became a hit, Cline was severely injured in an automobile accident, which caused her to spend a month in the hospital. After recovering, her next single release "Crazy" would also become a major hit.

Between 1962 and 1963, Cline had hits with "She's Got You", "When I Get Through with You", "So Wrong" and "Leavin' on Your Mind". She also toured and headlined shows with more frequency. In March 1963, Cline appeared at a benefit show in Kansas City, Kansas. To return home, she boarded a plane along with country performers Cowboy Copas, Hawkshaw Hawkins and manager Randy Hughes. Upon hitting rough weather, the plane crashed outside of Camden, Tennessee, killing all those on board.

Since her death, Cline has been cited as one of the most celebrated, respected and influential performers of the 20th century. Her music has influenced performers of various styles and genres. She has also been seen as a forerunner for women in country music, being among the first to sell records and headline concerts. In 1973, she became the first female performer to be inducted into the Country Music Hall of Fame. In the 1980s, Cline's posthumous successes continued in the mass media. She was portrayed twice in major motion pictures, including the 1985 biopic Sweet Dreams starring Jessica Lange. Several documentaries and stage shows were released during this time, including the 1988 musical Always…Patsy Cline. A 1991 box set of her recordings was issued that received critical acclaim. Her greatest hits album sold over 10 million copies in 2005. In 2011, Cline's childhood home was restored as a museum for visitors and fans to tour.

Cline has been cited in both country and pop music as of one of the greatest vocalists of all-time. Her voice has also been called "haunting", "powerful", and "emotional". Cline's emotional expression and delivery of lyrics helped influence various musical genres and artists. With the support of producer Owen Bradley, Cline has been said to "help define" the Nashville Sound style of country music. While the subgenre has received mixed opinions, it has also been said to be a significant part of country music's "authenticity", with Cline being the center focal point of the subgenre. Other artists have noted her impact, including LeAnn Rimes who stated, "I remember my dad telling me to listen to the way she told a story… I remember feeling more emotion when she sang than anyone else I had ever heard." Lucinda Williams commented on Cline's vocal talent in helping define her legacy, stating, "Even though her style is considered country, her delivery is more like a classic pop singer… That's what set her apart from Loretta Lynn or Tammy Wynette. You'd almost think she was classically trained."

Cline has been a major influence on various music artists including Reba McEntire, Loretta Lynn, LeAnn Rimes, k.d. lang, Linda Ronstadt, Trisha Yearwood, Sara Evans, Dottie West, Kacey Musgraves, Margo Price, Cyndi Lauper, Trixie Mattel and Brandi Carlile. Dottie West (also a close friend of Cline's) spoke about her influence on her own career, "I think I was most influenced by Patsy Cline, she said things for people. There was so much feeling in there. In fact, she told me, 'Hoss, if you can't do it with feeling, don't'". In 2019, Sara Evans discussed how Cline has been an influence since she was a young girl, "I learned everything I could learn about her. I tried to mimic her singing to the ‘t’. We grew up singing in bars — my brothers, sisters and I — from the time I was really little. So I started covering every Patsy Cline song. Then when I first got my record deal I came to Winchester to visit a radio station to try to get them to play my song “Three Chords and the Truth."

In 1973, Cline was inducted into the Country Music Hall of Fame. With the induction, she became the first solo female artist to be included. In 1977, Cline's friend and mentee Loretta Lynn released a tribute album entitled I Remember Patsy. The record contained covers of Cline's songs, including "Back in Baby's Arms" and "Crazy". The album's lead single was "She's Got You", which would reach the number 1 spot on the Billboard country chart in 1977. In 1995, Cline received a Grammy Lifetime Achievement Award for her legacy and career. Additionally, her hits "I Fall to Pieces" and "Crazy" received inductions into the Grammy Hall of Fame.

In 1993, Cline was included on United States postal stamps as part of their "Legends" series. Other country artists that were included on stamp series were The Carter Family, Hank Williams, and Bob Wills. The stamps were dedicated in an official ceremony at the Grand Ole Opry by Postmaster General Marvin Runyon. In August 1999, Cline received a star on the Hollywood Walk of Fame. The ceremony was attended by her widower Charlie Dick and daughter Julie Fudge. During the 1990s, two of her songs were voted among the "Greatest Juke Box Hits of All-Time". "Crazy" was voted as the number 1 greatest, along with "I Fall to Pieces" ranking at number 17.

Forty years after her death, MCA Nashville released a tribute album entitled Remembering Patsy Cline (2003). A television special also followed around the same time. The album consisted of cover versions of songs taken from Cline's 1967 greatest hits album. It included songs covered by country artists such as Terri Clark and Martina McBride. It also featured artists from other genres such as Michelle Branch, Diana Krall and Patti Griffin.

Cline's hometown of Winchester, Virginia has helped honor her legacy and career. In 1987, the local government approved the placing of markers within the town denoting it as the birthplace of Cline. The same year, a bell tower was erected in her burial location at Shenandoah Memorial Park. The bell tower cost thirty five thousand dollars and was partially funded by Cline's friends Jan Howard and Loretta Lynn. In 2005, Cline's childhood home was given an official on-site marker and included on the National Register of Historic Places. With the development of an organization entitled Celebrating Patsy Cline Inc., renovations began on Cline's childhood home. In August 2011, the Patsy Cline House officially opened as a historic home for tours. In almost three months, about three thousand people visited the home. The home was restored to the era in which Cline lived in it during the 1950s with her mother and siblings. Replicas of furniture and stage clothes are also included. Daughter Julie Fudge spoke of the house in 2011, stating, “I think when you go into the house, you will kind of feel like this is a snapshot of what it would have been like to visit when Mom lived there.”

In 2017, the Patsy Cline Museum opened in Nashville, Tennessee, located at 119 3rd Ave. S., on the second floor in the same building as the Johnny Cash Museum. The museum includes Cline's actual stage costumes, as well as her original scrapbook and record albums. The Patsy Cline Museum features other artifacts, such as the soda fountain machine from Gaunt's Drug Store, where Cline worked as a teenager. Original letters that Cline wrote to friends are also included as part of the museum.