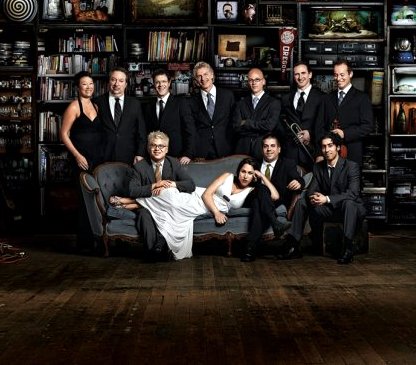 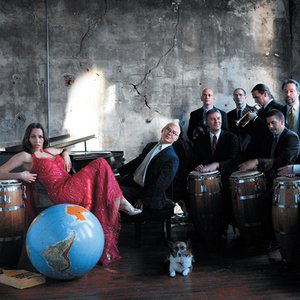 Pink Martini is a 13-member "little orchestra" from Portland, Oregon, formed in 1994 by pianist Thomas Lauderdale. They draw inspiration from music from all over the world – crossing genres of classical, jazz and old-fashioned pop.

Pink Martini has twelve instrumentalists (and sometimes travels with string sections), and performs its multilingual repertoire on concert stages and with symphony orchestras throughout Europe, Asia, the Middle East, Northern Africa, Australia and New Zealand and North America. Pink Martini made its European debut at the Cannes Film Festival in 1997 and its orchestral debut with the Oregon Symphony in 1998 under the direction of Norman Leyden. Since then, the band has gone on to play with over 30 orchestras around the world, including multiple engagements with the Los Angeles Philharmonic at the Hollywood Bowl, the Boston Pops, the National Symphony at the Kennedy Center and the BBC Concert Orchestra in London. Other appearances include the grand opening of the Los Angeles Philharmonic’s new Frank Gehry-designed Walt Disney Concert Hall, with return sold-out engagements for New Year’s Eve 2003, 2004 & 2008; two sold-out concerts at Carnegie Hall; the opening party of the remodeled Museum of Modern Art in NYC; the Governor’s Ball at the 80th Annual Academy Awards in 2008; and the opening of the 2008 Sydney Festival in Australia.

Lauderdale met China Forbes, Pink Martini’s lead vocalist, at Harvard. He was studying history and literature while she was studying English literature and painting. Late at night, they would break into the lower common room in their college dormitory and sing arias by Puccini and Verdi – and the occasional campy Barbra Streisand cover –thus sealing their creative collaboration. Three years after graduating, Lauderdale called Forbes who was living in New York City, where she’d been writing songs and playing guitar in her own folk-rock project, and asked her to join Pink Martini. They began to write songs together for the band. Their first song “Sympathique”– with the chorus “Je ne veux pas travailler” (”I don’t want to work”) – became an overnight sensation in France, and was even nominated for “Song of the Year” at France’s Victoires de la Musique Awards. Forbes, though fluent only in English, sings in 15 different languages.

Pink Martini’s debut album Sympathique was released independently in 1997 on the band’s own label Heinz Records (named after Lauderdale’s dog), and quickly became an international phenomenon, garnering the group nominations for “Song of the Year” and “Best New Artist” in France’s Victoires de la Musique Awards in 2000.

In October 2004, the group released its second album, Hang on Little Tomato.

On New Year's Eve 2005, Pink Martini performed live at the Arlene Schnitzer Concert Hall in Portland, Oregon. This performance was aired live on National Public Radio's Toast of the Nation, and in partnership with Oregon Public Broadcasting was recorded for a live DVD and later broadcast on US public broadcasting and French television. The DVD has been rereleased to retail as Discover the World: Live in Concert, featuring not only the full concert, but several vignettes and a short documentary of the band's history.

In May 2009, the band recorded three concerts with the Oregon Symphony under the direction of Carlos Kalmar for the band’s fifth album … a symphonic record which is slated for a 2011 release.

Pink Martini songs appear in such films as In the Cut, Nurse Betty, Josie and the Pussycats, Tortilla Soup, Shanghai Kiss, Mary and Max, and Mr. & Mrs. Smith and have been used on television shows such as Dead Like Me, The Sopranos and The West Wing, among others. Their song "Una notte a Napoli" is an integral part of the Italian movie Mine Vaganti (2010), by the Italian-Turkish director Ferzan Özpetek. The song "No Hay Problema" is included as background/setup music for Microsoft's Windows Server 2003 and was also used as the background/setup music for an early build of Windows Longhorn, now known as Windows Vista.
In February 2011, the group's lead singer, China Forbes, recorded a video greeting to the European Space Agency's Italian astronaut, Paolo Nespoli, and Russian cosmonaut Aleksandr Kaleri, on board the International Space Station. The astronauts were preparing to oversee the docking of ESA's Automated Transfer Vehicle (ATV) cargo vessel, Johannes Kepler, which took place at 17:08 CET on 24 February. The greeting was set to the sound track of Dosvedanya Mio Bombino - one of Pink Martini's signature songs - and was mixed with footage of the actual docking.

In November 2011, they played at the Balboa Theater with the Bonita Vista High School band, Club Blue.