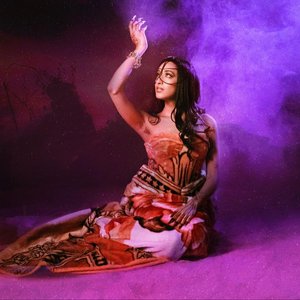 There are multiple artists with the name Raveena:

Aurora was born in Massachusetts and grew up in both Queens, New York and Stamford, Connecticut. Her parents immigrated to Queens from India, after the 1984 anti-Sikh riots. She was raised in a traditional Sikh household. She became exposed to R&B, Soul, Jazz and Folk music in middle school, which piqued her interest in music and influenced her musical style later in life.

2) Born on 18 May 1997 in Antwerp, Belgium as a British citizen of Indian origin to parents, Dimple and Rajiv Mehta. Raveena is an elder sister to sister Kareena and brother Rajveer. Her last.fm user name is RaveenaMusic.

As a child, Raveena showed fascinating interest in music and arts. She developed artistic skills at an early age and grew fond of music and instruments. At the age of 5 years, her exposure to music was formalized through her school and by Piano lessons. Her initial performances were made at school and community talent shows.

Later, she started formal dance and singing lessons through coach Suchita Parte, whose recording "Designer Bliss” is one of the best selling Indian albums of all time. Through encouragement from her family and uncle Vishal, she started recording her first album “From Deep Within” at Earth Studios in Mumbai (India). Tushar Parte, husband and composer of Suchita’s successful release, was in charge of the compositions.

The result was a wonderful collection of songs full of love, hope and happiness, masterfully combining the deepest, most beautiful melodies, all of which will soon be in your hands. MR. DJ, the song presented here as Raveena’s debut single, recorded when she was 11, not only contains one of the most rocking tunes you’ve ever heard; it’s also an extremely powerful and emotional song that you’ll never get tired to listen to. So here she is. Ready to take your world. Now listen to the song, watch the music video, and enjoy. The best is yet to come!