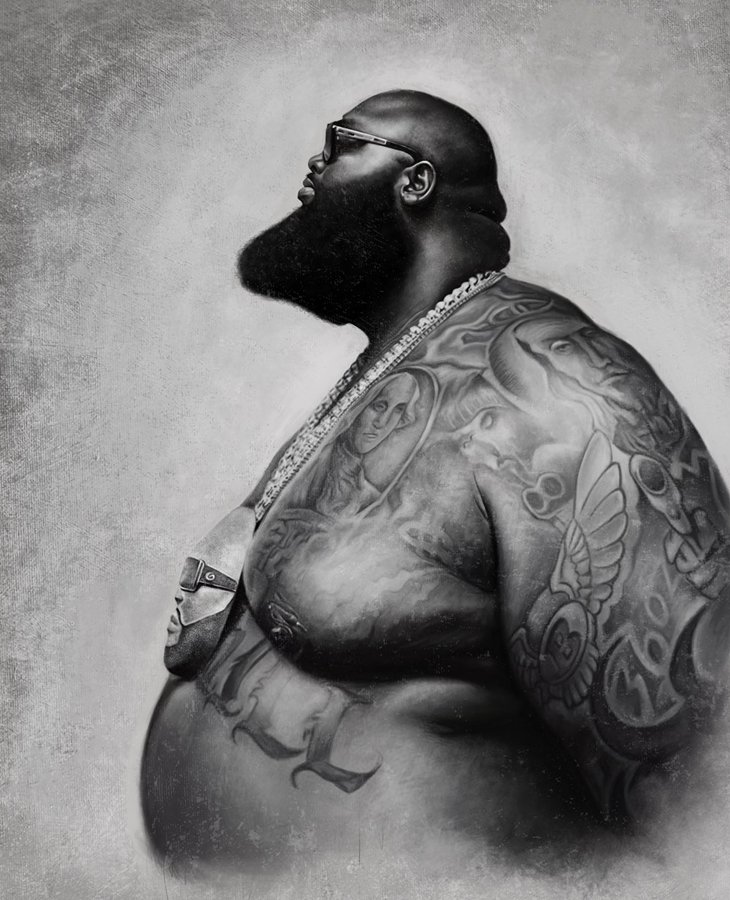 William Leonard Roberts II (born January 28, 1976), better known by his stage name Rick Ross, is an American rapper. He derived his stage name from the drug trafficker "Freeway" Ricky Ross. Ross founded the record label Maybach Music Group, on which he released his studio albums Deeper Than Rap ,Teflon Don, God Forgives, I Don't, Mastermind, Hood Billionaire, Black Market, Rather You Than Me, and most recently Port of Miami 2.

After being signed to Suave House Records, former label for rap duo 8Ball & MJG, he eventually signed a deal with Slip-n-Slide Records, which has been under the Def Jam umbrella since 2006. While signed to Slip-n-Slide, Ross toured with fellow rapper Trick Daddy and made guest performances on other Slip-n-Slide rap albums

His debut album Port of Miami was released in August 2006 and debuted at the top spot on the Billboard 200 album chart, with sales at 187,000 units after its first week

In March 2008, his second album Trilla was released and, as its predecessor Port of Miami had, debuted at the top of the Billboard 200. Its lead single "Speedin'" featuring R. Kelly peaked at #121 on the Billboard Hot 100; the next one, "The Boss" featuring T-Pain peaked at #17 on the Hot 100. The third single "Here I Am" featured Nelly and Avery Storm

Deeper Than Rap is the third studio album by American rapper Rick Ross, released April 21, 2009 on his label Maybach Music Group and Slip-n-Slide Records, with distribution from Def Jam Recordings. The album debuted at number one on the U.S. Billboard 200 chart, selling 158,000 copies its first week. Singles from the album were: Mafia Music, Maybach Music II, Magnificent, & All I Really Want.

Teflon Don is the fourth studio album by American rapper Rick Ross, released July 20, 2010 on Maybach Music Group and Def Jam Recordings. Production for the album took place during 2009 to 2010 and was handled by several record producers, including Clark Kent, No I.D., The Olympicks, J.U.S.T.I.C.E. League, Lex Luger, Danja, The Inkredibles, The Remedy, and Kanye West

The album debuted at number two on the US Billboard 200 chart, selling 176,300 copies in its first week. It attained some international charting and produced three singles with moderate Billboard chart success. Upon its release, Teflon Don received generally positive reviews from most music critics, earning praise for its cinematic production and Ross's lyrical persona.