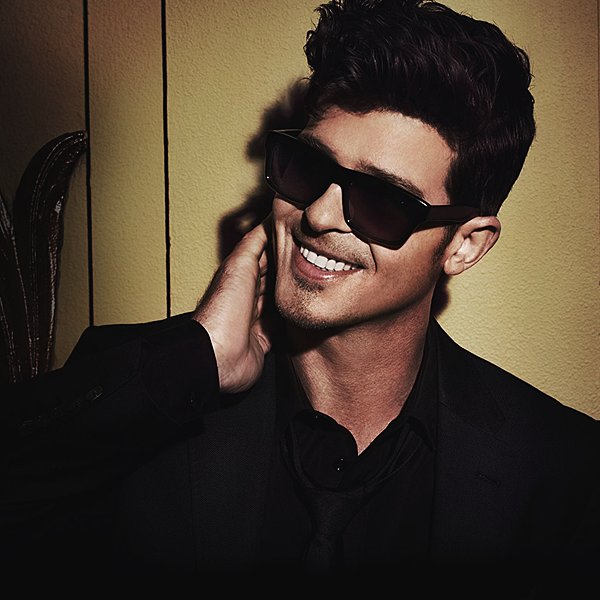 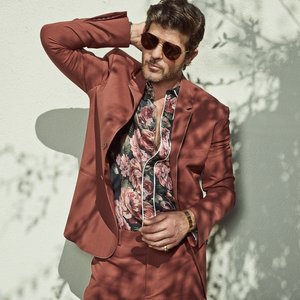 Robin Charles Thicke (born March 10, 1977 in Los Angeles, California) is a Grammy-winning American pop and R&B singer-songwriter, producer, and actor signed to Pharrell Williams' Star Trak label. Also known for being the son of performer Alan Thicke, he released his debut album, called 'A Beautiful World', in 2003. He has gone on to release 2006's 'The Evolution of Robin Thicke', 2008's 'Something Else', 2009's 'Sex Therapy', 2011's 'Love After War', 2013's 'Blurred Lines', and 2014's 'Paula'. He was married to actress Paula Patton until their 2014 divorce, and they have a son named Julian Fuego, born in April 2010.

Alan Thicke married actress Gloria Loring, known for starring in programs such as 'Days of Our Lives', in 1970, and he had the two sons Brennan Thicke and Robin Thicke. Half-brother Carter Thicke would become another member of the clan years later after Alan Thicke divorced and remarried. Brother Robin grew up in a household filled with music, with his dad being a singer (of tracks such as "Thicke of the Night") as well as a co-composer for several TV show theme songs and a seminal actor on both the big and small screens (examples being the shows 'Growing Pains' and 'How I Met Your Mother').

The young Robin Thicke taught himself to play piano at the age of twelve. Even at the age of fourteen, he found that he could play just about anything that he heard on the radio, feeling a drive to keep going further. Before his days as a singer-songwriter performing his own material,Robin Thicke wrote songs for the soul and pop groups 3T (with 1995's "Sexual Attention" bringing Thicke alongside Damon Thomas), Brownstone (with 1997's "Around You"), and Color Me Badd (an example being 1996's "Sexual Capacity"). He also collaborated with the acclaimed production duo of Jimmy Jam and Terry Lewis on several songs for Jordan Knight's 1999 self-titled album. Thicke seemed to receive a great omen when Knight's album was certified Gold and gained huge fan acclaim.

In 2000, Thicke went to work on material for his debut album, which ended up being titled 'A Beautiful World'. The album focused more on blue-eyed soul than his pop-centered offerings for other artists, and he mixed in influences from eclectic funk (in the vein of the British group Jamiroquai) and and modern neo-soul music (in the vain of Canadian crooner Remy Shand). Thicke hoped that he was primed for huge things by late 2002 when the album became ready for release.

Thicke's lead single, called "When I Get You Alone", had a distinctive music video made for it. The disco and slick rnb fueled track sounded rather unlike the commercial pop ethos of the time, having a distinctive sampling of Walter Murphy's 70s dance music hit "A Fifth of Beethoven" (which itself had been inspired by Beethoven's Fifth Symphony). The video featured an unshaven Thicke, with long, grungy hair, as a courier racing through the streets of Manhattan on a bicycle. It received some rotation on MTV 2 and BET's "Rated Next", the song being spun moderately on urban radio. On the Hot 100, it reached #29 quite quickly, yet it fell out the chart just as fast. Globally, however, the song was quite popular. With his single peaking at #17 in Australia, #15 in Belgium, #15 in Italy, #8 in New Zealand, and #5 in the Netherlands, Thicke felt that he wanted another shot at the 'big time' in the U.S.

Devising the re-release of this album, which it then gaining its final title of 'A Beautiful World', Thicke added a few extra songs that he seemed confident of. Yet the album received very little corporate promotion, irritating Thicke despite the release of a second single, a Prince-like groove mixing funk with rock called "Brand New Jones". The album debuted at #152 in the Billboard 200 and didn't do much from there, selling a mere 59,000 copies. Still, his work ended up being received well by many critics and musical peers, with Trevor Nelson and Lil' Wayne (Weezy's 2005 release 'Tha Carter, Vol. 2' would even include some of Thicke's work) lauding Thicke's music, as well as many fans.

In 2004, artist Pharrell Williams asked Jimmy Iovine, CEO of Interscope, “What are you doing with Robin Thicke?” A few months later, Robin was recording a new single, titled “Wanna Love You Girl” with Pharrell in Miami, as a newly signed artist on Pharrell’s label, Star Trak Records. With the two musicians sharing the same love for genre-hopping, deliberately 'retro' music, the single immediately attracted the attention of radio and club DJs across the world after its August 2005 release. The song often given revamped names such as "Wanna Love U Girl", "Wanna Love You Girl (Feat. Pharrell)", and the like, it ended up doing very well in the U.K. in particular, hitting #5 on Trevor Nelson's BBC Radio 1 "Soul Nation" chart.

Now appealing more to the mainstream, Thicke cut off his trademark long hair in an attempt to further recreate himself. By October 2006, when his second album, titled 'The Evolution of Robin Thicke', came out in its entirely, he had built up a ton of momentum, and his work paid off. Thicke earned the #1 slot on the Billboard Top R&B/Hip-Hop Albums chart, and additional singles such as "Got 2 Be Down" and "Lost Without U" saw huge fan responses. As the months went by, his album even earned platinum certification by the RIAA.

Having 'made it' in the truest sense commercially as well as critically, Thick remarked, "My greatest desire with this album was to write songs that were completely honest and sing them with the emotion I was feeling when I wrote them, so that whoever listens to my music is brought as close to my experiences and life as possible."

With this intention, Robin created songs such as, “Lost without You” (the second single). An instant classic, this song is about Robin’s insecurities and his need to be desired and loved. With sweeping vocals over rhythmic Spanish guitar, this song takes you away and makes you sing along.

On the psychedelic, “High School Man” is where Robin infuses rock and hip-hop and poetically admits “I’m a hater” as he hates on those with more success than him realizing, ironically, he just wants what they have.

Finishing off The Evolution of Robin Thicke is the hopeful and encouraging “Thank You.” On this gospel inspired, piano ballad Robin sings, “maybe I’m the one who never gets up ‘till he falls,” making the discovery that he has to be thankful for everything that comes into his life…the tears, the joy, the failures and the successes.

Always carrying a heavy heart, Robin taught himself to play piano at the age of twelve so he could have an outlet to express himself. By the age of fourteen, he could play anything he heard on the radio. At sixteen, with no formal training, Robin began professionally writing and producing music for recording artists like Brandy and Brian McKnight. Over the years he has amassed dozens of gold and platinum records with artists including Usher, Mary J. Blige, Michael Jackson and Christina Aguilera.

Reflective, redemptive, passionate and etched with a soulfulness that is undeniable, The Evolution of Robin Thicke is an imaginative and heart-felt album that you cannot help but be moved by, bob your head to and smile throughout.

The album was released on October 3rd, 2006 and includes songs with Lil Wayne and Faith Evans, as well as Pharrell. The song "Got 2 Be Down" featuring Faith Evans was recently leaked (June '06). There will be two to three more videos released before the album comes out. Lately, there was a Busta Rhymes remix video shot for "Wanna Love You Girl," a Lil’ Wayne feat Robin Thicke "Shooter" video, and Robin has released the video for "Lost Without You," making that song the official 2nd single of the album.