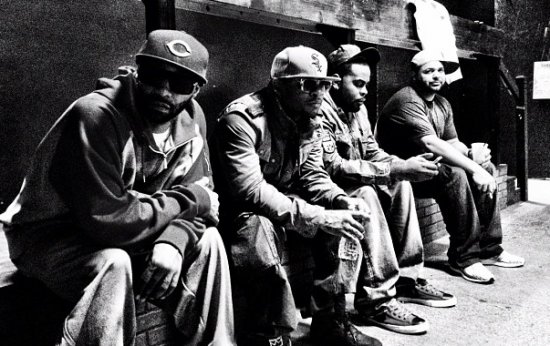 There are several bands with the name Slaughterhouse:

The members of Slaughterhouse all share some degree of controversy from their past in the music industry. Crooked I (Long Beach, CA) was signed to Suge Knight's Death Row label from 1999-2003, but left after his projects were shelved amidst the disintegration of the label due to Knight's continuing problems with the law. Joe Budden (Jersey City, NJ) had initial success when he signed to Def Jam in the early 2000s, but for reasons unknown, fell out of favor with Jay-Z when the latter became head of the label. Budden eventually left Def Jam and released a diss track to Jay-Z entitled "Talk to 'em." Joell Ortiz (New York, NY) was signed to Dr. Dre's Aftermath label but left after he was informed that his album would not be released until both Eminem and Dr. Dre released their respective projects. Finally, Royce Da 5'9" (Detroit, MI) is known for his falling out and feud with Eminem and D12, though the two sides have since reconciled.

All four men address these issues in the Slaughterhouse song "Move On (Slaughter House Remix)," informing any interviewers out there that their pasts are behind them and that questions pertaining to these events are not relevant. A video for the song was released in March 2009.

Their self-titled debut album, Slaughterhouse, was released on August 11, 2009 on E1 Music. The album was reportedly recorded over a six day period in early June. The album features production from Focus, The Alchemist, DJ Khalil, StreetRunner and D12's Mr. Porter.
On June 18th, 2009, the first street single off the album was released via Joe Budden's twitter. The track is "Hood Hop" (formerly known as "Woodstock") and features M.O.P. on the hook.
The first official single from the album will be "The One". A video directed by Rik Cordero has already been shot.
It was announced that "Woodstock" will not be on the final cut of the album due to sample clearance issues.
The debut album by Slaughterhouse was leaked to the internet late Friday, July 31st.