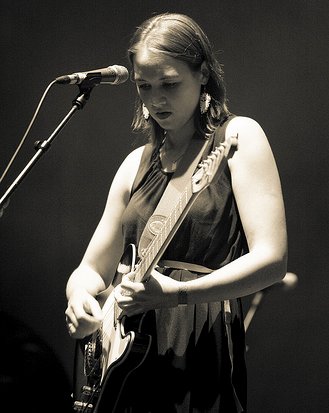 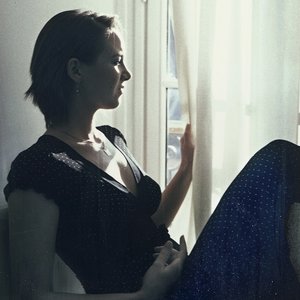 Sophie Hunger is a pseudonym of Emilie Welti (b. 31 Mar 1983, in Bern), a multi-instrumentalist singer-songwriter, based in Zürich, Switzerland. She made her recording débuted, as Emilie Welti and a member of Fisher, on their eponymous "Fisher" (2005). Her first solo album was "Sketches on Sea" (Sept 2007, Two Gentlemen) and her latest is "The Danger Of Light" (Sept 2012, Two Gentlemen).

Her independently released second album "Monday's Ghost" (2008) stayed at the top of the swiss charts for several weeks and caught the attention of critics abroad. The Guardian described her as "Laura Marling, Beth Orton and Björk in one folk-rocking package".

The Swiss singer spent parts of her youth abroad, living in England and Germany. Her cosmopolitan biography is reflected in her multilingual songwriting. While most songs are in English or German language, each album contains one song in a Swiss German dialect. Her third studio album 1983 (2010) also includes a cover version of Noir Désir's Le Vent Nous Portera in French language.

Hunger has always worked in a collaborative spirit, and her many musical interests have led her to a fascinating geographic and personality mix. While she had recorded her solo début "Sketches On Sea" at home in just a few days, her latest album "The Danger Of Light" evolved over three sessions abroad. In Los Angeles she was joined by Josh Klinghoffer (Red Hot Chilli Peppers, PJ Harvey), Nathaniel Walcott (Bright Eyes) and Steven Nistor (Danger Mouse); in Montréal Howard Bilerman (Arcade Fire), singer/songwriter Mark Bérubé, Brad Barr (The Barr Brothers) und David Payant (A Silver Mt. Zion) jammed along. That last session from Hotel2Tango-Studio in Montréal is included on the Deluxe Edition of her latest release.

Rapidly gaining a reputation as an electrifying live performer, Hunger has been sharing stages with some of Switzerlands’s most successful artists, like Erik Truffaz, The Young Gods, Kutti MC or Stephan Eicher and appearing at locations such as Olympia in Paris, Miles Davis Hall at the Montreux Jazz Festival or the John Peel Stage at Glastonbury Festival.

The musical directions of Sophie Hunger are limitless, from traditional folk songwriting bathed in jazzy moods to soul balladry. Her musical universe is very flourished, nourished by an exceptionally fragile yet mature voice as well as an ability to cross genres. For Sketches On Sea, she collaborated with a great number of musicians, from a trombone player to a flamenco guitarist. Sophie’s technical prowesses can lead her anywhere and allow her to do things that nobody else could get away with.

Sophie Hunger also contributed the soundtrack to the documentary "Zimmer 202" and the movie "Der Freund" by Micha Lewinsky.