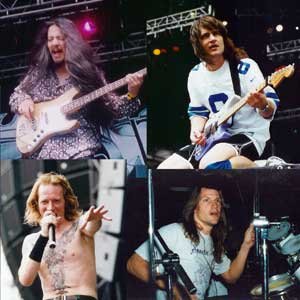 SPASTIC INK was formed in 1993 by San Antonio, TX based guitarist Ron Jarzombek following the demise of his previous band, Watchtower. Joined by brother/drummer Bobby Jarzombek and bassist Pete Perez (both of Riot at the time), the trio cut a demo tape in 1994 but was unable to land a record deal and procure the necessary finances to re-cut the material as the music was deemed 'not commercially viable' by the labels they had approached. Eventually, the band signed a license deal with Germany's Dream Circle label for the release of the original demos, slightly cleaned up and in parts re-recorded by Ron Jarzombek. 'Ink Complete' was finally released in 1997 and later re-issued by Jarzombek's own EclecticElectric label in 2000 with 25 minutes of 'work tapes' added as bonus.

Work on a follow-up would prove tedious as Ron was forced to expand the original 3-piece line-up due to Bobby and Pete's commitments with Riot and Bobby joining Halford, the new band formed by former Judas Priest vocalist Rob Halford in 2000. Both Sean Reinert (Cynic, Gordian Knot) and Asgeir Mickelson (Spiral Architect) were set to cut drum tracks at one time or another but backed out. With the album in limbo, Ron Jarzombek turned his attention to doing a solo album, 'Solitarily Speaking of Theoretical Confinement' (2002), utilizing programmed drums and playing everything himself. Eventually, Ron would re-focus on Spastic Ink, with both Dave Penna and Jeff Eber of Dysrhythmia contributing drum tracks and brother Bobby cutting the rest of the tracks in between work with Halford. Jarzombek also got contributions from fellow guitarist Marty Friedman (ex-Megadeth), Pain of Salvation vocalist Daniel Gildenlöw, Watchtower band mates Jason McMaster and Doug Keyser, bassists Pete Perez, Sean Malone (Cynic), Ray Riendeau (Halford, Machines of Loving Grace), and Michael Manring (Michael Hedges, Attention Deficit), as well as keyboardists Jens Johansson (Stratovarius), Jimmy Pitts (Scholomance, The Fractured Dimension), and David Bagsby. 'Ink Compatible' was released in 2004 via Jarzombek's EclecticElectric label and Avalon/Marquee in Japan.

No further Spastic Ink activities have taken place since and Ron Jarzombek would go on to form all-instrumental technical death metal outfit BLOTTED SCIENCE with Cannibal Corpse bassist Alex Webster in 2005. They released their debut album, 'The Machinations of Dementia', on EclecticElectric in the fall of 2007 with Charlie Zeleny (ex-Behold... The Arctopus) on drums.